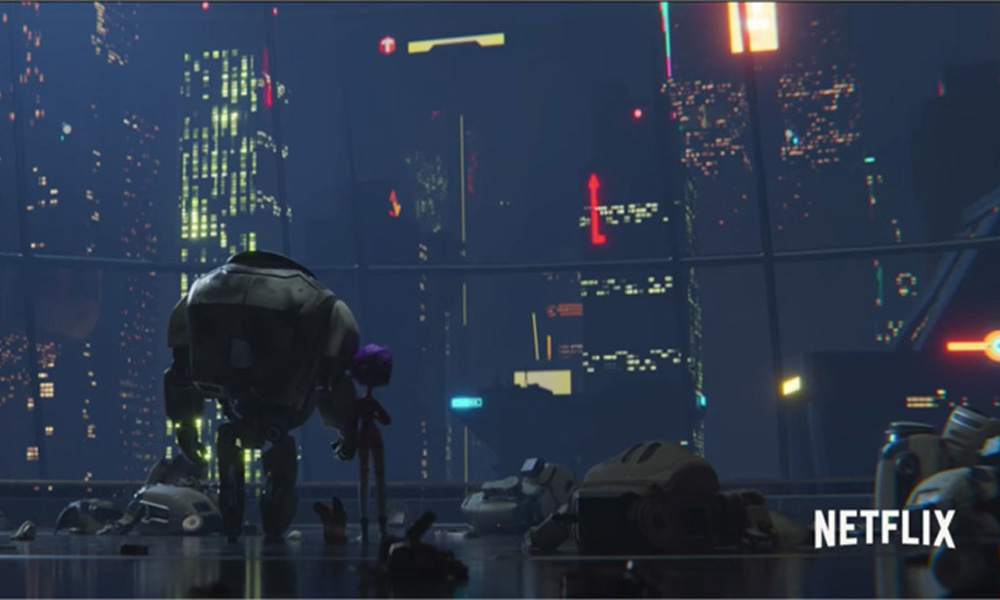 This Friday, Netflix will debut the new CG-animated feature Next Gen, written and directed by Kevin Adams and Joe Ksander, which features the voices of John Krasinski, David Cross, Michael Pena, Charlyne Yi, Jason Sudeikis and Constance Wu. The movie an animated action-adventure film about the bittersweet power of memories. It tells the story of an unlikely friendship between a rebellious girl and a runaway combat robot, as they unite to stop a madman’s plan for technological world domination.

The streaming service received a lot of attention for paying $30 million for the film rights after a competitive bidding war at the Cannes Marché du Film, one of the biggest deals at the French market this year. Next Gen is based on the original comic 7723 by Wang Nima. Baozou financed the film and produced with Toronto-based Tangent Animation, known for the animated movie Ozzy, directed by Alberto Rodriguez.

Adams and Ksander recently took the time to answer some of our questions about their movie. Here is what they had to say:

Animag: Please tell us how you came up with the idea and script for the movie.

Kevin Adams and Joe Ksander: The movie was based on a short online comic from the Chinese multimedia company Baozou. It contained the core of the idea — what if every night, a robot had to choose which memories to keep and which to delete? That’s a cool, compelling high-concept hook. It was our job to make a world and a story that best took advantage of that hook. We asked ourselves, what is the perfect foil for a robot who doesn’t want to lose his memories? We came up with the story of Mai Su — a teenager with memories she’d rather forget. All of us are a little broken, in some ways. In the case of 7723 (also known as “Project 77” — our robot hero) we made him literally broken. So, we have two broken characters who need each other to survive. And then we added exploding robots.

Why do you think the movie generated such a huge interest at the Cannes market this year?

We’re not entirely sure! It’s been very cool and kind of crazy, but we’re really happy that people are responding to the film — and we’re stoked that Netflix has been so supportive of it. If we had to guess, our movie is a surprise to a lot of people. Going in, audiences think they know what they’re getting. And to be fair, it’s an unknown property from a new studio and new directors. But the more folks see of the movie, the more it subverts their expectations, and the more it delivers — on the emotional stakes and on the scope of the action. Audiences like to be surprised, I think. We definitely do, at least!

What do you think makes this movie special and different in your mind?

Next Gen is more of an action movie than most animated films usually are (though there are some great animated action films, they are seen as a bit of an anomaly). And, on top of that, we tried to ground the big epic stakes with an intimate and raw emotional story. For us, animation is a tool for telling a story, not a genre on its own, and we believe it has the capability to tell really rich stories in any genre. And though we think parents, kids and teenagers will find something to like this movie, we mostly made it for ourselves — so we put into it all the things that we love and wanted to see.

What would you say was the toughest aspect of this project for you?

The hardest part of the movie was the scope. We never write a first draft with budget in mind, but at some point you look at the project and start to cut back complexity so you can actually finish the project. For Next Gen, we were pretty sure we could get more value for money than on previous projects, so we took some gambles and decided to make the film regardless of how hard it looked to achieve on paper. It takes a certain fearlessness from the crew to try something like this, but we worked with the right combination of brave creative geniuses to pull it off. We readily admit we got very lucky with the amazing talent on this film. It was a sort of lightning in a bottle production.

Where was the animation produced? How long did it take from script to final delivery?

Animation was produced at Tangent Animation in Toronto and Winnipeg, Canada — a relatively new studio that is nonetheless staffed with some of the most talented, most experienced animation artists in the industry, many of who we worked with on 9. We also worked with House of Cool in Toronto, a world-class storyboard and design studio, and got some design help from Titmouse Animation. We came on the project as writers in December of 2015, and delivered the final prints August 2018.

Which tools were used in the animation pipeline?

The film was mostly animated, rendered and composited in Blender, an open-source animation package. There were other tools as well, like Houdini and FumeFX for VFX, Photoshop and After Effects for motion graphics, Avid for editorial, whiteboards, animation paper and light-boxes … ultimately it was the artists and their eyes that made the film looks and feel the way it does!

What was your ballpark budget for the movie? How many people worked on it?

The budget was pretty lean for a project of this size. I think people are going to be surprised at what we were able to pull off for the amount. All told, about 350 people touched the film at one stage or another, with the crew being about 200 people at its largest point in production.

What were some of your visual influences?

We like to say we wear our influences on our sleeves, but we did try to give this film it’s own unique look and feel. Working with our production designer Craig Sellars and art director Richard Chen, we were inspired by the neo-noir films of the 1970s, like The French Connection and The Parallax View. And then there is the unavoidable psychic imprint of the Amblin films and the work of James Cameron of the 1980s. We combined that with a heavy dose of Japanese anime, especially the classics we grew up with like Akira, Macross, Cowboy Bebop and Mobile Suit Gundam. Our sci-fi city is the spiritual love-child of Blade Runner‘s Los Angeles and the real-world cities of Shanghai and Guangzhou. And, because consumer products play a big role in the movie, we went a bit retro-future and referenced a lot of the computer equipment of the late ‘70s and early ‘80s — we wanted to get that Commodore and Atari vibe for our robots.

The animation environment has changed a lot since your days on 9…what is your take on the overall scene today?

The animation industry is at an interesting place. The big studios are really dominating the market, and because of various mergers, etc. there are even less of them then there used to be. That being said, there is more animation being produced now than at anytime in history, and more opportunities for new voices and new styles. Technology also democratizes the process a bit, so you can make high-quality films outside of the traditional pipelines, if you have the vision and the will. And with streaming services like Netflix, there is a big hunger for more and more content. But animation is a really difficult and time-consuming process, no matter what medium or source of funding you are working with — which makes it expensive and slow, which make people (naturally) risk-averse. This was an issue back when 9 came out, and is definitely still an issue. Luckily, filmmakers themselves always seem to be interested in trying new things, both at the studio level and on the independent stage. Filmmakers with vision and backing are the ones making things worth watching — Your Name, Incredibles 2 and The Breadwinner could not be more different, but are all amazing films.

You can’t put in the time an energy required to do a project like this unless it is something you personally love. We made the film that we wanted to see, trusting that the love and care we put into would show on screen. We hope the film finds an audience that loves it as much as we loved making it.

What was the animated movie and/or character that changed your life?

The big ones for both of us are Ray Harryhausen’s Cyclops from The 7th Voyage of Sinbad and the water pseudopod ILM created for [James] Cameron’s The Abyss. Because these characters lived side-by-side with real human actors, they helped us understand that making movies was only limited by what we could imagine (and what we could execute, natch). Everything else was just negotiation and design.

There is so much animation being produced these days. What is your advice for artists and animators who want to make it in this highly competitive scene?

The good news is there are so many more ways to find an audience. Bad news is there’s a lot of noise that signal has to cut through. The best way to get noticed is to do something good — the best way to get good is to spend time on the things that you love. The amount of work that goes into animation — and really, into all filmmaking — is so huge and so onerous, that if you don’t love it, it will eat you up. But if you do love it then it can hardly be called work, because you’d be doing it anyway. After that, the hard part is convincing people to pay you for it. So while that’s no guarantee — it’s probably your best shot.

Next Gen premieres on Netflix this Friday (September 7). 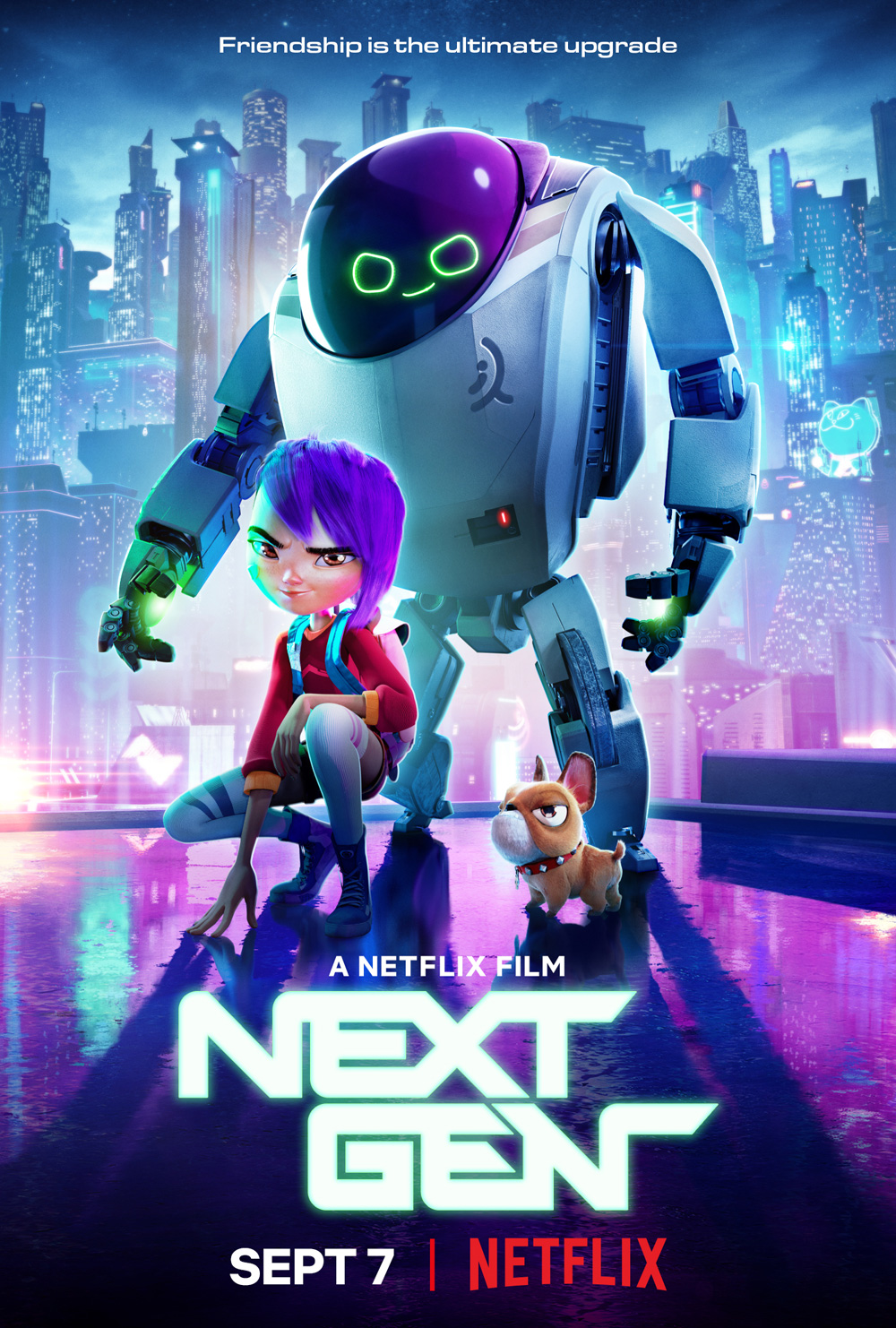