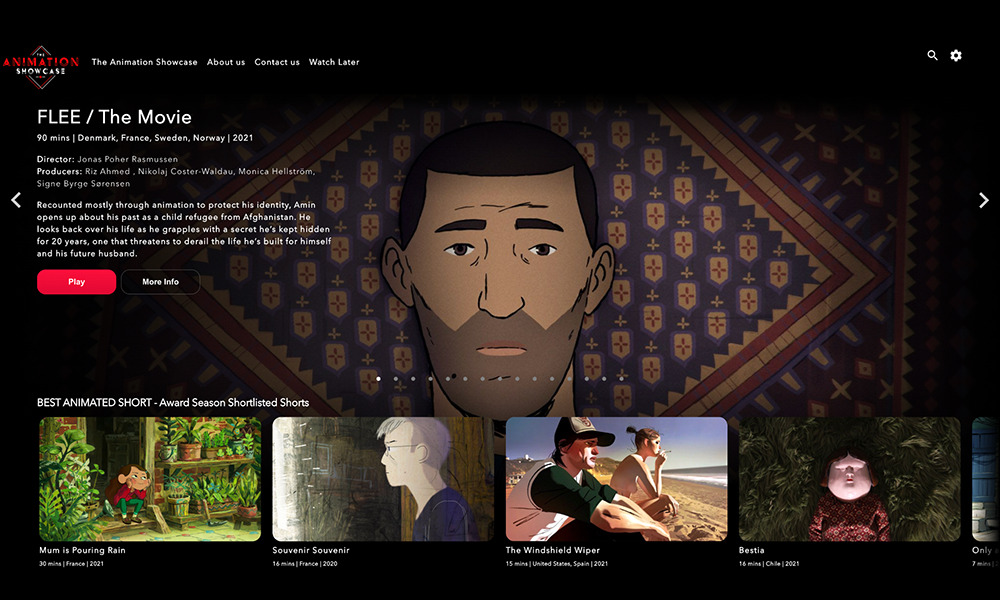 Sundance- and Annecy Cristal-winning animated documentary Flee is now accessible to watch worldwide on The Animation Showcase, the industry-only streaming platform, along with most of the animated short films that have been shortlisted by the Oscars.

“I couldn’t be more proud to introduce Flee to our collection and make this moving film accessible to global members of the motion picture industry,” said Benoit Berthe, CEO, The Animation Showcase.

Directed by Jonas Poher Rasmussen, Flee is a moving documentary based on the true story of Amin, a refugee forced to flee Afghanistan as a child. The animation medium allowed the director to tell Amin’s story while protecting his identity.

The film has been honored by film festivals and critics groups across the country and the world, including the Sundance Film Festival, Annecy International Animation Film Festival, National Board of Review, British Independent Film Awards, Gotham Awards, Los Angeles Film Critics Association, the Cinema Eye Honors and many more. It was released in U.S. theaters by NEON and Participant on December 3, 2021 and will expand throughout January. It opens in the U.K. on February 11 and in France on June 15.

Executive produced by and voice starring Riz Ahmed and Nikolaj Coster-Waldau, Flee was an official selection for Cannes 2020 and made its debut on opening night of Sundance in the World Documentary Competition. The film not only received four Annie Awards nominations, including Best Animated Feature – Independent, but was also shortlisted in both the Best Documentary Feature and Best International Feature category for the 94th Oscars as well as being considered a frontrunner in this year’s Best Animated Feature category. When Oscar nominations are announced on February 8, Flee could make history if nominated in all three categories.

The Animation Showcase specializes in spotlighting and promoting the best creations from the animation industry, short films and documentary shorts from filmmakers around the world. Since its launch two years ago, the platform has become a must-watch stop during awards season, featuring critically-acclaimed films as well as behind-the-scenes featurettes, exclusive filmmaker interviews and other bonus materials. Flee is the second feature length film to stream on the platform, following Calamity Jane last year.

Animation industry professionals can watch Flee by requesting a membership to The Animation Showcase here; applicants must provide email address and proof of work (IMDb, LinkedIn, Vimeo or other).