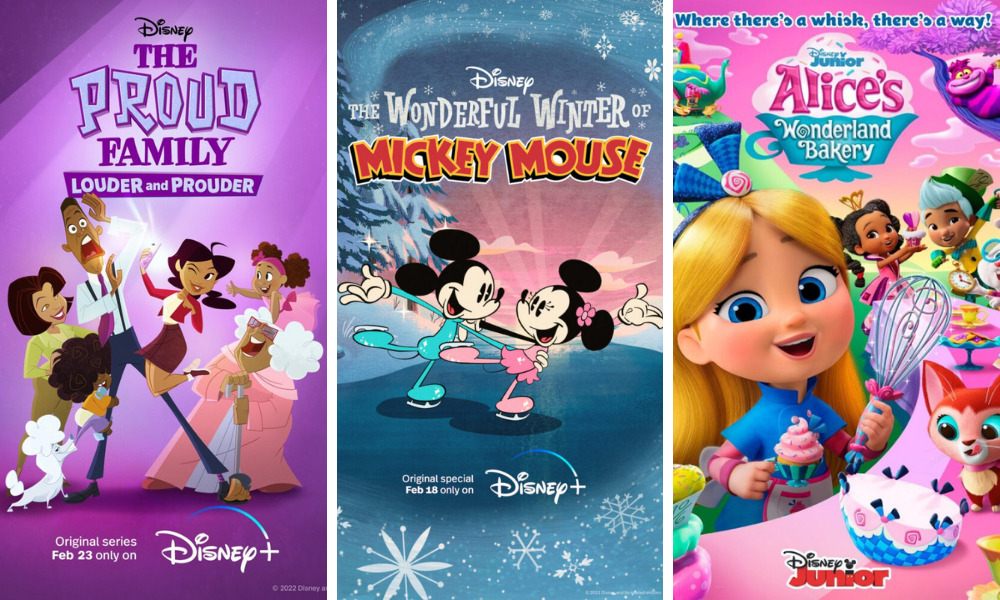 That’s right, another new month promising fresh animated fare is on the horizon! Here’s a look at what the Mouse House has planned across its linear and streaming outlets.

Fans of a certain groundbreaking Disney Channel series are counting the days until The Proud Family: Louder and Prouder reboots Penny’s daily adventures with her friends and family on Disney+ on February 23. And the studio’s classic characters get a chill new special, The Wonderful Winter of Mickey Mouse, debuting on February 18.

Meanwhile, over on Hulu, fans have a chance to revisit favorite animated movies and catch fresh seasons of a variety of shows on the streamer. New library titles and those departing at the end of the month include:

Disney Channel and Disney Junior are also welcoming a new take on familiar faces with the delicious debut of Alice’s Wonderland Bakery on February 9. Then, Cricket and the Green clan celebrate their third season premiere on February 12. The television premieres lineup animation highlights include:

The Cheshire Cat puts in a colossal order with Alice for a picnic that he is hosting in the Tulgey Wood, but when Alice and friends come across him in the woods, it seems his party might be a bit lonelier than he let on.

When Alice becomes overwhelmed with orders at the bakery, Fergie offers to help but cuts corners to meet deadlines, and his pies turn into a pie-tastrophy.

10:30-11:00 a.m. EST on Disney Channel/4:00-4:30 p.m. EST on Disney Junior, Alice’s Wonderland Bakery “No Palace Like Home/A Royal Remembrance” – Princess Rosa invites Alice, Hattie and Fergie for a royal sleepover at the Hearts Palace, but when Hattie’s bedtime routine is disrupted, Alice knows just the thing to make him feel better: a taste of home.

After an attempt from Rosa and Alice to recreate a beloved recipe for Rosa’s Abuelo, the King of Hearts, doesn’t turn out as planned, Abuelo assures the girls that the most important ingredient was the love they made it with.

9:30-10:00 a.m. EST on Disney Channel, The Ghost and Molly McGee “Ice Princess/Ready, Set, Snow!” – When a ghost causes an ice storm in Brighton, only Dad can save the town from eternal winter.

When Molly gets her first snow day, she struggles to give up on her perfect vision.

Rosa’s first camping trip goes awry when the Card Guards insist on accompanying her, and their overprotective nature interferes at every step of the way.

When a shy porcupine, Quilla, moves into town, the Chicken Squad do their best to make her feel welcome. Chrissie Fit (Pitch Perfect) guest stars as Quilla.

Nancy tries to prove herself on the farm. Bill struggles to relax at a fancy spa with Gramma. Karamo Brown (Queer Eye) guest stars as Kludge Steering Wheel.

9:30-10:00 a.m. EST on Disney Channel, The Ghost and Molly McGee “Game Night/The Don’t-Gooder” – The McGees let competition get the best of them during family game night.

When Andrea steals credit for Molly’s volunteer work, Molly tries to expose her.

10:30-11:00 a.m. EST on Disney Channel/4:00-4:30 p.m. EST on Disney Junior, Alice’s Wonderland Bakery “Gallymoggers Granola/Sour Grapes” – When Hattie eats too much of Cheshire Cat’s granola, he starts to disappear just like Cheshire, so Alice must find the perfect recipe to bring him back.

9:00-9:30 a.m. EST on Disney Channel, Big City Greens “No Service/Takened” – Cricket is halted at a convenience store due to their “No Shoes, No Service” policy. Eugene Cordero (Star Trek: Lower Decks) and Ken Marino (Fresh off the Boat) guest voice Clark and Dirk, respectively.

Dad struggles to stay true to himself when his twin siblings come to visit.