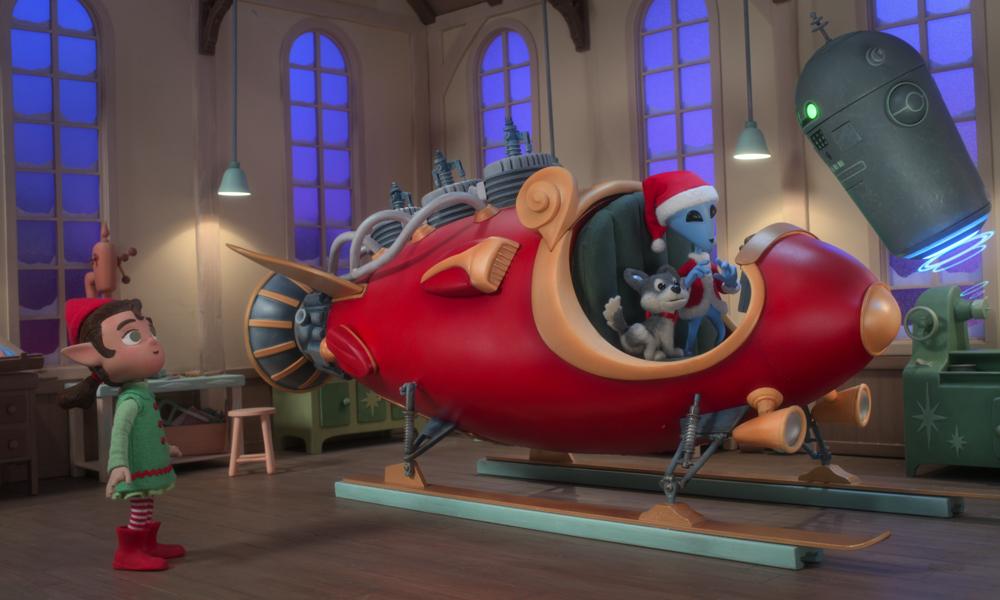 ***This article was originally written for the January ’21 issue of Animation Magazine (No. 306)***

We can’t think of a better way to end this crazy year than taking in the zany charms of the Chiodo Brothers’ new holiday special Alien Xmas. The 40-minute stop-motion special, which premiered on Netflix this Friday, November 20, centers on a special alien who decides to help protect Santa Claus and Christmas from some troublemaking extra-terrestrials. Based on a book of the same name by the Chiodos, the special is directed by Stephen Chiodo and produced by Edward Chiodo, who also exec produced with Charles Chiodo and Jon Favreau.

The L.A.-based Chiodos, who are well known for their stop-motion and puppetry work for a wide range of features and TV shows, including Tim Burton’s Vincent, Critters, Pee-Wee’s Big Adventure, Theodore Rex, Team America: World Police, The Thundermans and the 1988 sci-fi horror comedy classic Killer Klowns From Outer Space, were perfectly suited for this offbeat adventure. 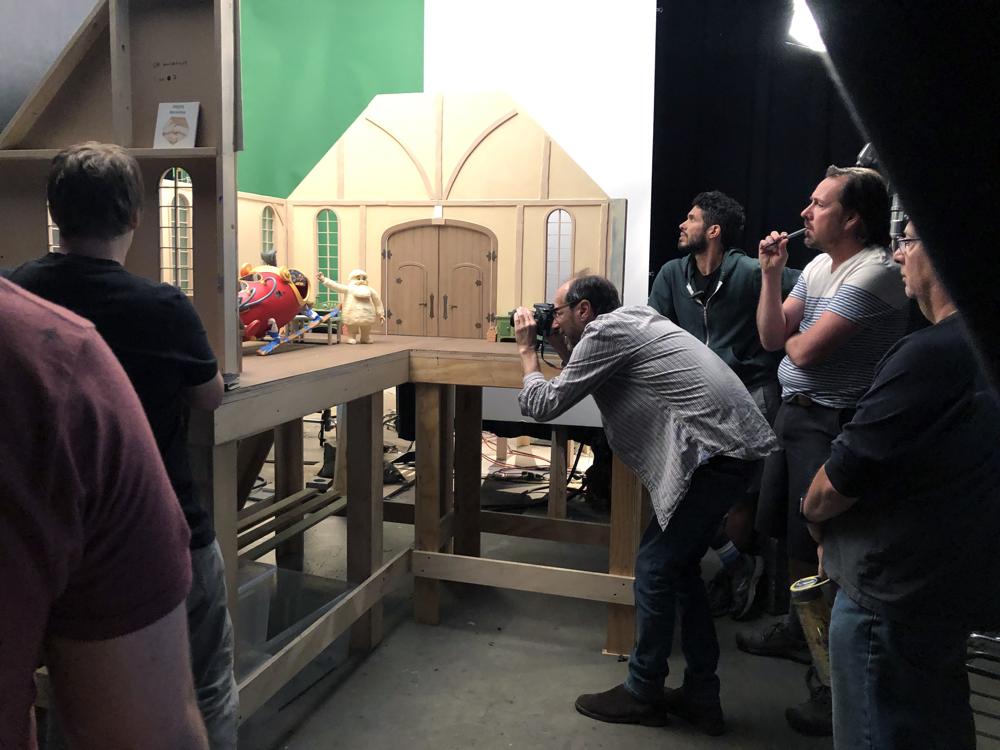 “We always wanted to create a holiday-themed special,” recalls Stephen Chiodo during a recent interview. “We were big fans of the classic stop-motion Rankin/Bass holiday specials like Rudolph the Red-Nosed Reindeer and Santa Claus Is Comin’ to Town. We were working on some interstitial spots for ABC Family/Freeform’s 25 Days of Christmas programs, and thought it would be great if we could come up with something of our own that mixes Christmas with sci-fi elements. We weren’t able to set up the project at the time, although there was a lot of interest. But we had all the characters designed and the artwork was ready, so thanks to our friend Mark Van Eaton who introduced us to Bob Self and his publishing company Baby Tattoo, we were able to publish Alien Xmas as a book about five years ago.” 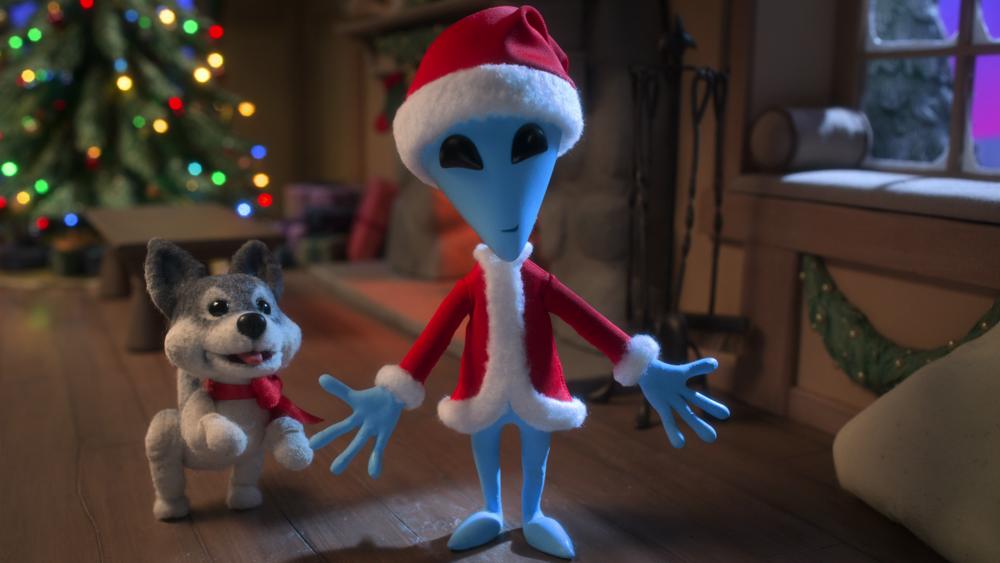 From Book to Stream

Chiodo points out that having Alien Xmas published as a book first gave it more bankability. Of course, when his friend actor/director Jon Favreau (who worked with the Chiodos on Elf) found out about the project, he knew he had to champion it and took it to Netflix. Finally in October of 2018, things really begin to move forward. The script by Kealan O’Rourke, Dan Clark and Noah Kloor was in place, and directors of photography Helder K. Sun and Aaron Wise, production designer Ean McNamara, art director Jeff Bartlett White, VFX supervisor Cameron Carson and animation director Cameron Baity all joined the production’s stellar creative team soon after. 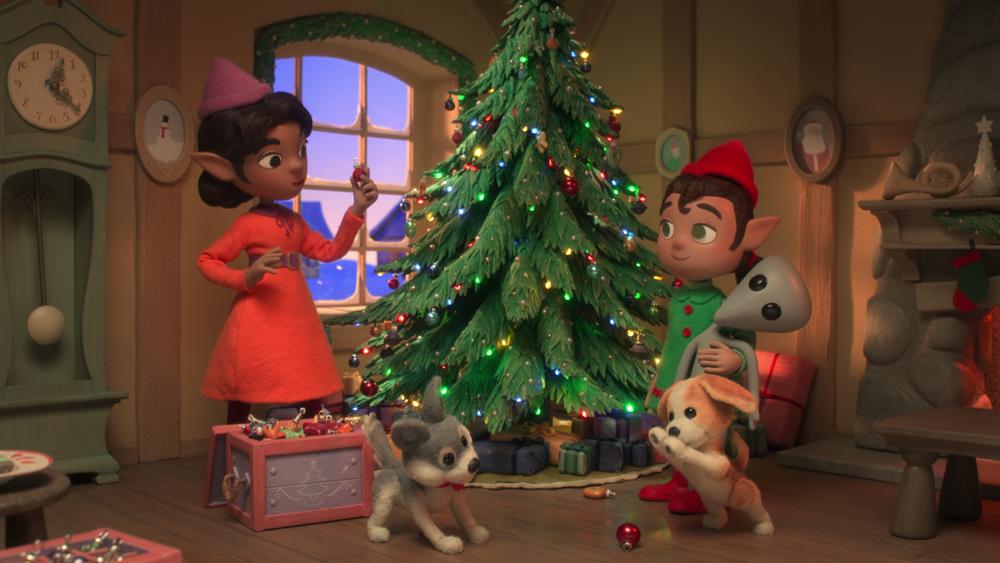 “We started animating in early June of 2019 and finished before Christmas of 2010 and finished the post this year,” says Ed Chiodo. “Including everyone who worked in post, we had about 300 people working on the show.”

About 150 silicone-based puppets were used to bring to life the special’s eclectic cast of aliens, elves, arctic critters, robots and Santa Claus! “Our head of puppets, Becky Van Cleve, did such a beautiful job of creating these puppets which ranged from five-inches to 10-inches tall,” says Stephen Chiodo. “The characters’ mouths were 2D-animated and added later in post. The more sophisticated alien ‘Swiss Army’ robot named Sam 2 that could transform to different apparatuses required more sophisticated replacement animation, involving lights and appendages.” 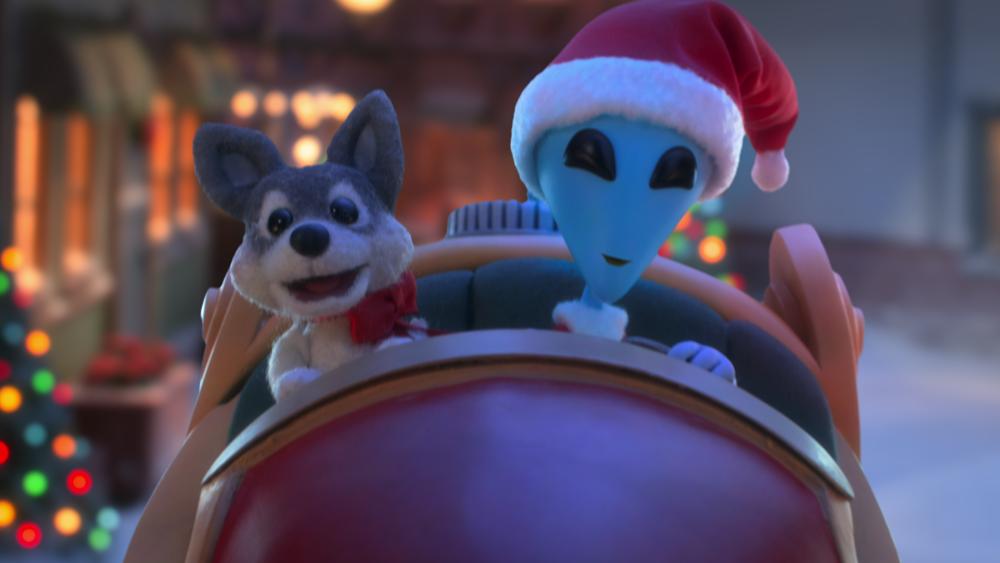 The challenging project involved a lot of different moving parts. Twelve animators worked on 16 stages and 20 physical sets throughout the production. Each animator was tasked with producing about eight seconds of animation each day. “We had to make sure our puppets weren’t any bigger than 12- to 13-inches tall because we wanted to maintain the size of the sets,” says Stephen. “Anything bigger than that would be unwieldy for the animators. Our main character X was only five inches tall, and we also had puppies that were about an inch long!”

As Ed Chiodo further explains, “From the get-go we wanted to embrace the traditional stop-motion animation that we grew up with, those Rankin/Bass holiday specials. We did use digital technology for sculpting and digital printing of puppets, but our goal was to have puppets on miniature sets. We didn’t want to lose the handprints of the makers by refining it too much. That was the kind of throw-back charm we were going for.” 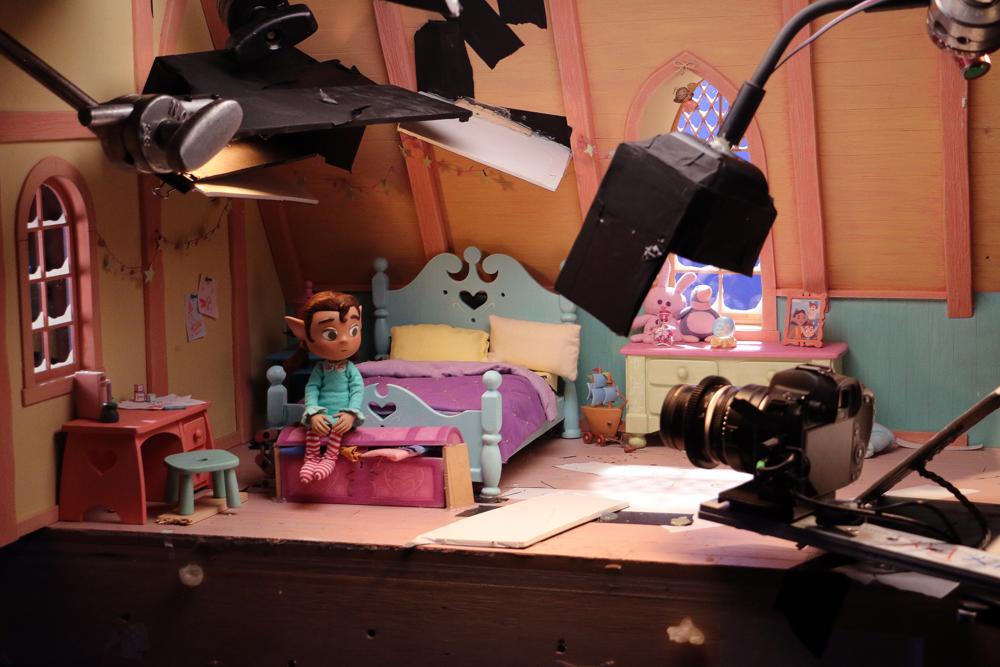 Dragonframe to the Rescue

“We started hand-sculpting with clay, but we realized that all the changes and tweaks we needed to do could be done much faster using [the digital sculpting tool] ZBrush,” says Edward. “So, we created the models and made molds and cranked out quite a lot of puppets. We also relied on the 3D printers and Dragonframe software to bring the puppets to life.”

Stephen admits that it was challenging to have to produce so much footage quickly. “About 95 percent of the shots are the first takes,” he notes. “The direction had to be very specific and our first efforts had to be successful. Our talented animators really hit it out of the park and were able to deliver such nuanced performances. We owe a lot to our fantastic production manager Eileen Kohlhepp, who stepped in and organized everything.” 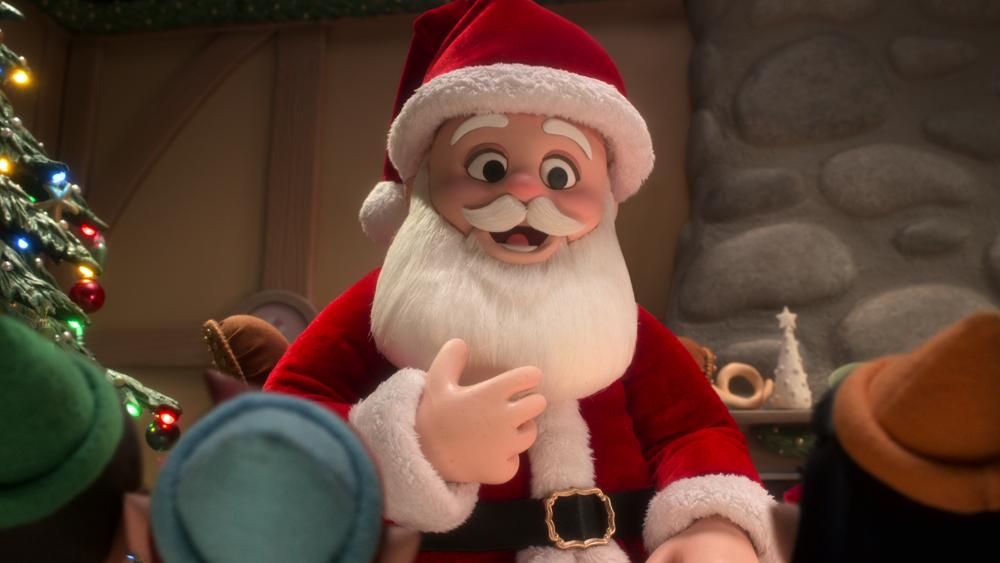 For the director, it was quite important to make sure Alien Xmas would not be your typical run-of-the-mill holiday special. “I mean, this is about mean aliens trying to steal gravity and then dealing with Santa and his elves, so we wanted to put a unique spin on the annual holiday fare,” says Stephen. “The story is about aliens battling Santa Claus, but we also wanted the message to be about the importance of giving and sharing at Christmas. We also tried to incorporate a little bit of that Chiodo subversive humor. For example, when Santa gets this idea of having a super sleigh which travels at the speed of light, you know that someone is going to be out of a job. So, that’s why the reindeer have this undercurrent of animosity about the whole thing! But in the end they come together to save Christmas and planet Earth!” 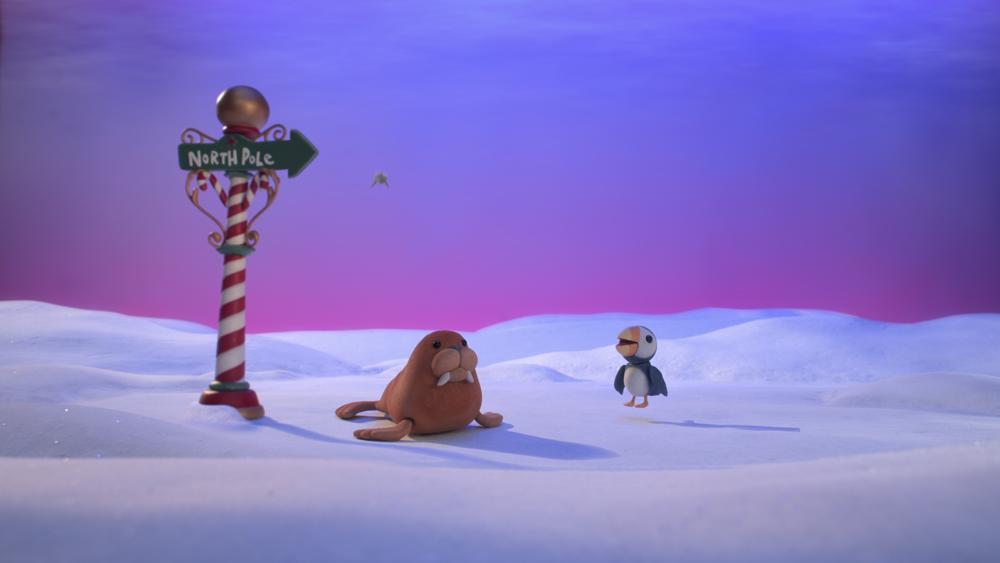 Thanks to Favreau’s participation in the production, eagle-eyed viewers will also get a fun throwback to another holiday favorite: Elf. “We wanted to pay homage to the arctic critter friends from the movie. So, we included a fun little bit of a wink by including a scene with Jon’s baby walrus and arctic puffin. It’s a little clip to make people smile and remember that movie. In addition to that, Jon was such a wonderful creative sounding board. He is a natural storyteller and he knew exactly what the charm of the book was and how to translate it to a longer stop-motion project. He helped me a lot as a director and kept us all on track with the heart of the story.”

“We associate stop-motion animation with those classic holiday specials, so we hope that Alien Xmas will also find a place in people’s hearts along those favorites,” concludes Edward Chiodo. His brother chimes in, “We hope audiences will enjoy X’s discovery of the real spirit of Christmas, which is about giving, and that they will revive their warm memories of holidays past when they were younger and more innocent.”

Alien Xmas is currently available for streaming on Netflix around the world.