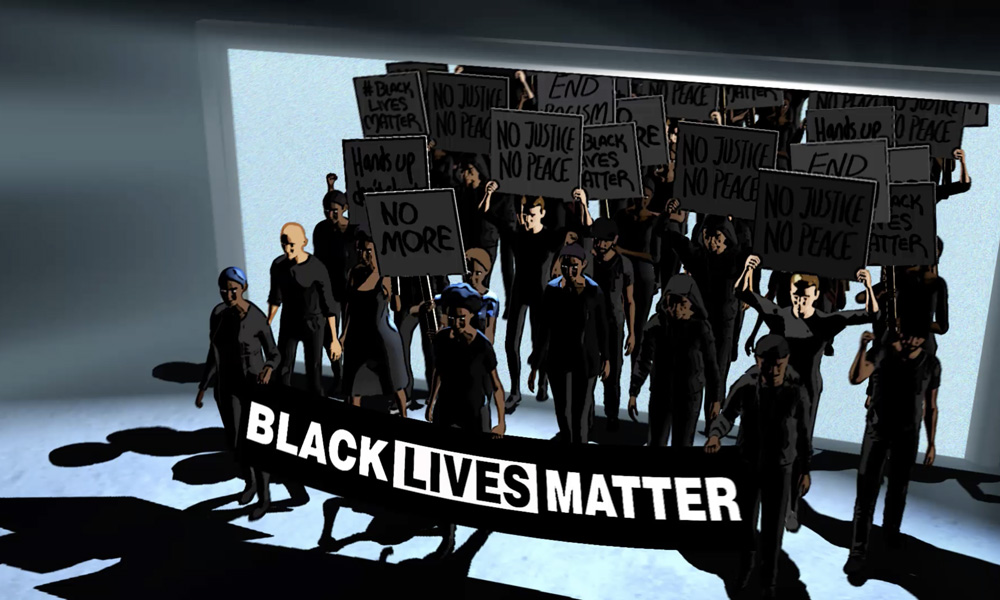 In honor of the recent one year anniversary of the clashes in Charlottesville, Virginia, creative design house the STUDIO teamed up with spoken word duo Kinetic Affect to create a powerful animated short set to the piece A Simple Question, commissioned by W.K. Kellogg Foundation. The result is a visually bold piece which launches an unpacking of pressing issues in America when a schoolboy asks his teacher, “Do black lives matter?”

“The poem was essentially our creative brief,” said the STUDIO Founder & Chief Creative Officer, Mary Nittolo. “Twelve through 24-year olds are our key target for this, and they’re generally not an easy audience to reach. We went with an aesthetic that blends a graphic novel-style with that of Latin American political art, which favors rough textures, vibrant colors, and closely resembles the immediacy of graffiti art.”

Gabriel Giron, a cancer survivor and former U.S. Army soldier who created Kinetic Affect with former high school English teacher Kirk Latimer, added: “We knew we wanted it to be animated, and when we talked with the STUDIO we came away feeling that the company and its mission were aligned with ours. As artists, we know not to get in another artist’s way. Honestly, when they presented their initial concept, we got choked up.”

Much like the “simple question” inspires complex introspection in the poem’s narrator, the short’s visuals evolve beyond simple realistic scenery through a series of thought-vignettes. Coming up with these complex visuals and impactful scene transitions fell to designer/director John Holmes.

“The graphic novel-style was one approach that we thought would work well for this because it lent itself to the gritty feel the piece demanded,” Holmes said. “We also used color as a hook – the saturated palette grabs the attention. We wanted to push the shadows and the backlighting to create these visually symbolic silhouettes.”

Holmes, along with 3D lead animator Eric Kilanski, used Maya for the 3D animation, as well as Adobe’s Photoshop and After Effects.

For Kinetic Affect’s Latimer, one of the keys to this piece working dramatically was structuring the narrative so that it was not saying outright, “this is wrong and here’s why,” but rather engaging in a back-and-forth conversation about these racial issues:

“We wanted to try and turn people’s immediate judgments and assumptions into something more like curiosity, which offers an opportunity to open the door to dialogue where it might not otherwise be open. That’s why we set this in a classroom and put the question into the mouth of a child.”

A Simple Question continues the STUDIO’s ongoing commitment to socially conscious projects. Over the past few years, the company has worked on numerous philanthropic efforts, including a series of videos for amfAR for World AIDS Day; a two-minute spot for MPOWERD, manufacturers of LUCI, an inflatable solar-powered lantern for energy-impoverished areas; and the animated short Scarlett for the Scarlett Contra El Cancer Center, which has been viewed more than 20 million times. They also recently completed a half-hour of animation for Emily Kassie’s documentary A Girl Named C about childhood sexual abuse; and they worked on recent projects for World Refugee Day, Coalition against Human Trafficking, ADCOLOR and Material for the ARTS.

“It is our privilege as artists to not just to use our skills to entertain but also to inform and teach, something that seems particularly relevant now,” said Nittolo. “The conversation this piece attempts to start is an important one. There are a lot of people today seemingly unable to come to terms with changes in this country, their perceived waning influence, and the dangerous effects their assumptions of privilege have on society as a whole. This film represents the internal struggle of one white male trying very hard to come to an honest and heartfelt answer. Hopefully, this will lead to others asking and answering questions, but above all engaging in dialogue.”