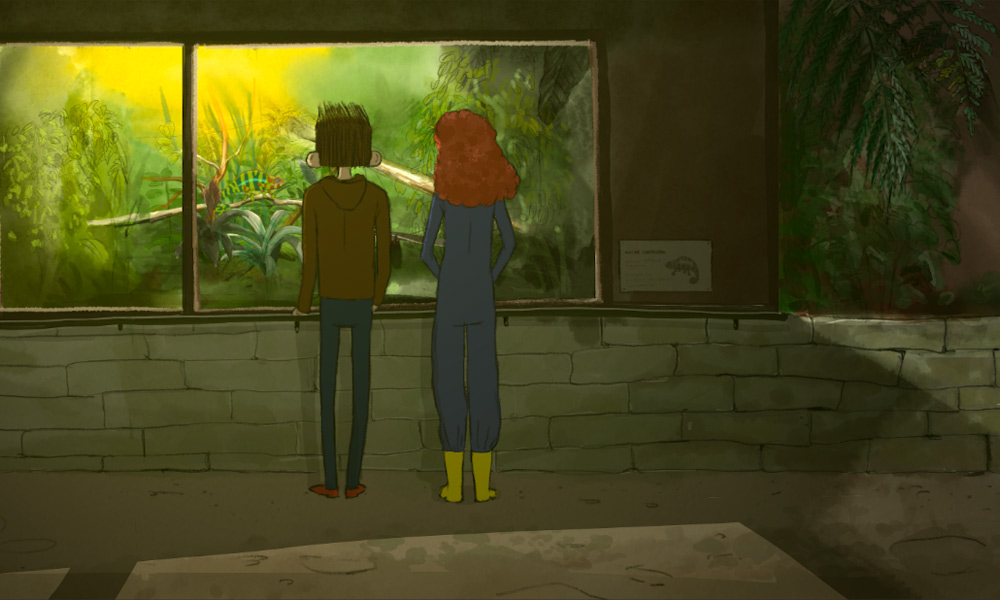 It’s no secret that the booming animated short format has allowed numerous artists to explore exciting, bold and risky subject matter in a variety of styles. Two of the year’s most thought-provoking shorts — Lisa LaBracio and Anna Samo’s The Opposites Game and Floor Adams’ Mind My Mind—take different approaches in tackling two timely and relevant topics in our lives today. The first examines the way we look at gun violence, while the latter offers an interesting way of illustrating the many daily challenges faced by someone with autism.

The Opposites Game is part of the TED-Ed series “There’s a Poem for That,” a youth and education initiative which features animated interpretations of poems that give language to some of life’s biggest feelings. With the help of poet and TED speaker, Sarah Kay, TED-Ed curated a series comprised of eight poems from contemporary spoken-word poets, and four poems by poets of the past. As a TED-Ed animation director, Lisa LaBracio took a peek at all the available poems and was specifically drawn to Brendan Constantine’s poem.

“This was my first time ‘meeting’ Brendan’s work,” says LaBracio. “When I first read The Opposites Game, Brendan’s exchange with his students made me laugh. I am also a teacher. I’ve taught art and animation to young people in New York City classrooms, homeless shelters and community spaces for more than a decade. Brendan’s poem reminded me of lessons I’ve done with my own students, how their ideas shape the entire lesson, and how often times they teach me something unexpected by the end of a class!” 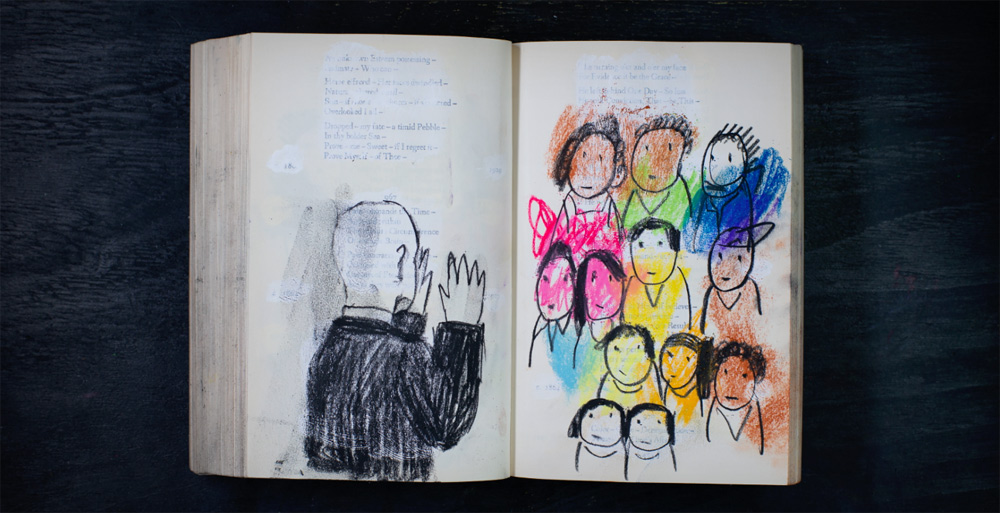 LaBracio says Constantine’s words also hit her in the pit of her stomach. “Gun violence touches the lives of most of my students, in and out of the classroom,” she explains. “I love that Brendan’s poem asks questions, not just of the students in his classroom, but also of the audience. And I love that he never answers those questions for us, or seeks to tell us how to feel.”

Samo, who grew up in Russia and lived in Germany for a long time, recalls being surprised when she saw “no guns” signs all around her neighborhood when she first moved to Chicago. “At first, I thought it was a joke, but soon enough the reality of the city and this land started to dawn on me,” she recalls. “The way I grew up, for me there is only one answer: There should be no guns in a civil world. And though after six years spent in this country I am able to better understand the complexity of this issue, my reaction is still the same.”

LaBracio and Samo began working on the short in the summer of 2018, and the two spent some time throwing ideas around before Samo did her first tests in August. The production wrapped at the end of last year and was first published in January of 2019. The directors knew that they wanted the animation to be tactile, to balance the innocence vs. profundity in the poem and to use the materials from the classroom. “We began by looking at chalkboard animations, and also William Kentridge’s animations and illustrations on book pages, and we were also looking at some blackout poetry,” says LaBracio.

The Opposites Game was animated directly under the camera and shot using Dragonframe. It was drawn frame-by-frame with charcoal pencils inside of a book — or to be precise, inside of nine books. “We began by painting out Emily Dickinson’s poems, whiting them out,” says LaBracio. “Then, working with charcoal pencils and dry pastel for splashes of color, we drew each frame, turned the page, and began a new drawing on the next one. We looked for ways to integrate some stop-motion elements — we folded the pages, crumpled them up, and cut into the book to bring more visual diversity into the film. We collected the remnants (the torn pages, the pencil shavings, the charcoal dust) and we cast these into our scenes along the way.” 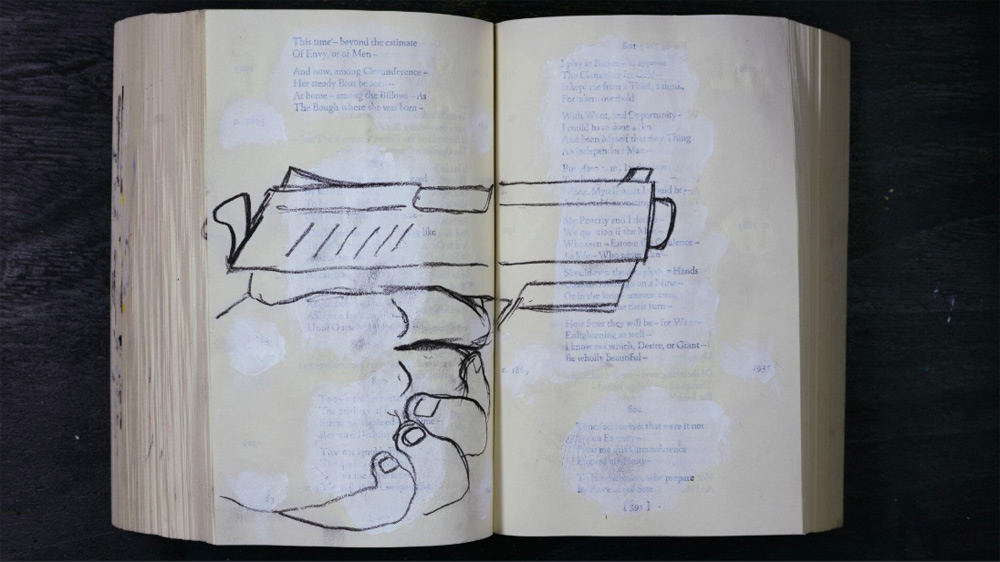 All the animation was produced and created in Samo’s Brooklyn home studio and LaBracio’s lower Manhattan studio at TED’s headquarters. The duo were the only animation artists to work on the visuals and concepts for the show, but they were also assisted by TED-Ed’s editorial and production teams who produced the entire series, as well as Weston Fonger of Yessian for sound design and, of course, the poet Brendan Constantine, who supported them on the entire journey.

The artists are quick to mention that one of the wonderful things about working with TED-Ed is that animators are given complete creative freedom with developing the concept and style of their shorts. “We also had a lot of freedom in how we presented our progress along the way. Instead of storyboarding, we started off with some simple animation tests that were done very quickly, but already contained ideas we would use in the film.”

They also point out that it’s been quite an experience to follow how audiences react to the short online. “You know, after months of looking at a film frame-by-frame, you forget that it’s funny and surprising and moving, and hearing all of those reactions in an audience has been so rewarding,” says LaBracio. “Since TED-Ed’s core online audience is made up of teachers and students, we’re also delighted to hear feedback from our educator community that the film is being used in the classroom to start challenging conversations, and we have also received a lot of requests to screen the film at various gun violence awareness events.” 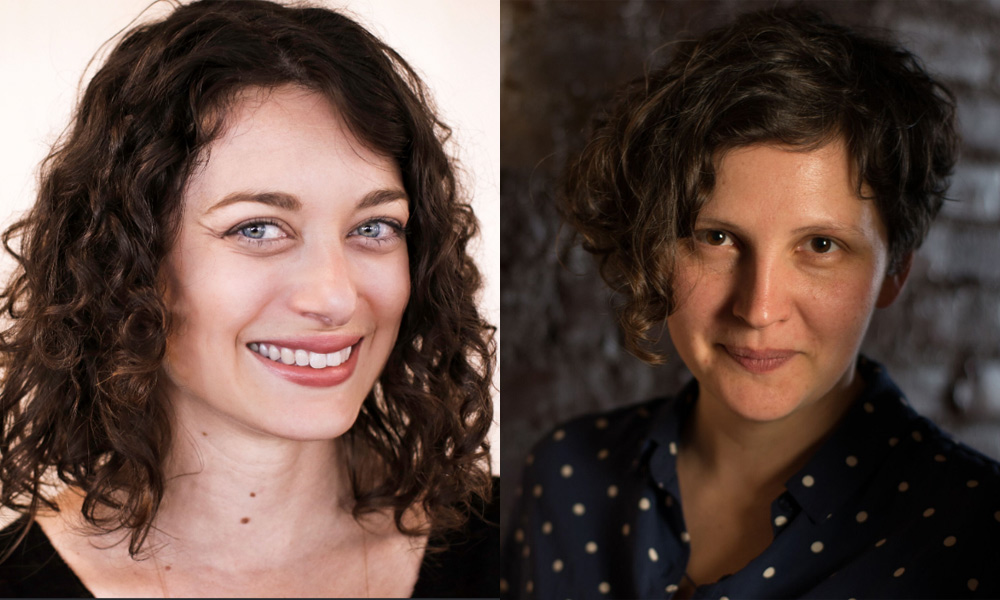 Inside a Special Mind

Floor Adams’ Mind My Mind is another example of an animator using a deceptively simple animation style to tackle a complex issue. Adams, who teaches animation to young people with autism, wanted to depict the daily difficulties of social interactions for autistic individuals. She remembers how one of her students knew everything about the Tokyo metro system, so she asked him how he stored all the information, and why? “He said he just finds it interesting and therefore then remembers it, even though he is not able to organize his day or do his homework,” Adams notes. “That made me think: What does that look like from the inside? How does such a brain work?”

Around the same time, Adams had a short-lived relationship with someone with autism. “Until that diagnosis came, I never suspected it,” she recalls. “That was a strange sensation: working with people with autism but not recognizing it outside that context. That there is such a hidden world in someone. For many, autism is very elusive and cryptic. And in many cases also invisible, or masked. But the daily struggle is great and therefore important to be aware of. Animation is a wonderful medium to visualize this.”

Adams first thought about the idea for her short about 10 years ago. She prepared by doing many months of research, during which she sent former students questionnaires, read many books and scientific articles, and had conversations with autism experts. She received her first grant in 2013 and worked on the project on her own for about a year and a half. But because of the short’s length, she needed more financial support, and that’s when producer Willem Thijssen (Father and Daughter) from CinéTé came on board. Eventually, the short grew to almost 30 minutes and it became a Dutch-Belgian co-production when producer Tom Van Gestel (Fabrique Fantastique) joined the team.

The short, which was made with a budget of around 290,000 euros ($310,000) took about six years to complete. “We were able to produce it thanks to the help of many volunteers in the paint department and friendly professionals who assisted for a minimal fee,” says Adams. “A total of 59 people were involved in the production — not full time, though; some of them for a couple of years, others for a small part of the production.”

For the filmmaker, creating the look for the film was one of the biggest challenges, because it required building a complete, new logic. “I first mapped out in words and on notes what the most important characteristics of autism are, how this process works internally and what the obstacles are,” she notes. “This went hand in hand with writing the screenplay, because the dramaturgy also had to feel right.

Adams is very pleased that the short has generated positive reactions from autistic people, who feel represented by the film and see it as an opportunity to finally be able to show their loved ones what the world looks like for them. “Conversely, almost everyone knows an autistic person, and the film offers insight into their internal world,” she adds. “But even though it is inspired by the experiences of autistic people, it has become a very universal story about social discomfort, daily struggle and being or feeling different. It appears to be very recognizable for many people, and I notice that it makes conversations about these fears and difficulties easier and connects people to each other.”

Just like LaBracio and Samo, Adams is a firm believer of the myriad possibilities of the format. “Short films give room for alternative storytelling, more possibilities for experimentation and technology, and visual non-narrative feasts,” she says. “It can be narrative, abstract, poetic, fragmentary, trippy, a snapshot or a summary … there are thousands of possibilities. In the case of short animation, I think visual art and film can really meet, more than in a feature. By playing with style, image, rhythm, music, you can push the boundaries a bit more. The short film is a genre in itself and, in my view, not a stepping stone to a feature, but a completely different form of filmmaking.” 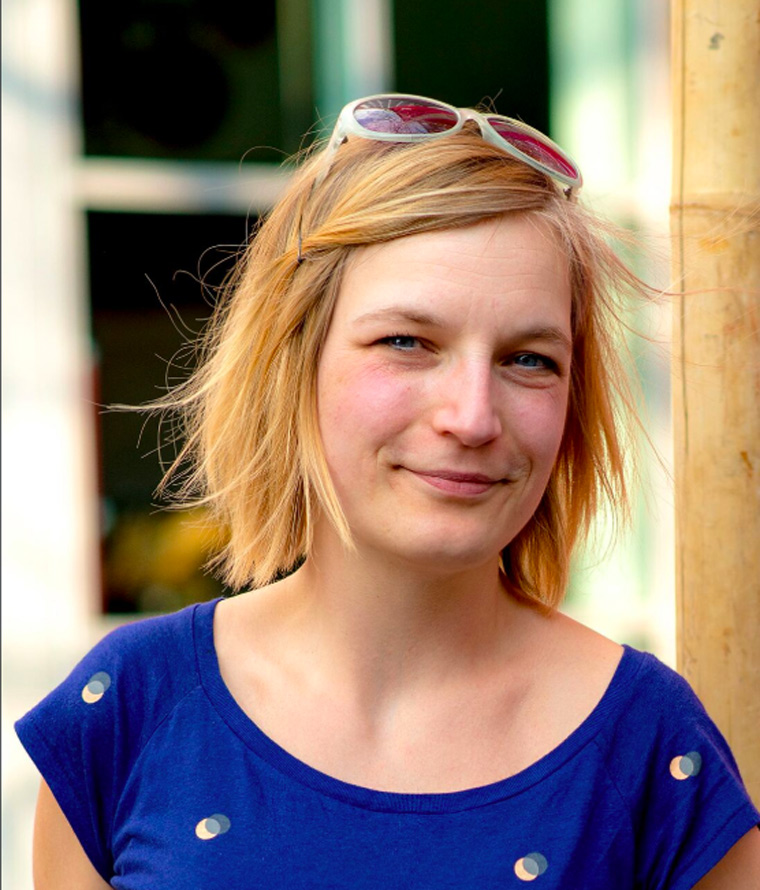 Mind My Mind – Official Trailer from CinéTé Filmproduktie on Vimeo.