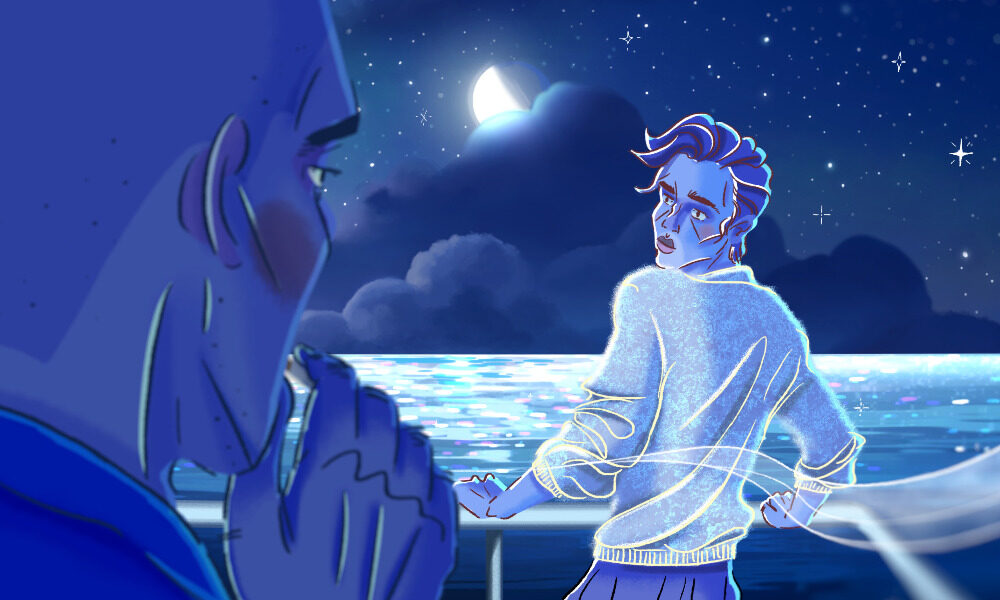 Animation studio Psyop is celebrating a prestigious launch for its second original short film this year, with the news that Christopher at Sea will hold its world premiere at the Venice International Film Festival (August 31-September 10). Coproduced by Psyop, Temple Carrington & Brown and Miyu, the film is directed by award winning director Tom C J Brown and will compete in the Orizzonti Short Films Competition.

The film follows Christopher (voiced by James Potter) as he embarks on a transatlantic voyage as a passenger on a cargo ship. A chance encounter with Third Engineer Valentin (Andrew Isar) under moonlight waylays his hopes of finding out what lures so many men to sea and sets him on a journey into solitude, fantasy and obsession.

“Christopher at Sea is a queer operatic thriller set to the emotive music of Schubert’s 1823 song cycle ‘Die schöne Müllerin’ alongside contemporary music from Casey Spooner, Walt Disco and the film’s composers Brian McOmber and Judith Berkson,” commented Brown. “Twenty minutes of sumptuous hand-drawn animation awaits the viewer, the combination of thousands of hours, years of love, and an incredible team of artists and collaborators bringing Christopher to life on open waters.”

Psyop producer Amanda Miller noted, “Tom is a singular filmmaker. Christopher at Sea is a vision that could have only come from him and every frame is a piece of art. I am honored to have been part of the team that brought this project to life as part of Psyop’s ongoing investment in creatively led original projects.”

Christopher at Sea is the second title of the 2022 short film slate for Psyop Originals, who earlier this year premiered Bottle Cap, directed by Marie Hyon and Marco Spier, at the Clermont-Ferrand International Short Film Festival.

Tom C J Brown is a British Artist and filmmaker, primarily known for his short films t.o.m. (2007), teeth (2015) andCousin John – The Arrival (2020) which collectively won over 50 awards at festivals around the world including Sundance, SXSW, Annecy and AFI Fest. Brown spent the last 10 years in New York working in animation and film, creating commercial content for recognizable brands, and collaborating with local artists Casey Spooner and Rachel Rose. His enthusiastic amateur harping, rambling of English peaks and love of opera all feed into his work as a modern-day romanticist.