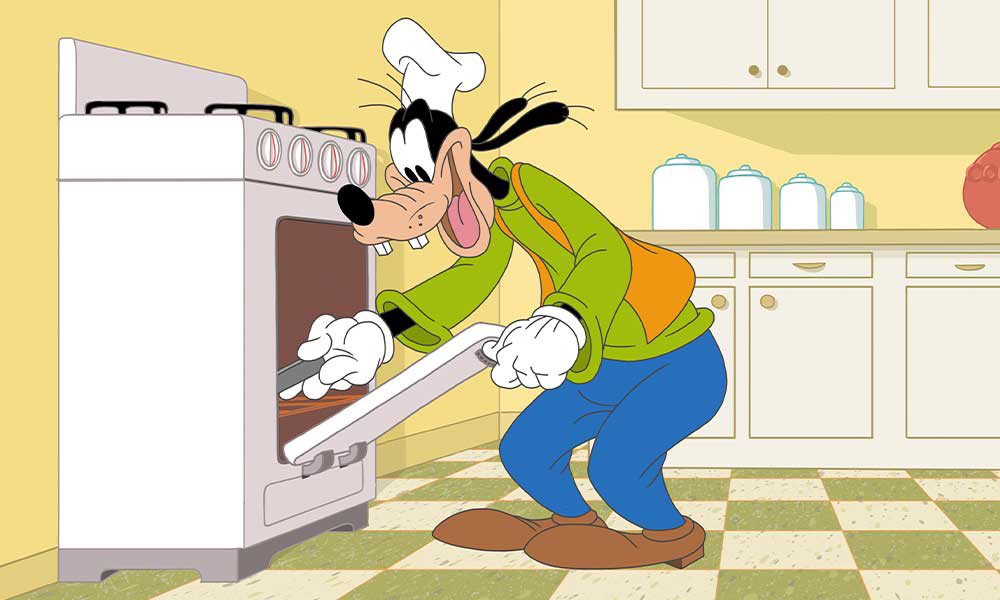 How to Stay at Home

One of Disney’s classic characters gets highly contemporary (and relatable) in a new series of shorts: How to Stay at Home. The comical cartoons starring Goofy are inspired by the lighter day-to-day events of coping with the COVID-19 pandemic over the last year and a half, tackling the topics of “How to Wear a Mask,” “Learning to Cook” and “Binge Watching.” Walt Disney Animation Studios Present Goofy in How to Stay at Home will make its exclusive streaming debut on Disney+ on August 11.

Award-winning Disney animation master Eric Goldberg (co-director, Pocahontas; supervising animator, Moana, The Princess and the Frog) pitched the shorts to Chief Creative Officer Jennifer Lee and President Clark Spencer last fall. “I think Goofy gives us an opportunity to have a little fun with it,” Goldberg told D23. “There are so many stories of people saying they baked bread for the first time or they were learning to cook. And I know personally, I did indulge in binge watching! It affected all of us, but we’ve exaggerated certain things in these shorts; I don’t have as much trouble putting on a mask as Goofy does!”

A team of 10 people worked from home over nine months to deliver the shorts, with tech director Brandon Bloch literally hand-delivering scenes from house to house. Goldberg noted that the team took inspiration from Jack Kinney’s classic 1940s “How To” cartoons.

Disney Legend Bill Farmer stars as Goofy — the character he has voiced since 1987 — and each short is narrated by prolific voice actor Corey Burton (Atlantis: The Lost Empire, Return to Neverland, DuckTales 2017). Goldberg directed all three shorts and was animation supervisor for “How to Wear a Mask,” with fellow Disney Animation vets Mark Henn and Randy Haycock as supes on “Binge Watching” and “Learning to Cook,” respectively. Emmy winner Dorothy McKim (Prep & Landing, Meet the Robinsons, Get A Horse!) is the project’s producer.