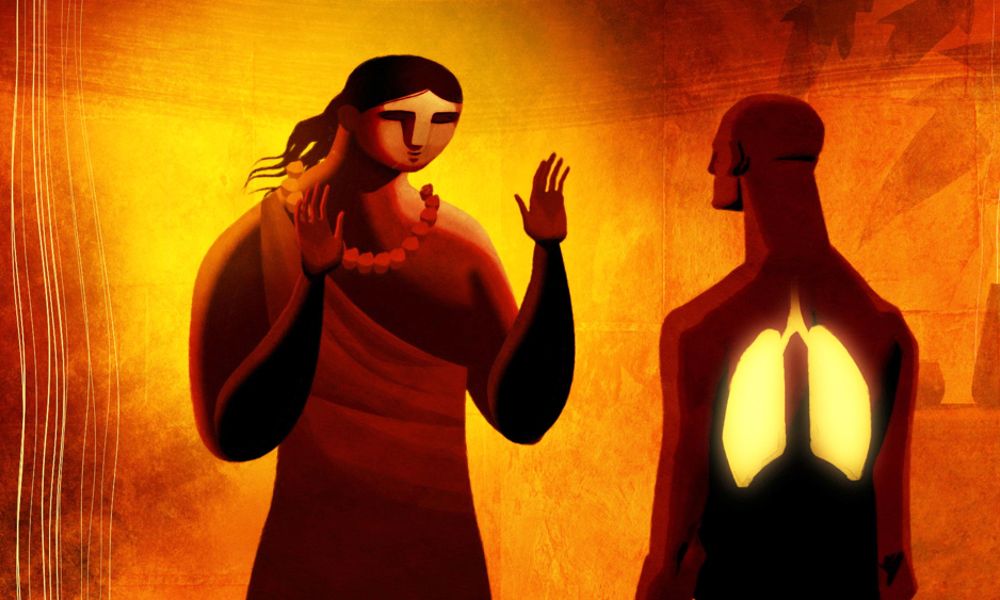 About 10 years ago, the producer/directors of the prize-winning animated short Kapaemahu Joe Wilson and Dean Hamer were working with Hinaleimoana Wong-Kalu on a documentary about her work as a teacher in Waikiki. That’s when she started chanting in the direction of some large stones on the beach, and told them about the origins of the sacred site. The filmmakers knew right then that they needed to go back to this intriguing subject again.

As Wilson explains, “As we continued to work with Hina on projects across the Pacific, we realized that she was not only a great film subject but a skilled storyteller in her own right. So when she decided to come over to our side of the lens as the lead director and producer on Kapaemahu, we were thrilled.” 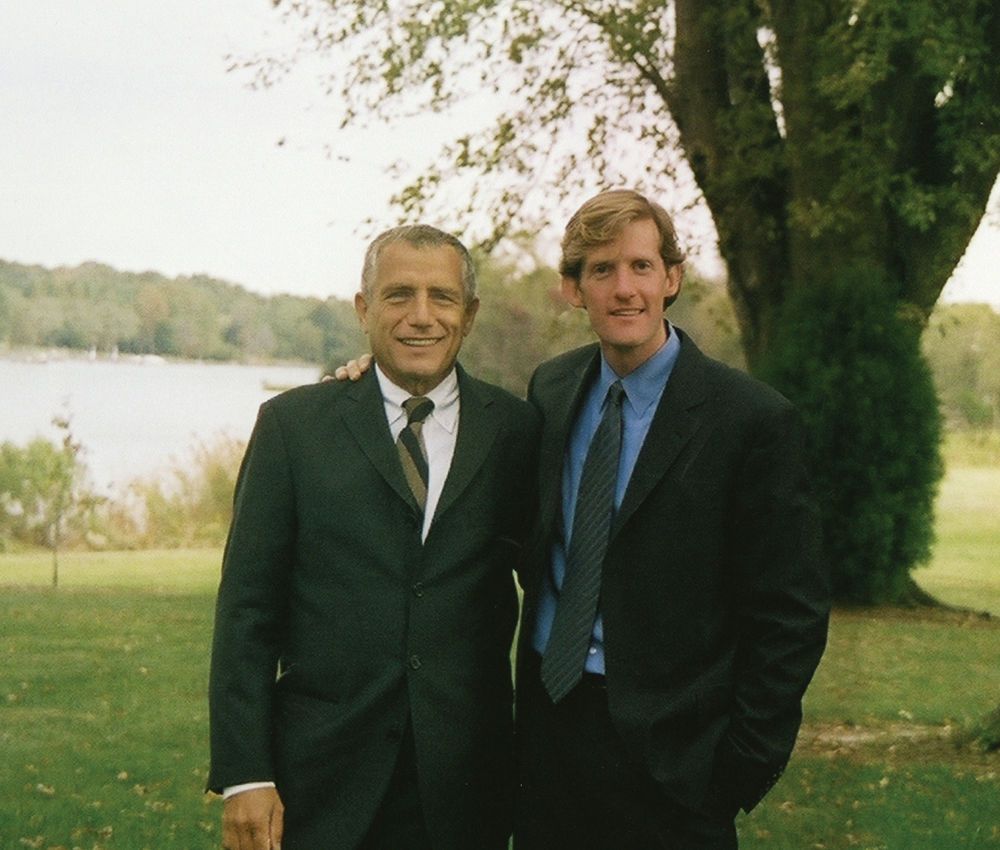 Wong-Kalu has known about the stones of Kapaemahu since she was a young boy named Colin playing on the beach in Waikiki. She tells us, “It was only when I transitioned to become Hinaleimoana, and began to immerse myself in Hawaiian culture and language, that I realized how they relate to me personally, and at the same time embody a beautiful part of our Hawaiian culture that most people know nothing about. Such stories are rarely told, and when they are, it’s usually by outsiders who impose their lens of the world, their language and culture, to synthesize and process the narrative through their own experience. I wanted to tell the story from my perspective as a native mahu wahine and to tell it in the language that my ancestors might have used to pass it on.” 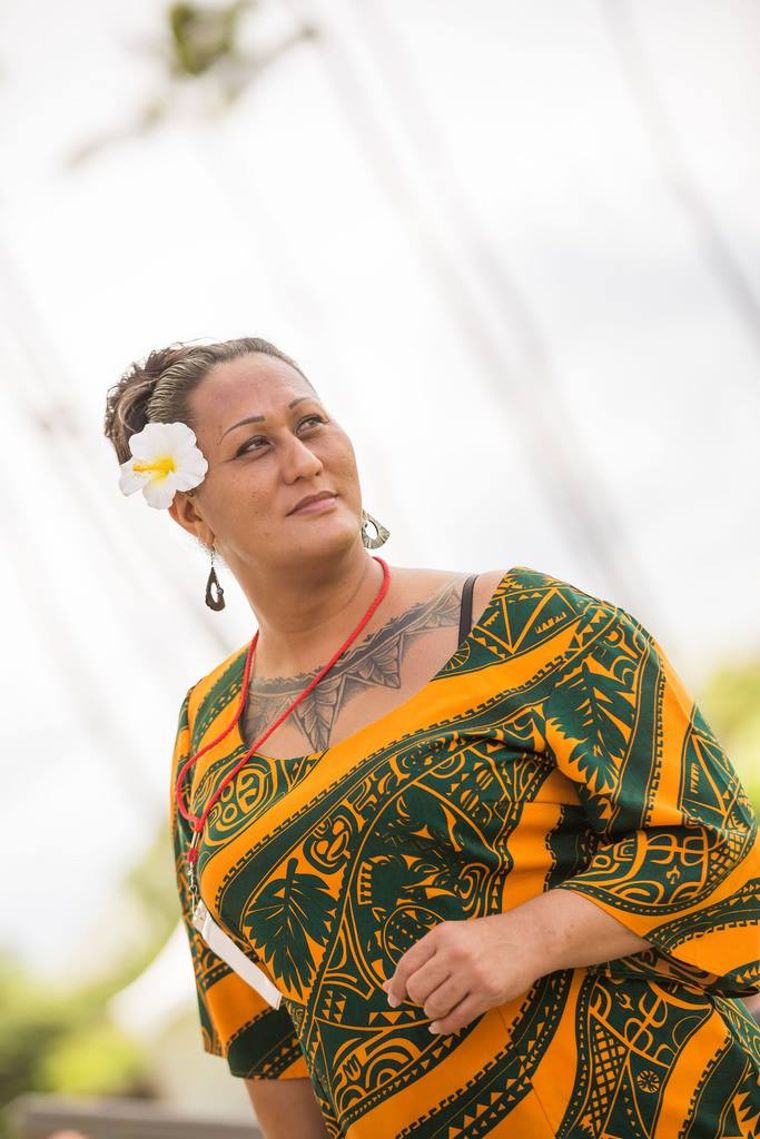 The result of their collaboration is a beautifully animated short which explains the origins of the four mysterious stones on Waikiki Beach and the legendary dual male and female spirits within them. The project, which premiered at Annecy last year and has gone on to win numerous festival awards, is one of the contenders of this year’s Academy Award and Annies races.

Hamer recalls, “We were inspired by the beauty and grace of Hawaiian culture, which in many ways is more sophisticated than anything westerners have come up with. As America went through its ‘transgender tipping point,’ finally recognizing that not everyone fits neatly into the gender binary, it was amazing to be working on a narrative about a society that recognized, respected and admired gender fluidity over a thousand years ago. When the debate over monuments that honor racist and imperialist figures from our ignoble past roiled the nation, we were delighted to be making a film focused on lifting up a site dedicated to some of history’s heroes. And now with the COVID pandemic, the holistic, multifactorial approach of Hawaiians to health and wellbeing is coming to the fore.” 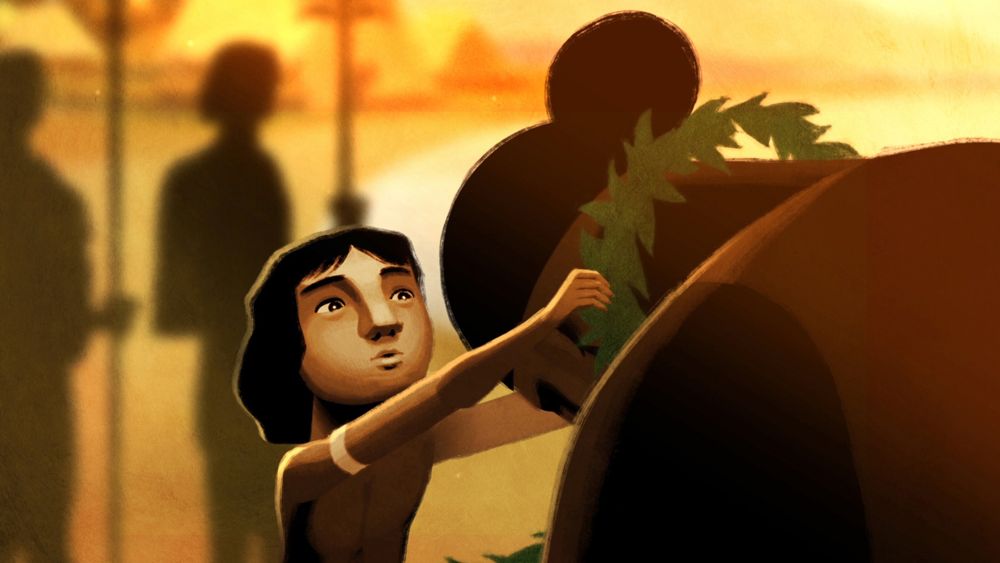 Wilson says the short’s subject matter and meaning called the filmmakers to see beyond just what’s on the surface in front of them. “There was a lot of effort to peel away the layers, to uncover what had been intentionally suppressed and hidden for so long,” he notes. “We spent over five years doing research on the history of the moolelo, talking with elders, digging in library archives, before even starting the script. The breakthrough was the discovery of the original handwritten manuscript of the story which had been recorded over a century ago by a member of the Hawaiian noble class who may have heard it from Queen Liliuokalani, the revered reigning monarch at the time of the overthrow of the Hawaiian Kingdom.”

The short’s Oscar-nominated animation director Daniel Sousa (Feral) seized the opportunity to create a very lush and beautiful world based on traditional Hawaiian and Polynesian art patterns. He says, “I found inspiration for the animation’s rough textures in Hawaiian tapa cloth and even the stones themselves. Dean, Joe, and Hina provided a wealth of photographic references, and we tried to infuse every part of the film’s landscape with that stone texture and richness as well.” 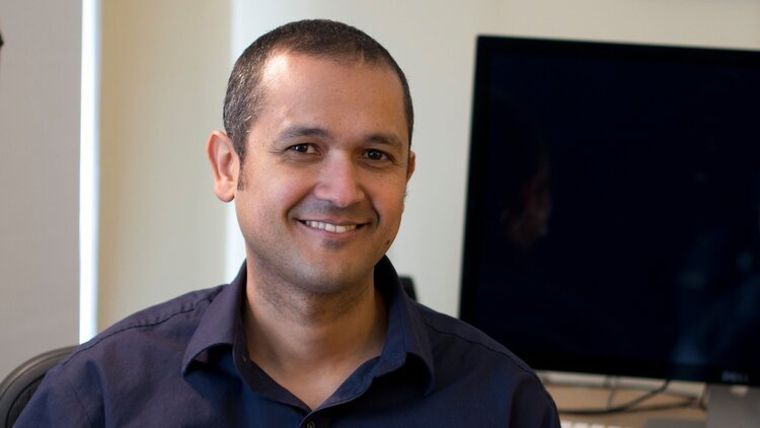 Altogether, it took the team six years of research, two years of concept and script development, one year of fundraising, and one year of production. Wong-Kalu, Hamer and Wilson directed and produced the film from Hawaii, while Sousa animated full time for eight months in Rhode Island to create every single frame. Dan Golden, a long-time colleague of Sousa’s, worked on the sound and music in Massachusetts; and Kaumakaiwa Kanaka’ole wrote and recorded the ceremonial chant in Honolulu.

Sousa explains that for character development, the main concern was to present the mahu (a traditional term for people who exhibit both masculine and feminine traits) as the dignified, statuesque healers they are, for which Wong-Kalu graciously offered to model. “Their large size is meant not so much as a physical representation, but as a symbol of their large spirits,” he adds. 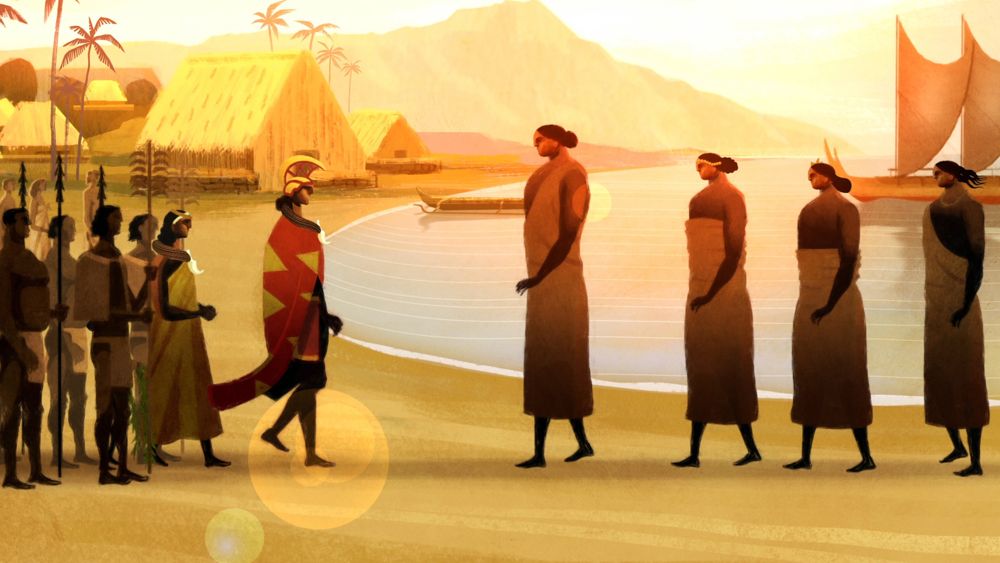 To produce the animation, Sousa and his team used Adobe Animate, Photoshop, After Effects and Blender to generate the 2D animation. “In terms of process, we started with Hina’s script, and from there I created a storyboard and an animatic, while simultaneously generating character and background designs, as well as style frames for each critical moment in the story,” says the animation director. “This combination of animatic and style frames became our template for shaping the film. The directors were involved from start to finish and offered notes and references along the way by regular video conferences.”

For Sousa, the biggest challenge was the joint effort of trying to create a story that connects with the audience on a human level. “The original manuscript is very straight forward, and as Dean mentioned we wanted to stick by it rather than embellish or revise,” he recalls. “Our innovation was to tell the story through the eyes of a curious child, a witness to history across the ages who gives viewers someone to relate to as the journey unfolds.” 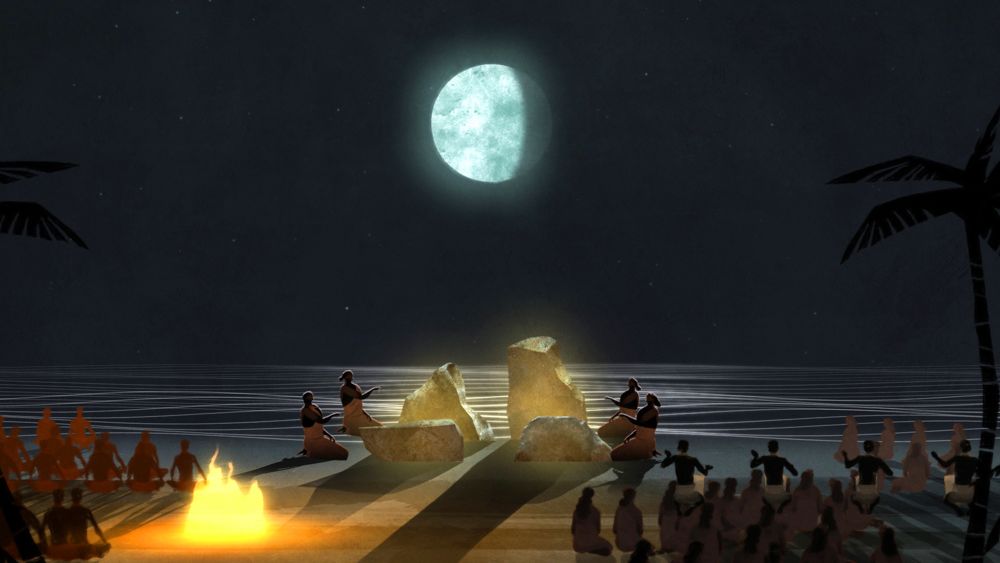 According to Hamer, one of the big challenges was that many modern interpreters had altered the story to try and minimize the role of gender diversity.  One well-known tourism promoter even made the bizarre claim that the name Kapaemahu – which literally means “the row of mahu,” – should be interpreted as “non-homosexual.” “Given that sort of manipulation and censorship, we felt it was important to stick to the documented version of the story passed down through the generations, before the arrival of foreigners in the islands,” he notes.

Hamer says the team was very pleased to receive funding from Pacific Islanders in Communications, a member of the National Multicultural Alliance supported by the Corporation for Public Broadcasting, for a documentary about the stones and their history. He notes, “PIC immediately recognized Kapaemahu as a moolelo – a Hawaiian term for stories that blur the conventional boundary between myth and history, narrative and documentary, fiction and nonfiction – and agreed that animation was an ideal way to express it.” 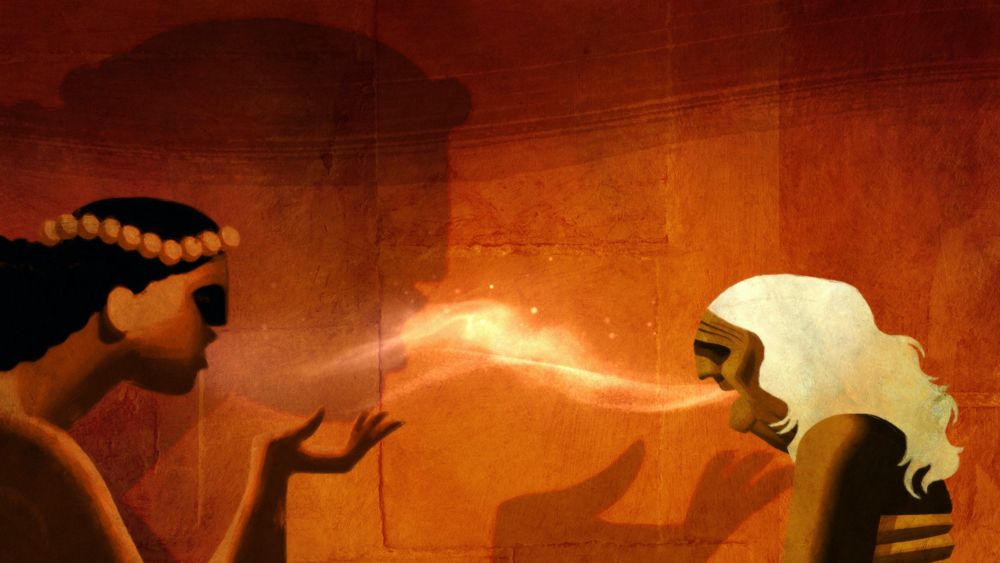 The filmmakers have been thrilled with the reception the short has received worldwide. Says Wilson, “One thing we didn’t expect is the way that the film has been embraced by youth. People usually think of healing and gender diversity as adult topics, but as it turns out, kids love the idea of ‘magic stones,’ and think it’s totally natural for someone to be in the middle between male and female. We’re grateful to have been included in many children’s film festivals, and even to have won a few awards from youth juries. But maybe the greatest reaction was the message we recently received on Facebook from a local viewer: ‘I keep wondering who I’d have been if I’d seen it as a soft little boy at Kailua Elementary. I’m so excited for the kids who get to see it now.’”