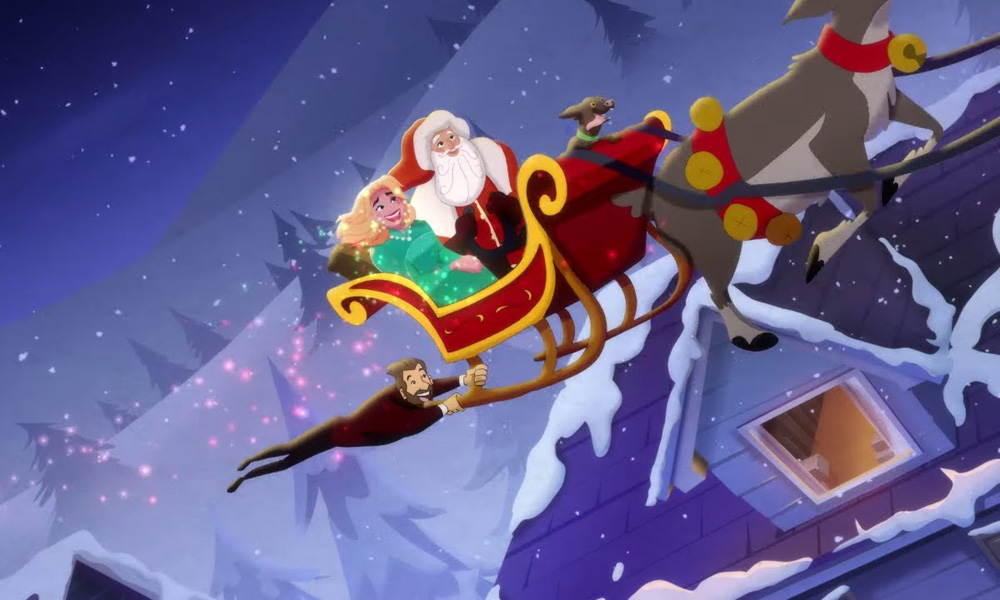 “The goal was to create a nostalgic, old-fashioned-style, animated cartoon. It felt like a natural fit for the song because it also gives a nod to a ’60s holiday music vibe,” said Martin. “The story of the video came from Kelly, and she was very influential in how it was told. All of the people in this hectic holiday house are trying to find connection, and there are laughs along the way.”

The video was created with hand-drawn animation using Toon Boom Harmony — Ingenuity Studios’ first fully 2D project — and was supported by Unreal Engine, used for the foundation of the house, and After Effects to achieve just the right look and feel by adding glows, sparkles and an ethereal quality to scenes. Puppetry was used to show realistic human movement and perspectives, with hand-drawn details woven in to bring warmth and energy to the characters.

The 4’14” video took six weeks from storyboard to delivery, accomplished by a team of seven animators.

“I love working with Ingenuity Studios because I know they’ll deliver what I need, and I know it’s going to be great. These kinds of projects have challenges and hurdles — yet the Ingenuity Studios team always perseveres. Dave Lebensfeld is super hands on, and his team takes his lead,” the director continued. “We had a really tight schedule, and had to create the animatic with the storyboards, then hand everything off to animators. So, the animators had a lot of freedom but not a lot of time for revisions. That actually made it fun because it had to happen so fast. Ingenuity’s animation supervisor, Vinod Krishnan, and his squad were so great. They nailed all the little beats.”

Martin and Ingenuity Studios have previously collaborated on videos for Tiësto and Dzeko with Preme and Post Malone, as well as for Shawn Mendes and others.

“Since we work across film, TV, advertising and music videos, we know what tools work best for a given project. We did that for ‘Under The Mistletoe’ by using 3D software Unreal Engine to give the house perspective from all angles quickly. Our background artists then added life and personality to it. So, Unreal eliminated the need for background artists to have to figure out all of the perspectives. They had the freedom to just draw which is really fun for an artist,” Ingenuity Studios Owner, Exec Producer & VFX Supervisor Lebensfeld added. “Our team fired on all cylinders with this project, and we had a great time working on it. I have to add, we could not have executed this without Vinod Krishnan, our talented animation supervisor. He brought a lot of heart to this project while he kept the animators on track.”

Available now via Atlantic Records, the future Christmas classic co-written by Clarkson and produced by longtime collaborator Jesse Shatkin (Sia, Jennifer Lopez), depicts a budding holiday romance with a throwback melody sure to bring people together this holiday season. Since release, the track has generated over 22 million global streams and climbed into the Top 10 on both the Hot AC and Holiday radio charts.

Clarkson and Eldredge make their debut live performance of “Under The Mistletoe” on NBC’s Christmas In Rockefeller Center special, followed by a performance on the season finale of The Voice and Friday’s episode of The Tonight Show Starring Jimmy Fallon; audiences can catch another performance and Wednesday, Dec. 16 on The Kelly Clarkson Show. In addition to “Under The Mistletoe,” Clarkson also released a stunning cover of the Vince Vance & The Valiants’ classic “All I Want for Christmas Is You” this holiday season.

“I love writing new Christmas songs that have a classic, throwback vibe. Brett is such an amazing singer and I was so impressed by his classic sound on his Christmas record so it was a perfect match for picking a duet partner for ‘Under The Mistletoe,'” said Clarkson.

Eldredge said, “When Kelly sent me this song I was blown away by the soul and joy that it brought into my life the moment I heard it. I couldn’t wait to go in and sing it, and once I heard our voices together I knew we landed something very special. I think we are going to be singing this song for a very long time and I’m glad I get to do that with one of the best vocalists on this Earth.”

Ingenuity Studios Director of Design + Animation, Alex Popkin, added, “When this project arrived, we were working on one of the holiday music videos we’re doing for Dolly Parton. We are happy to be helping to spread so much holiday cheer this year! We were able to achieve the result that we wanted for ‘Under The Mistletoe,’ with its steep schedule, by leveraging our studio’s strengths, hiring terrific additions to the team like Animation Supervisor Vinod Krishnan, and by blending technology often used in 3D productions along with 2D software. The Ingenuity Studios team always drives for the smartest path to get to the best final result.”

DreamWorks Short ‘To: Gerard’ Debuts on Peacock Dec. 17
Tech Reviews: Getting Immersive with the Insta360 Titan and Mistika VR