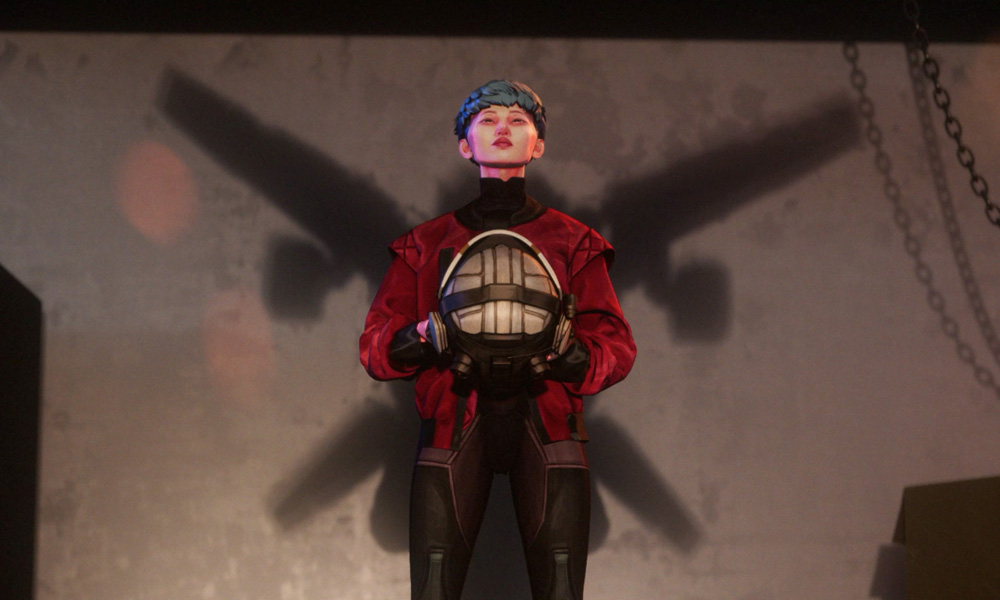 Last month, fans of the free-to-play battle royale Apex Legends were treated to an animated extension of the game’s richly constructed world in Stories from the Outlands – Northstar. Working with the developer and publisher of the hit title, the dedicated artists, storytellers and technologists of Oscar, BAFTA and VES Award-winning studio Digital Domain exploring the origins of the smuggler Valkyrie.

“EA and Respawn were great partners in this project. They had a lot of trust in us and were very receptive to our ideas. It was great to work with the teams that created this deeper universe and fun to do a deep dive into all the lore surrounding the characters. We all knew that fans were going to lose their minds when they put it all together,” said Kevin Lau, Executive Creative Director, Digital Domain.

Taking a distinct stylistic approach from the game’s graphics, the team drew inspiration from anime masters Hayao Miyazaki, Satoshi Kon and Katsuhiro Otomo, as well as more recent works by manga artists Hajime Isayama (Attack on Titan), Natsuki Takaya (Fruits Basket) and director Sayo Yamamoto (Michiko & Hatchin). While the Apex Legends team across EA and Respawn already had a rich backstory developed for Valkyrie, it was up to Digital Domain to deliver that story to fans with emotion, excitement and beautifully crafted visuals.

Read on to learn how Northstar came together in our Q&A with Lau.

(You can watch the short below or on the Apex Legends YouTube channel.)

Animag: Can you tell us a little bit about the origins of the short film’s concept and how early the Digital Domain team became involved?

Kevin Lau: Digital Domain was engaged early in the creative process for this film. EA creative director Neel Upadhye wrote an amazing story that introduced the world to Valkyrie, the newest playable character in the Apex Legends universe. One of the most intriguing aspects of this film was that it was to be told through a series of flashbacks. We see Valk as a child and learn a bit of her backstory, including that she is the daughter of Viper, one of Titanfall 2’s revered characters. Building on the story of the previous game was a big deal for fans.

How about a quick catch-up for those new to Apex Legends?

Valkyrie is the daughter of Viper, a renowned titan pilot from the Titanfall series and one of Titanfall 2’s antagonists. Valkyrie’s father disappeared while on a mission under the command of the character Blisk, and Valk always blamed him for the disappearance of her father. This story shows Valk discovering the wreckage of the Northstar while on a mission for Blisk, in her mind confirming her suspicions. As she confronts Blisk and decides whether or not to enact revenge, we see her choose her own path and cement her place in the Apex Legends roster.

Did pandemic restrictions have an impact on the production?

Our studio has been up and running with WFH practices pretty much from the beginning of the pandemic, but that’s not to say that coordinating all the story development and production practices was easy. We are constantly having to reconsider, and in some instances, reinvent how we do things. The pandemic has created countless challenges on every project, and the scale and complexity of Northstar is no exception. The good news is, Digital Domain is exceptionally well versed in overcoming complex production challenges. For this project, the biggest issues were the motion-capture session and editorial.

For the performance capture, we used Digital Domain’s motion-capture volume in Playa Vista to get our base animation of the story. These performances were then refined by our animators and adapted to fit the anime style. The challenges came about in the prep and actual shoot days. We were still early on in the pandemic and had to limit the number of people on set to make the shoot as safe as possible. EA and Respawn viewed performances remotely while collaborating with us via video conference line. They were able to see all of our camera feeds live and had access to our director and talent in the studio, so they had a presence on every take, even if they weren’t there physically. It was definitely a new process for the whole team, but everyone was so awesome and collaborative. It really reaffirmed that remote production is possible.

Editorial was also something that we had to adapt to by using a remote workflow. Working with an editor is such an iterative and collaborative process, so not being in the same room really creates a layer of obstruction, or at least a significant delay. We were, however, able to use several collaborative tools to our advantage and still maintain “live” virtual edit sessions. These sessions were streamed, and milestones were then posted and reviewed to get an accurate feel, and make sure every cut was perfect. We were able to get into a groove after a while and maintain a real-time, collaborative vibe during the process.

How did Northstar differ from Digital Domain’s prior experience with videogame projects?

Digital Domain has a deep history with game trailers and cinematics. We really love working on these longer-form pieces. They really allow us to flex our production chops, and give us the time to really get into the storytelling aspect of things. Each trailer has its own special focus, but Northstar was stylistically stunning. We were able to develop an amazing look and feel that fit within the Apex universe, but had its own unique flavor that took inspiration from many forms of art.

The great thing about the Apex franchise is that it focuses heavily on world building and creating rich stories and characters. With a runtime of a little over eight minutes, the film was not only packed with great action, but also wall-to-wall dialogue, not just a voice over with exposition. I think that was one of the things that the team was most excited about – bringing to life this genuine story with such emotion.

The short’s animation is not only more cinematic, but more stylized than the game — what were your visual inspirations and how did the look come together?

When EA and Respawn reached out to us, they were really looking for a different take on the visual style. They were introducing a character with Asian roots and wanted to make sure that we touched on those traits, including cultural indicators in the look and feel. Director Evan Viera has an amazing eye, and his work is inspired by some of the masters of anime like Hayao Miyazaki and Satoshi Kon. We exaggerated the proportions and physical characteristics of our models, and used painterly backgrounds with a nod to the masters of anime.

What sort of technical tools were used to achieve this?

Our pipeline is built around a traditional VFX workflow. Our main packages are Maya, Houdini and Nuke, and we render in V-Ray. We are also using things like Substance Painter, ZBrush and the Adobe suite. These 3D packages were used in conjunction with 2D matte paintings and traditional cel animation for effects and extra flourishes. We also used a range of proprietary tools created by Digital Domain in-house – including our high-end facial rigs and pipeline that were developed for the use in blockbuster feature films. It allowed us to capture subtleties you won’t find in most animated shorts, even though the facial performance was entirely hand keyframed.

How many people at Digital Domain worked on the project?

This was a fairly large team. When all was said and done we were at around 60 people strong between all the different disciplines. The whole film took the better part of six months.

What inspired the time-jump style storytelling of the short?

The idea was always to slowly reveal Valkyrie’s backstory through a series of flashbacks. We really loved that idea and leaned into it. We designed a series of match cuts and connected story points that helped bridge the two timelines together.

To differentiate the two time periods, each had its own distinctive style – the flashbacks used a subtle palette inspired by Miyazaki, while the present featured saturated colors and high contrast. Creating 3D computer generated imagery that is meant to mimic 2D film-style animation presents a challenge. If it isn’t done well it can be distracting. We also used hand painted backgrounds, textures, toon shading and hand-drawn effects that let us carve out the unique look and feel of this piece.

Bonus question: Do the chickens in the barn flashback have names?

Haha… not that I know of. We always referred to them by the name “chicken.”

What are the special considerations of creating a new type of content for an established property like Apex Legends?

We like to approach each project with the same objectives, which is simply to create the best story that we can. We were very fortunate in this case to be working with such great content and a strong franchise. Apex fans are loyal and really know how all the characters’ stories intersect, and each character’s special talents and skills. We paid attention to all the little details and made sure to be as accurate to all the lore as possible.

What was the biggest challenge of creating Northstar?

One of the biggest challenges was just the scope of the project. Eight minutes of dialogue is a lot to undertake, but the rich story had to hold up. We couldn’t just distract audiences with visually rich action sequences, we had to create a connection between the character and the audiences.

What was the most rewarding part of the project?

To me, the reaction to the final result is always the most rewarding part of these things. The day it goes live we are all glued to the internet waiting to see what the fans think. We live with something for many months and work hard making decisions about silly things, like how someone picks up a gun or what order to make an edit, and when you read comments that pick up on the subtle choices that were made it’s really rewarding to have those details and effort acknowledged.

Have you gotten any stand-out reactions from Apex Legends fans to the short?

Absolutely. The day the film launched I personally spent too much time watching reaction videos. It was amazing to see the hardcore fans start to put the dots together as Valkyrie’s character was unveiled. When it was revealed that Viper is her father, people lost their minds.

Game-inspired animated shorts have become more popular in recent years — in your view, what fuels this trend and does Digital Domain plan to do more of this sort of project?

The game industry has matured, and fans have become invested in the worlds their favorite games create. As the reach and multimedia potential of these games expands through networks like Twitch and YouTube, we are seeing greater opportunities for original content. Animated shorts are a great medium for storytelling and allow people to get to know the characters they have grown to love. Digital Domain loves getting involved in these sorts of projects and looks forward to creating them for years to come.

We have a ton of cool projects in the pipe, we just can’t discuss them yet!