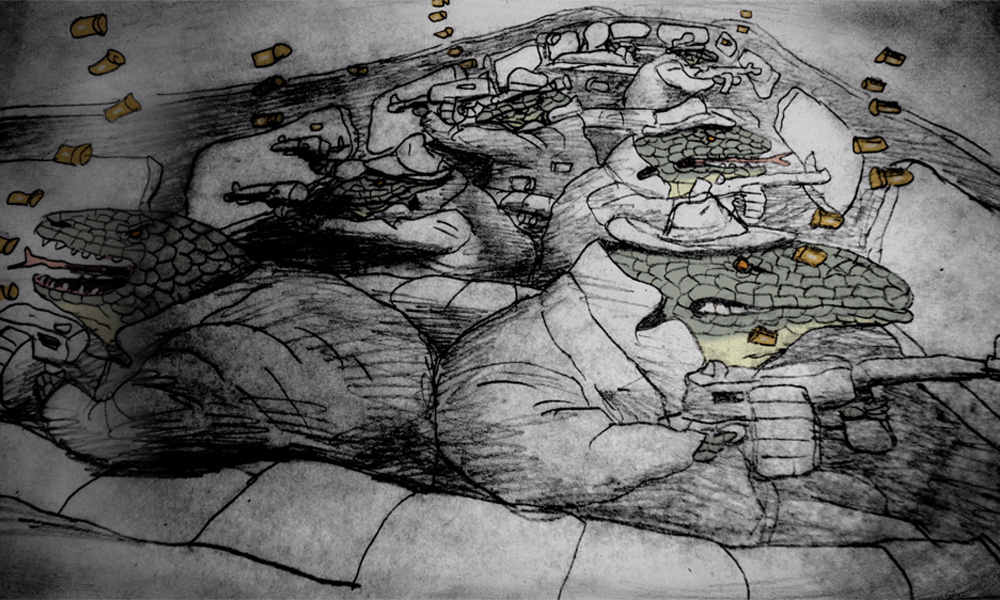 Indie animation maestro Bill Plympton has turned his pencil power to a new music video for Tim Grimm’s haunting political dirge “Gonna Be Great,” off the folk artist’s 2017 album A Stranger in This Time. The tune was written by Grimm and his son Jackson during Donald Trump’s 2016 U.S. Presidential campaign.

“Jackson had the [music] verse progression, and it was darn catchy. I walked back to the cabin with that playing in my head and the state of the country weighing on my shoulders,” said Tim Grimm. “I worked on it a while and added a chorus. Got a fair chunk written in one sitting and walked around for a few days, with notes, and finessing lines. Both Leonard Cohen and Bob Dylan’s spirits rattled around in my brain somewhere…”

Following the lyric narrative, two time Oscar-nominated animator Plympton (Your Face, Guard Dog) created a visual story which follows “a businessman in a business suit” driving cross country, leaving clouds of dust and piles of destruction in his wake. He is accompanied by a gang of mafioso-styled lizard men, inspired by old flicks from the Warner Bros. vaults.

“What I loved about the song ‘Gonna Be Great’ was the texture of Tim’s voice, matched with the deep poetic lyrics that gave the song a mysterious and haunting feeling. I tried to match that emotion with dark film noir visuals that were like an old Warner Brothers gangster movie,” said Plympton.

This isn’t the first time Plympton has aimed his creative energies at the PoTUS. The outspoken animator attracted both praise and criticism for his New York Times webseries Trump Bites last year.

Tim Grimm is a native of the U.S. midwest who has pend years traveling the world as a musician, singer and actor in several national TV series, major motion pictures and on stage. He has released 10 albums to-date; his latest, A Stranger in This Time hitting No. 1 on Folk Radio with “Gonna Be Great.”

Bill Plympton is Portland, OR-born, New York City-based independent animator who has created award-winning shorts and feature films such as Your Face, How to Kiss, 25 Ways to Quit Smoking, The Tune, I Married a Strange Person, Hair High, Mutant Aliens, Guard Dog, Idiots and Angels, The Cow Who Wanted to Be a Hamburger and Cheatin’. His most recent projects are Revengeance, written by Jim Lujan, and his mockumentary Hitler’s Folly.