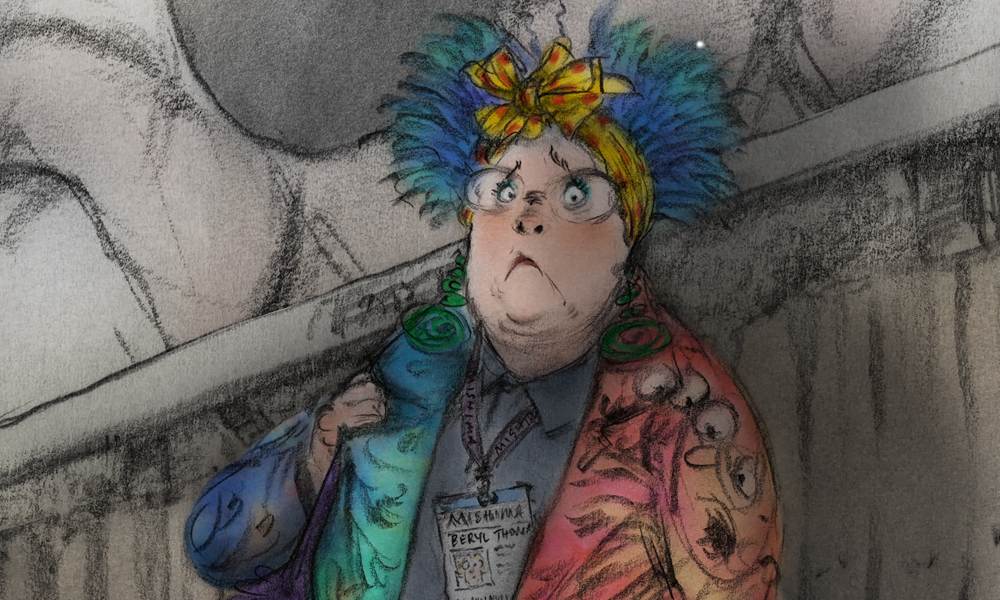 Joanna Quinn and Les Mills’ multi-award-winning Affairs of the Art chronicles the hilarious antics of a middle-aged woman and her eccentric family.

Since its debut at the Clermont-Ferrand International Short Film Festival in January 2021, where it won the Best Animation award, Affairs of the Art has been screened at more than 65 festivals.

A co-production between Beryl Productions International Ltd and the National Film Board of Canada, Affairs of the Art has generated tremendous buzz, resonating with audiences worldwide and picking up 22 other awards, including the Special Jury Distinction for Direction, Short Film, at the Annecy International Animation Film Festival, the Jury Award in the Comedy category at Aspen Shortsfest, the Audience Award at the New York City Short Film Festival, and the Gold Hugo for Best Animated Short Film at the Chicago International Film Festival.

We asked Quinn and Mills to discuss their creative process — including Quinn’s signature hand-drawn animation and Mills’ wildly funny script — and share the inspiration behind their film’s quirky, endearing characters, whose obsessions range from drawing to pet taxidermy. 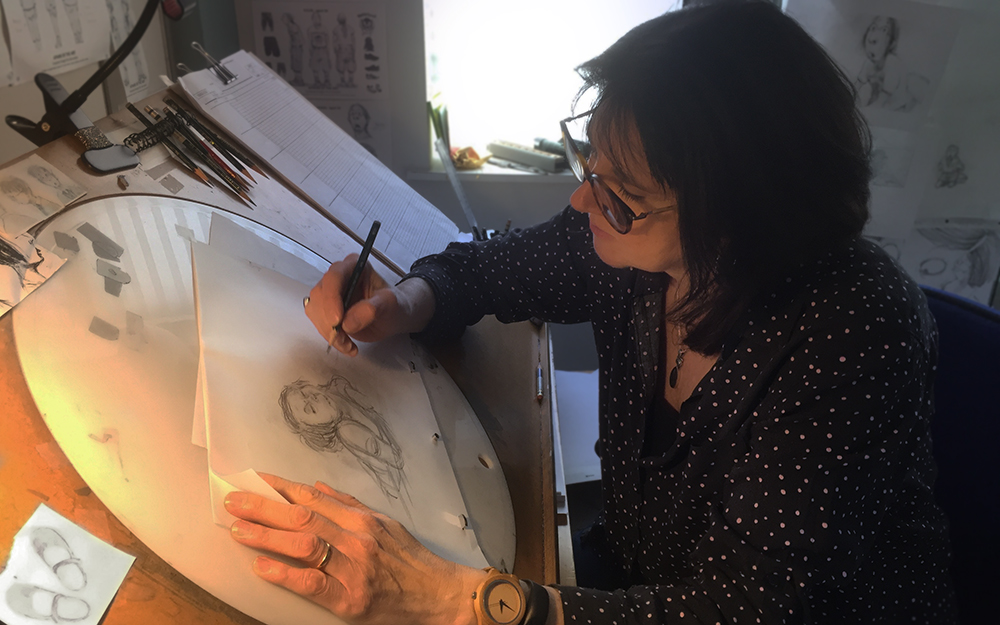 Joanna Quinn: Initially, I wanted the challenge of doing a film digitally that looked like it had been done on paper. So I bought a Cintiq and animated on it for six months, but I was really unhappy. The animation I did was not very fluid. Because there are lots of levels, you end up thinking too technically: “Oh, I don’t need to animate that; I can put that on another layer and hold it.” As a result, you get obsessed with doing that and it detracts from the flow of your animation.

I realized that the beauty of drawing on paper is that you don’t have to make any of those decisions; it’s instinctive and spontaneous. It’s solely the pressure and angle of the pencil, and where to put the line. I found I couldn’t do that using TVPaint. So Les said, “Why don’t you get your light box out again and carry on animating on paper?” At first I was quite reluctant to do this, because I wanted to try and be modern, and it was really difficult to buy any animation paper, because everybody had given up animating on paper — except me and Richard Williams!

So I gave up TVPaint, I got my light box out again, and instantly, I became happy, and my animation became more dynamic; it was a joy. It’s not just the look of the animation, it’s the process of animating. I absolutely love it. I’m never happier than when I’m animating on paper, going on a journey and making mistakes. When you make a line that you weren’t planning to make, it can take you off on another direction, so you’re constantly making discoveries when you’re drawing on paper.

When you’re making a long film, which seems to take forever, it’s all about maintaining the fluidity of the line and the quality of the animation. You want to be happy and relaxed when you’re doing it. And you want it to be a delicious outcome at the end. So, that’s it; I’m not going to animate digitally. 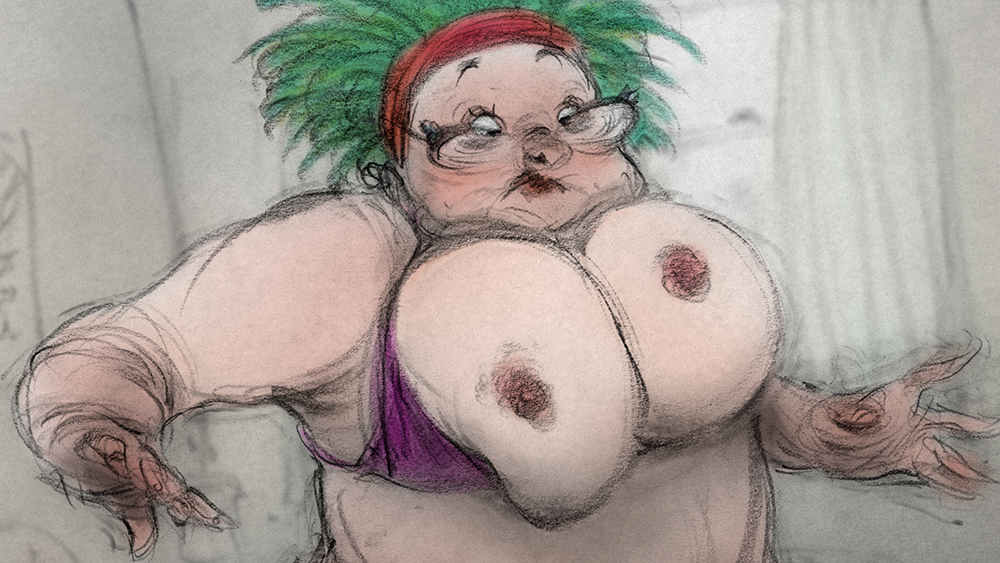 Beryl in her bra. (Affairs of the Art / Beryl Productions International and NFB)

Joanna: This sums up Beryl’s anxious, trying-to-do-something-with-her-life face. That sequence for me was fun to animate, because within it you can see her character changes, and different emotions come across. She’s doing her hair, and her husband Ifor comes in and says something devastating: “You didn’t try this bra on, Beryl? You did, didn’t you?,” and then she loses all confidence and visibly melts.

Les Mills: It’s a very Beryl-esque face. The nuances of the facial expression, it typifies the way she reacts to things, which sums up very succinctly the very Joanna Quinn-like character of Beryl.

Joanna: The things I’ve loved about making this film are moments like that, where you can have fun with the character when it is dominating the frame, and you’re using the face to show emotion. I use a mirror and copy the emotion, and it’s really satisfying to get inside a character. And then there’s lip sync, which is magical when it works and brings the character to life. 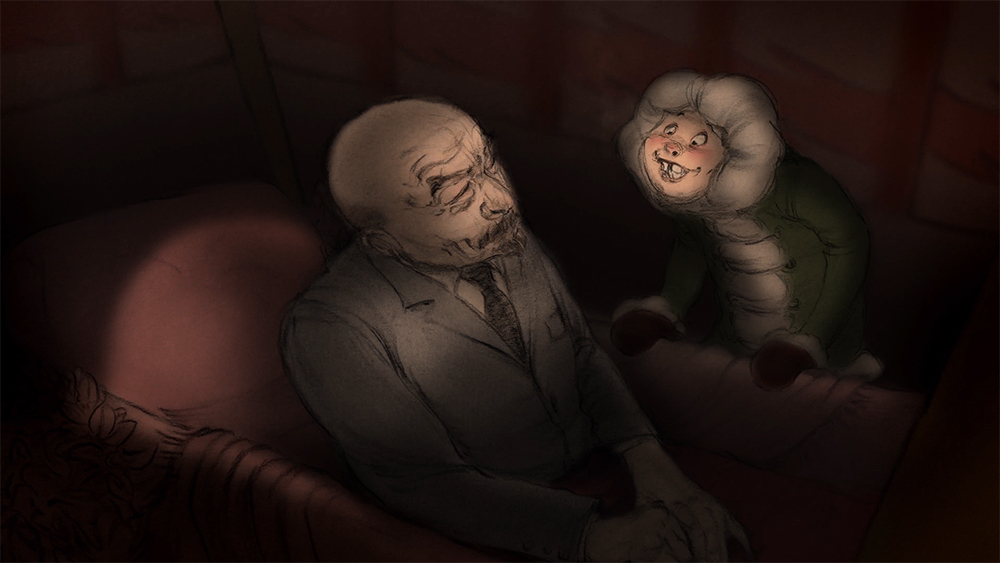 Beverly in Russia, at Lenin’s tomb. (Affairs of the Art / Beryl Productions International and NFB)

Exploring Beryl’s sister Beverly and her obsession with Lenin

Les: There are a few sequences that I love, and one of them is the scene where Beverly dreams she’s in Russia meeting Lenin. I like the build-up and the way the scenes develop. It’s very different to other parts of the film. We went to Moscow to do research and saw Lenin in his tomb, so to see it subsequently on the screen is very personal. I really like the sequence where Beverly sings the International anthem and throws Lenin’s badge away because she’s disgusted that she never got to go to Moscow, only to East Berlin. These scenes are a combination of imagination and the ‘real Beverly,’ who was obsessed with studying and preserving ordinary, familiar dead creatures. I like it where the film goes from everyday ordinariness into dream-like sequences.

Joanna: I loved animating this scene, because I could really exaggerate the change in character and have lots of fun with it. We were very lucky at the time, because there was a girl who spoke Russian who was on work experience with us and she helped me with my lip sync. I made her sing and I filmed her doing it, so I understood her lips. It’s really difficult to do lip sync with foreign words you don’t understand. Then I photocopied my face doing all of the lip movements, put them in sequence and visually just matched my lips to hers. 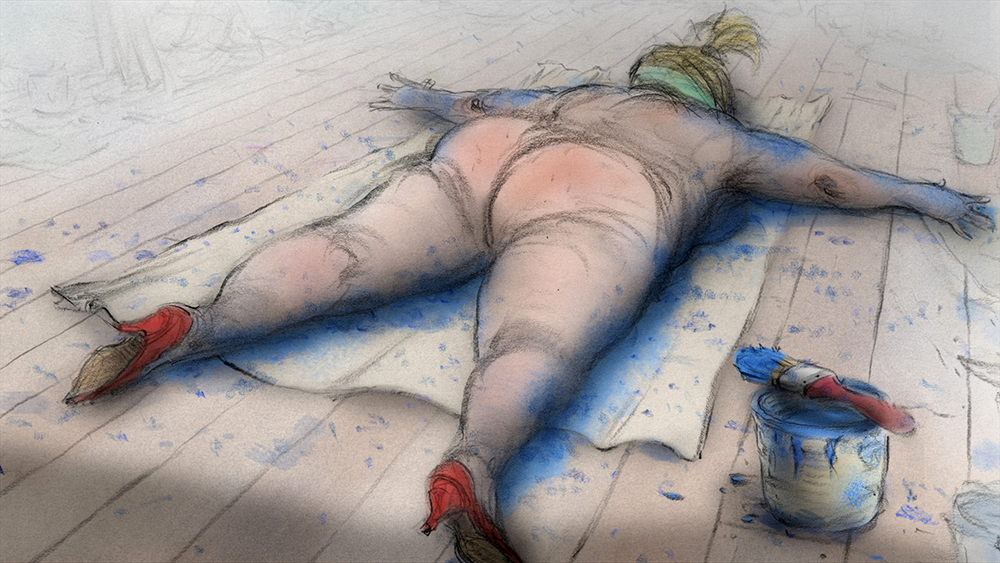 Beryl face-down on her self-portrait. (Affairs of the Art / Beryl Productions International and NFB)

Joanna: Beryl throwing herself face-down on her self-portrait is a typical animation delight, because you can have fun with animation timing. Sometimes when sound and image collide, your audience can’t help but laugh. It’s a natural reaction!

We slowed down the drawings at the top of the dive and then went faster when it hits the ground, to create impact. It’s an animator’s delight to play with speed and create something funny; it’s a fun challenge to make the audience laugh.