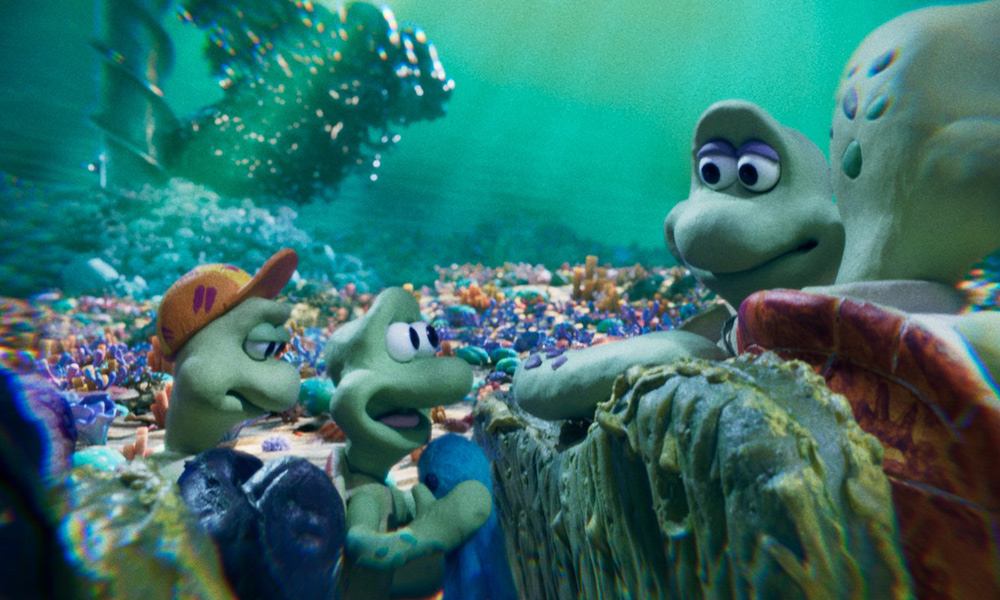 Multi-award-winning animation studio Aardman and environmental organisation, Greenpeace have launched a powerful new animated film, highlighting the plight of the world’s oceans. Turtle Journey, directed by Aardman’s Gavin Strange, tells the heartbreaking story of a turtle family heading home through an ocean that is under increasing pressure from climate change, plastic pollution, oil drilling and overfishing.

Aardman uses its skills in storytelling, humor and creativity to communicate Greenpeace’s urgent message with a mix of CGI and stop-frame animation. Physical puppets were created to portray the turtle family, whilst the underwater environments are detailed in CGI.

“I wanted to tell a personal yet universal story of family, loss and hope to best connect with audiences around the world,” said Strange. “It was an absolute dream to work with such a talented crew of animators, artists and creators here at Aardman, manipulating clay and pixels to make such a nuanced and delicate piece of animation. Brought to life by a stellar cast of world-class voice talent, topped off by a simply sublime score from Arthur Jeffe’s Penguin Cafe, I am immensely proud of what we’ve all made together.”

“We felt that Aardman’s global popularity and distinctive blend of humor and emotion could help us to reach new audiences with a strong but simple message – our oceans are in crisis and we must act now to protect them,” said Will McCallum, Head of Oceans at Greenpeace U.K. “Six out of seven sea turtle species are threatened with extinction. Governments have an opportunity to take bold action at the United Nations this year when they meet to agree on a new Global Ocean Treaty. A strong treaty would pave the way for a global network of fully protected ocean sanctuaries, placing 30% of the world’s oceans off-limits to exploitation by humans and giving marine species such as turtles a chance to recover and thrive.”

“I’m thrilled to have worked on this heartbreaking film with Greenpeace and Aardman – it’s so important. Our oceans face so many threats, some I wasn’t even aware of before this, and sadly the story of this turtle family trying to get home in a damaged and changing ocean is a reality for so many marine creatures that are having their habitats destroyed by human activities. I hope this film inspires more people to take action to protect our oceans.”

“During my lifetime, I’ve seen nature being destroyed on an unimaginable scale by human activity. I’m saddened that our generation will leave to future generations a damaged planet, which has already lost so much of the biodiversity that makes it special. However, we have a chance to do something now and leave a legacy of properly protected oceans to all the people who come after us. We can’t bring back what we’ve already lost, but we can protect what we still have. I hope this film will help to make more people realise the ocean is worth protecting, and inspires us to act before it’s too late.”

“This heartbreaking story of a turtle family trying to get home through an ocean in crisis should resonate with anyone watching it. We all live in a world that has been changed enormously by human activity, and this reality is as true for marine animals like the turtles in Turtle Journey as it is for us humans on land.”

“When I’m older, what will the oceans look like? I want my generation and every future generation to experience healthy, thriving oceans that are full of life and are a safe home for beautiful and important creatures like turtles. But I’m worried this won’t be possible. In my short lifetime, our ocean has already been damaged on a scale many people didn’t think possible when I was born.”

“We need to act, or it will be too late. Future generations will be living out the consequences of what we do, or don’t do, right now. Will governments sit idly by while our oceans are destroyed, or will they leave a legacy of healthy, protected oceans that can be admired by all, now and in the future? The eyes of the world and of all our descendants are on our governments. We, individually, need to play our part but they, collectively, must act now to create positive, lasting and dramatic change. Don’t just listen, do something about it.”