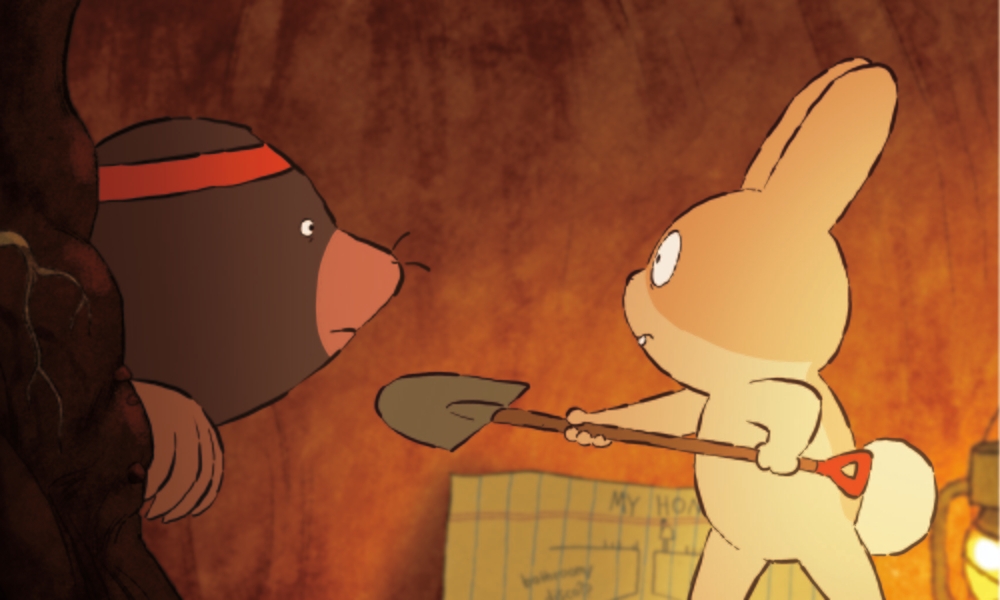 From the early days of Oswald and Bugs, rabbits have always been wonderful subjects for animators. The eighth Pixar SparkShorts film, Burrow introduces us to a wonderful new lagomorph heroine who is trying to dig out the perfect home for herself. The 2D short, which is directed by Coco animator Madeline Sharafian and produced by Mike Capbarat, was expected to run before Pixar’s Soul in theaters — but could debut straight to Disney+ in November.

The CalArts grad attracted a lot of fans with her student short Omelette seven years ago. She tells us that growing up in the Bay Area, she was fascinated by rabbits from a very young age. “’Rabbit’ was actually my childhood name,” Sharafian recalls. “I grew up near a National Park, and I recall seeing cottontail rabbits on the trail heads, poking their heads out. I was also obsessed with cut-aways and Wes Anderson movies. So I wanted to combine all of those things in an animated short. I also felt that digging down and feeling isolated from others worked well as a metaphor.” 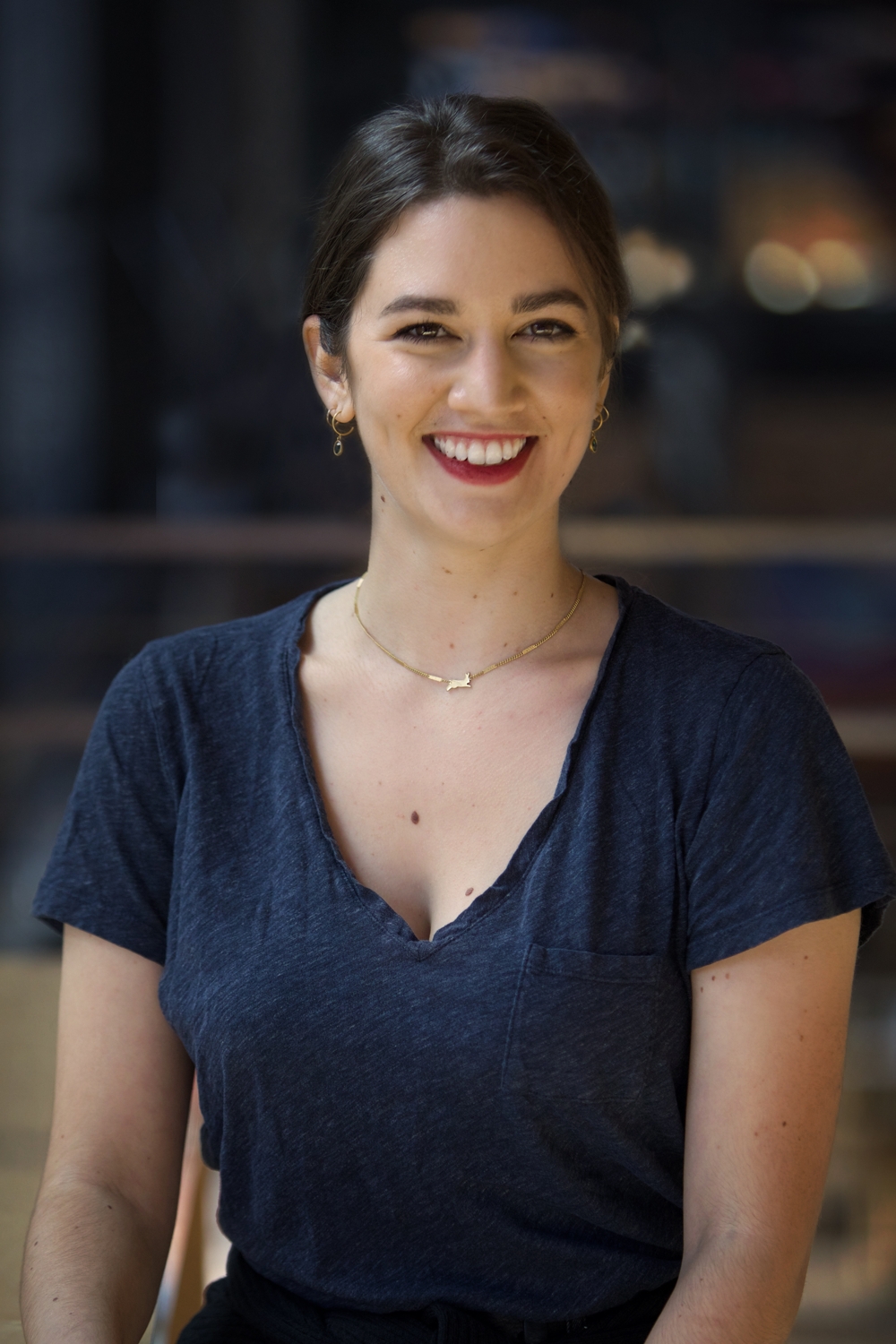 Sharafian, who worked on Cartoon Network’s We Bare Bears before getting hired at Pixar, starting the initial storyboarding phase of her short in November of 2018. “Like all SparkShorts projects, we had six months on Pixar clock time, which is close to a full year of Earth time,” she jokes. “I was grabbing artists at the studio to work on Burrow between their projects. We had close to 34 people on the short. We knew we had to do all the backgrounds in Photoshop, and we wanted a traditional watercolor look. Artist and Illustrator Ana Ramírez González is so talented with textures and brushes, and we tried out different things to achieve the right 2D look.”

The short’s animation was done in TVPaint. “All my student films were done in TVPaint,” says the director. “It needed to be simpler and flatter so that the colors would pop up against those detailed backgrounds to maintain that hand-drawn feeling. We had to do these small lines stitched together, and it all had to be hand-drawn because it was too hard to automate the process.”

Sparked by Spirited Away

Sharafian says the year 2001 was a big turning point for her. That’s when she was in middle school and saw both Miyazaki’s Spirited Away and Pete Docter’s Monsters, Inc. in theaters. “I didn’t realize animated movies could make you feel this amazing,” she recalls. “I felt like a changed person after I saw those movies. That’s when I set my goal to work in animation.”

Citing author-illustrators such as Beatrix Potter (another big rabbit fan) and Richard Scarry as other huge sources of inspiration, Sharafian adds, “Of course, I am also a major Miyazaki fan. I remember there was a scene in My Neighbor Totoro when the two girls were looking at these acorns, and I just loved how shiny those acorns were. Recalling that scene, I kept adding shiny highlights to the ladder in the short!” 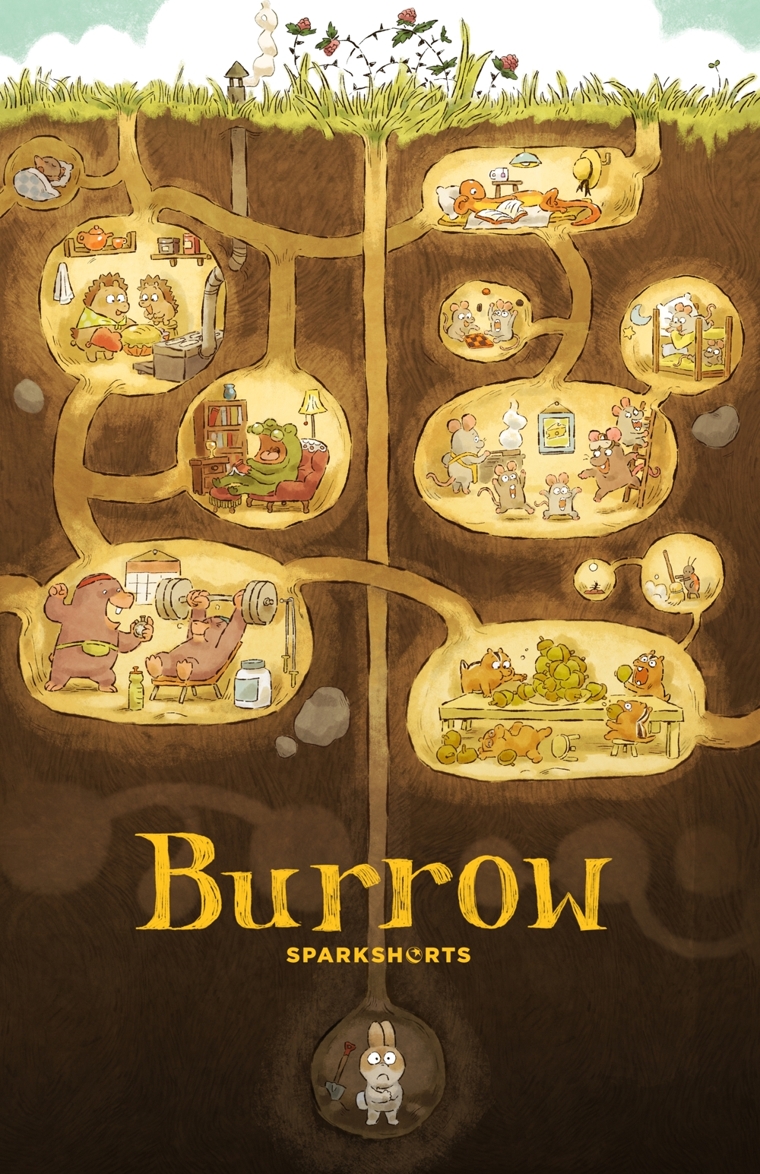 Looking back at her SparkShorts experience, Sharafian says she loves the fact that artists in the program are allowed to work quite independently without much executive oversight. “I kept looking over my shoulder, but they are really behind you no matter what you decide to do,” she says. “The amount of time you have on your project is so short, so you can’t really overthink anything. You just have to commit and move on. Everyone who worked on the project was so excited to work on a 2D-animated project. People were coming out of the woodwork just to do one or two shots. The art team was really excited, because in CG-animated movies you don’t get to see the concept art in its original form on the big screen, but it’s different in 2D projects.”

As Burrow and its hard-working animals are finally making their way out to the world, Sharafian says making short films on her own before Pixar was a great way to build confidence. “I didn’t want to burn the team out, so we tried to find as many shortcuts as we could,” she says. “We needed to be as clever as we possibly could be. But it paid off because we actually found time to add a little button (epilogue) where we see Rabbit in the bathtub. We hadn’t originally planned that, but we moved quickly and the team had extra gas in the tank, so everyone wanted to keep going and push for that extra bit.” So much like a clever, fast-moving rabbit who is working diligently on a trail head.

Burrow will debut alongside Soul on Disney+ on December 25. For more info, visit pixar.com/sparkshorts.