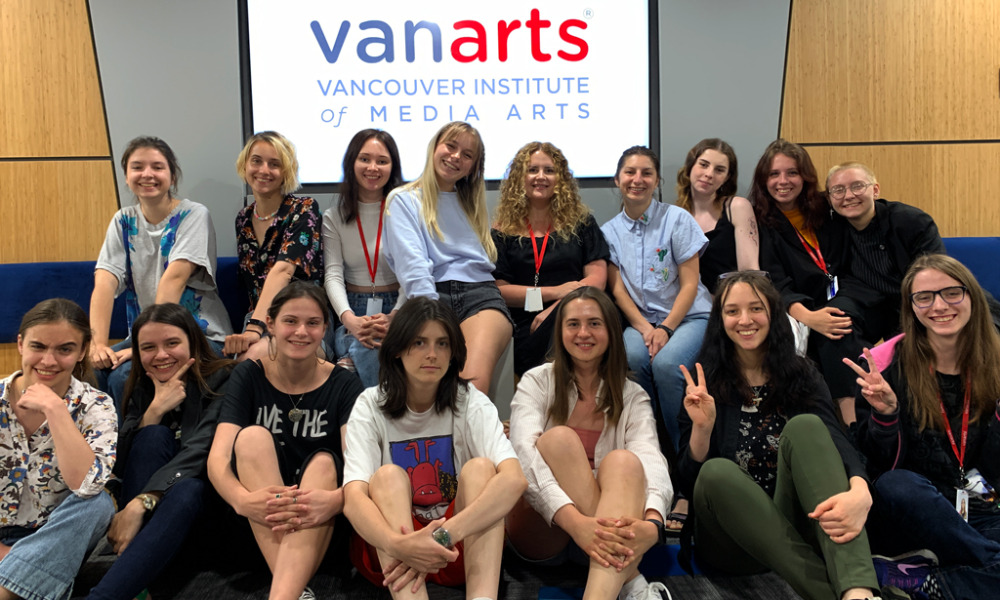 Students from Ukraine currently studying at VanArts in Canada.

Vancouver Institute of Media Arts (VanArts) awarded 25 full tuition scholarships in April 2022 to Ukrainian refugees fleeing from the Russian invasion. These students are now three months into their studies, and most have arrived safely in Vancouver. To build on their effort, VanArts is launching a new 50% tuition scholarship drive to Ukrainian refugees for full-time programs starting September 6, 2022.

“We were overwhelmed by the response to our first scholarship offer in April, and we wanted to do something more,” said Ken Priebe, VanArts’ Communications & Student Services Manager. “The Ukrainian students we’ve already welcomed to VanArts have been a great addition to our student body.”

These scholars will be joining the first group of students to begin in VanArts’ brand-new purpose-built campus space on the 7th floor of 333 Terminal Avenue in Vancouver. Other advantages include financial assistance from the Canadian government, granting of work permits under the CUEAT program, and a booming demand for jobs in the industries VanArts trains for.

“We are honoured to give this opportunity to Ukrainian refugees, and to provide training that will help them launch a creative and rewarding career in Canada,” said VanArts President Alan Phillips.

More details on the VanArts scholarship program for Ukrainian refugees are available here.

Established in 1995, Vancouver Institute of Media Arts (VanArts) is ranked at #2 worldwide by Animation Career Review, Rookies-certified and located in Vancouver, the #1 Hub for film, digital entertainment and tech industries. The school’s mission is to unlock the creative and career potential within each student. With the help of specialized instruction, small class sizes, industry- experienced faculty and connections to the creative industries in Vancouver, VanArts graduates have gone on to work for major studios, see their names in the credits of major feature films, and start their own companies.