The small city of Lancaster, PA — known for its Amish heritage — is celebrating a high-tech milestone as the first graduating class of animators and game designers in the Digital Media program toss their caps at the Pennsylvania College of Art & Design. PCA&D introduced the major in 2014. The school’s philosophy of “Small College, Big Reach” is evident in this eight-member 2018 class.

Despite the small class size, students sought to make a big impact within the college and beyond. Brittany Blair was the first president of the college’s SIGGRAPH chapter, which she founded her sophomore year. Shortly after, Blair was among four PCA&D students to be named student volunteers at the SIGGRAPH 2017 in Los Angeles. Digital Media students also gained valuable mentorships from artists working at companies such as DreamWorks Animation, Blue Sky Studios, The Third Floor, Sony Games and Disney Interactive.

“The type of students we produce are technically fluent in computer graphics, but also well-rounded in storytelling and produce meaningful work,” said founding faculty Natasha Warshawsky. “Being a small college tucked away in a secret corner of Pennsylvania, our students support each other and form a helpful community.”

The fruits of this first class are showcased in the video game LuraNova; an ambitious thesis project created by seniors Blair, Ian Williams and Steven Jennings. Set in a post-apocalyptic world; a young woman wakes to find herself inside a strange robotic body as she struggles to piece together both the fall of civilization and her family’s past. The team surpassed department requirements creating both a cinematic trailer and a playable game demo.

“Working in a group means you’re more than just a number of people. You are the project you’re creating, which means everything should always be open,” noted Jennings. “I have a passion for creating; whether it’s characters, props, or entire worlds.”

Jennings was the recipient of the inaugural Digital Media department senior award during the May 4 graduation ceremony. 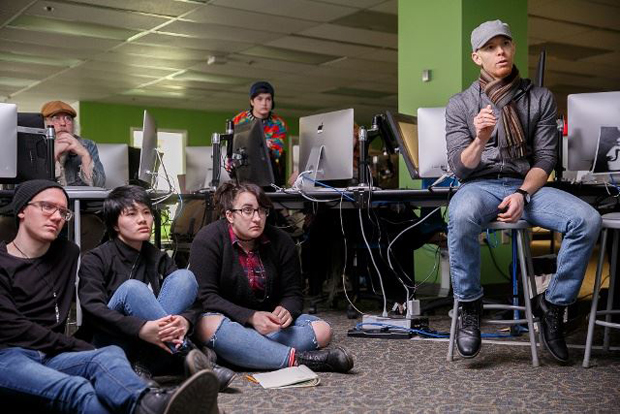