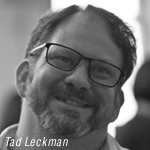 Leckman ,who created the Jedi Masters Program at Lucasfilm and has more than 15 years of experience in VFX production and training, will oversee curriculum development, student training and program quality.

Before joining Escape Studios, Leckman was the director of training at Lucasfilm for their Singapore studio, where he developed and managed the Jedi Masters Program. He was responsible for animation, visual effects and video game artist training, as well as educational outreach for the company. Prior to that, he was the chairman of visual effects for the School of Film and Digital Media at Savannah College of Art and Design. Leckman started his teaching career at San Francisco’s Academy of Art University, where he pioneered the School of Animation and Visual Effects curriculum as a lead professor.

“I am excited to be a part of Escape Studios and look forward to preparing students for careers in visual effects and animation,” said Leckman. “This is a tremendous opportunity to shape new talent for an ever-changing, creative industry.”

Leckman has also worked within the industry in various roles. At ILM, he specialized in  previsualization and animatics and also created and managed ILM’s “Rebel Mac Unit,” which used off-the-shelf hardware and software to create CG elements and final shots. Leckman has worked on such movies as Men in Black, Star Trek: First Contact, Space Cowboys, Terminator 3: The Rise of the Machines, Planet of the Apes, Star Wars: Episode II — Attack of the Clones, Gangs of New York, The Mummy, Hulk, Minority Report, Van Helsing and Peter Pan.

“I am thrilled to welcome Tad to our L.A. campus,” said Dom Davenport, CEO and founder of Escape Studios. “Tad’s background, talent and industry knowledge make him a key addition to Escape Studios. With Tad on board, our students will receive the best possible training and career guidance that we’re known for.”

You may also like...
Related Topics:Escape Studios, Lucasfilm, Tad Leckman