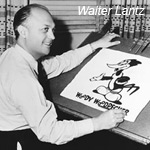 Thanks to a $540,000 grant from the Walter Lantz Foundation, Loyola Marymount University’s School of Film and Television will be able to outfit its new Animation Lab with state-of-the-art digital equipment and technology—giving students access to the same kind of hardware, software and equipment that Hollywood professionals use.

The grant is one of the largest gifts by the Foundation to a university animation program, and will also help the school acquire computers for the newly created motion-capture stage, a 3D scanner, lighting for stop-motion and upgraded and networked workstations to facilitate student collaboration. LMU is the only Los Angeles area school to provide university-level courses in pre-viz and virtual cinematography.

“Animation has transformed from simple cartoons into a medium, language, and mode of thought that crosses multiple disciplines in the art of filmmaking,” said Stephen G. Ujlaki, dean of the School of Film and Television. “This grant from the Walter Lantz Foundation will help our students bring the traditions of animation into the 21st century and beyond.”

The Walter Lantz Foundation seeks to serve the memory of the celebrated animator behind Woody Woodpecker, Chilly Willy and Andy Panda by supporting the future and heritage of the animation arts.