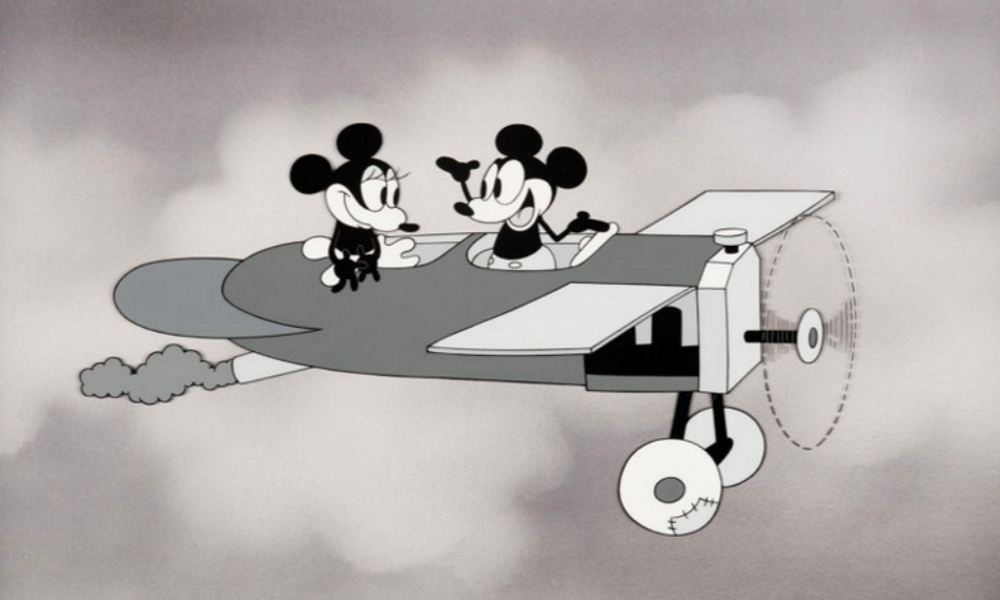 I currently teach animation history at two colleges in Southern California: CalArts in Valencia and Woodbury University in Burbank — two different schools with pretty substantial animation programs. I show over 150 animated shorts each semester, and I feel all of them are crucial must-see films.

Picking a Top Ten of Absolute Musts is a bit difficult. The list below is only my subjective opinion – every other animation professor I know would surely have a different selection. Since I lean towards Hollywood character animation, my list essentially reflects that. However, a well-balanced history course of this type must cover the whole spectrum: Animated features, Japanese anime, stop motion, the silent era, television cartoons, commercials … and yes, even a few lesser efforts to give the students some proper perspective. Not everything produced in the golden age was a gem. But these are. Here are my top 10 essentials every animation student needs to see before they graduate, in my humble opinion: 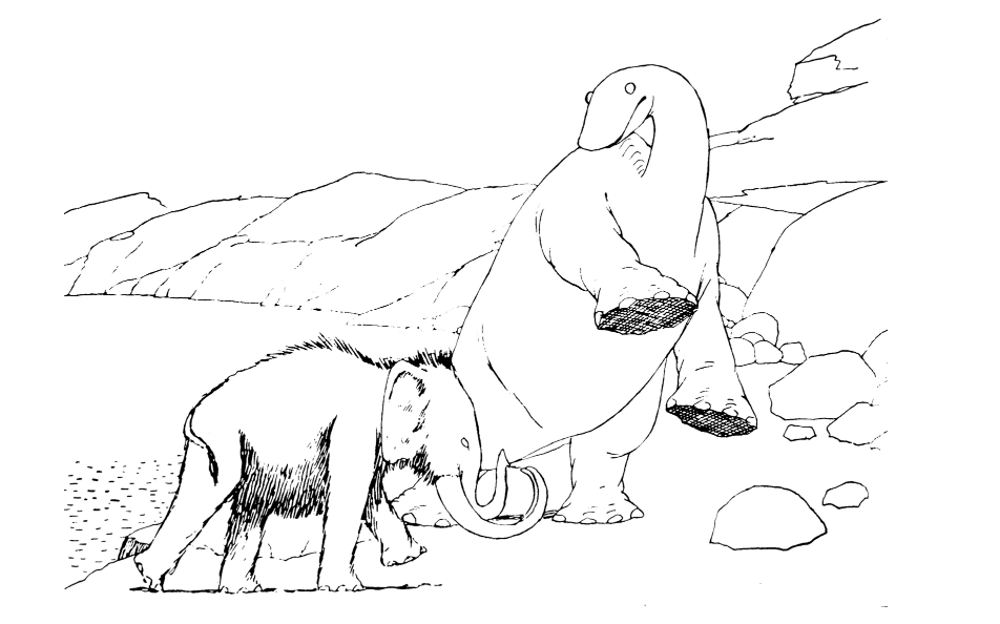 Gertie the Dinosaur (1914). Not the first animated short, but a remarkable pioneering achievement by a single artist. And what an artist! Winsor McCay, in general, should be studied and admired for the whole of his career. However, his Gertie was both an inspirational film and a game changer. Inspirational, because it gave a glimpse of what animated films could be — a moving drawing that could make us laugh, and make us feel. The film itself interacts with a live performer — pure magic, which led to the game changing aspect: Suddenly, newspaper cartoonists (and other cartooning wannabes) of every stripe saw an opportunity to make a career with animated films. Thus the studio system was born, and cartoons became a staple of every movie program.

Plane Crazy (1928). Plane Crazy is the first Mickey Mouse cartoon – and although the third one, Steamboat Willie, is more significant in the history of things, Plane Crazy is a tour-de force of silent era rubber hose animation. Especially remarkable is that it is the work of essentially one man, Ub Iwerks. Plane Crazy establishes the scalawag personality of early Mickey Mouse – and, of course, his lady love Minnie Mouse. This Pre-Code pilot film introduces Mickey as more of a rogue, and Minnie with a lot more spunk. Walt Disney and Iwerks constructed the story to show off the spectacle and perils of airplane flight. It’s fast, funny, visually appealing – and the beginning of a creative and business empire. 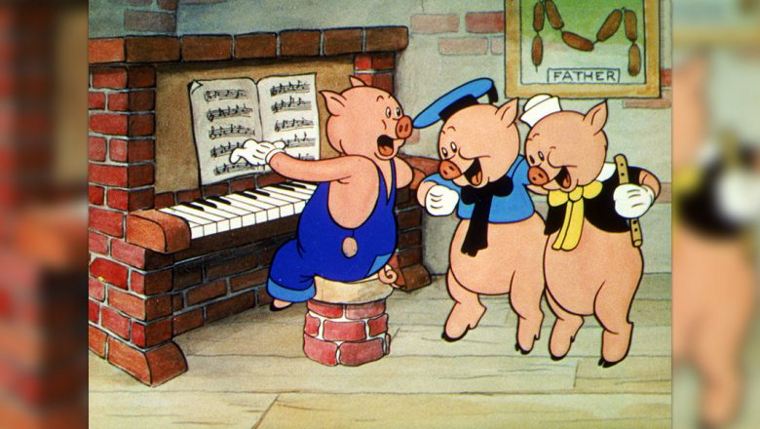 Three Little Pigs (1934). Perhaps the single most popular animated short of the 1930s, and significant in several ways. Utmost among them, the film cracked the character animation code: Three identical characters, each with a different personality. This caused ripples amongst the animation community — and delighted audiences at the time. The film’s story echoed current events as moviegoers treated the film as an “editorial cartoon” — the pigs representing the Depression Era populace, the wolf reflecting their oppressors (the landlord, the boss, the bankers, etc.). The song, “Who’s Afraid of the Big Bad Wolf” became a huge hit and began a trend of original songs being created for animated films. Iconic! 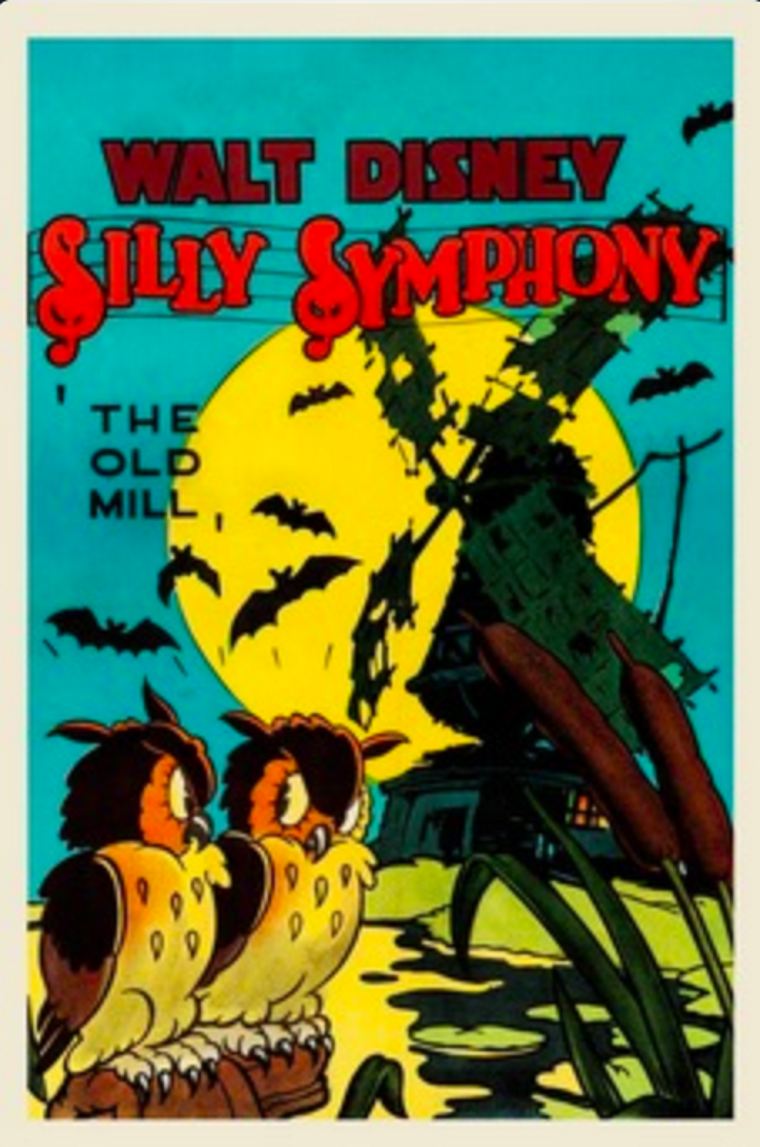 The Old Mill (1937). Well, you just have to see The Old Mill. This was Disney’s first use of the multiplane camera, which added dimensional depth to the usually flat animated screen. But, it’s also a rare non-narrative Disney short — there is no story beyond our observation of birds and animals taking refuge in a ramshackle windmill during a thunderstorm. The direction, by Wilfred Jackson and Graham Heid, is powerful, and the score by Leigh Harline is unforgettable. A superior piece of Disney animation — perhaps the pinnacle of Disney’s work in shorts (Walt would soon devote his full attention to his feature films). A masterpiece. 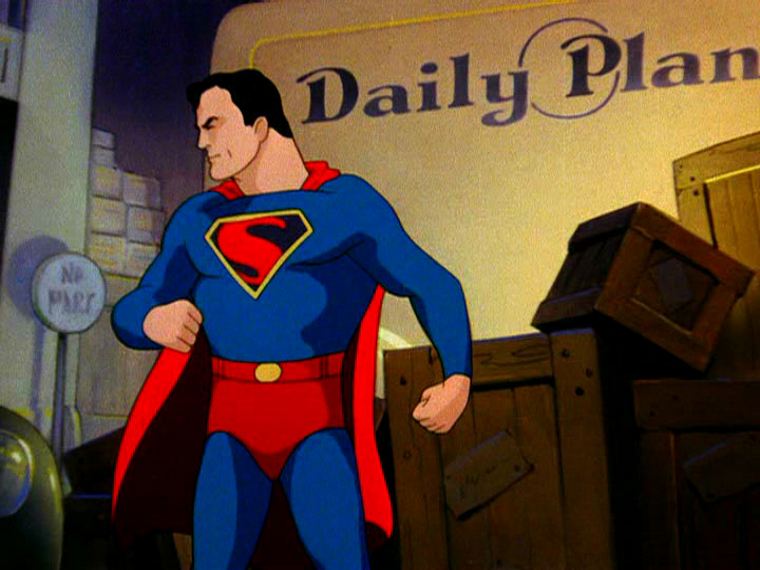 Superman (1941). Max Fleischer is best known for his Popeye and Betty Boop cartoons, his pioneering work with sound cartoons, three dimensional sets, and the famous “bouncing ball”. But my one choice from the Fleischer canon on this list is his adaption of the comic-book superhero Superman. Considering the popularity of comics in the movies these days, this 1941 film was the first-ever superhero story to reach the screen. It was also faithful to the original comic art, trailblazing a new style of adventure animation. (Before this film, all animated cartoons were funny animals or fairy tales.) Using dark “film noir” settings and realistic animation (later entries utilizing the Fleischer invention, the rotoscope), this series of Superman cartoons inspired later generations in future attempts at serious, dramatic storytelling, including the work of Bruce Timm (Batman: The Animated Series) and Hayao Miyazaki (Castle in the Sky). 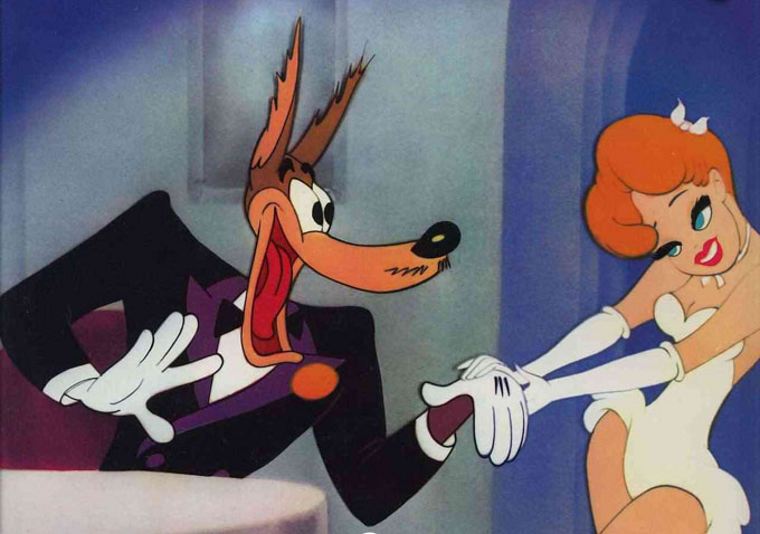 A Tex Avery Cartoon. There are too many good choices for me to select only one. Fred “Tex” Avery drifted into the cartoon world in the 1930s as an animator for Walter Lantz (on the Oswald the Lucky Rabbit cartoons for Universal), then joined Warner Bros. as a director, creating Daffy Duck and significantly contributing to the creation of Porky Pig and Bugs Bunny. At MGM between 1942 and 1954, he created over 60 short masterpieces and characters such as ultra-zany Screwy Squirrel, sexy Red Hot Riding Hood and the dead-pan dog, Droopy. But his one-shot wonders — King Size Canary, Bad Luck Blackie, Lucky Ducky, Magical Maestro, Symphony in Slang, etc. — still inspire to this day. Take your pick. Each one contains wild “takes”, fast-paced chases and broken four walls galore. Avery’s cartoons personified the wacky 1940s Hollywood cartoon, the ones given homage in Who Framed Roger Rabbit. 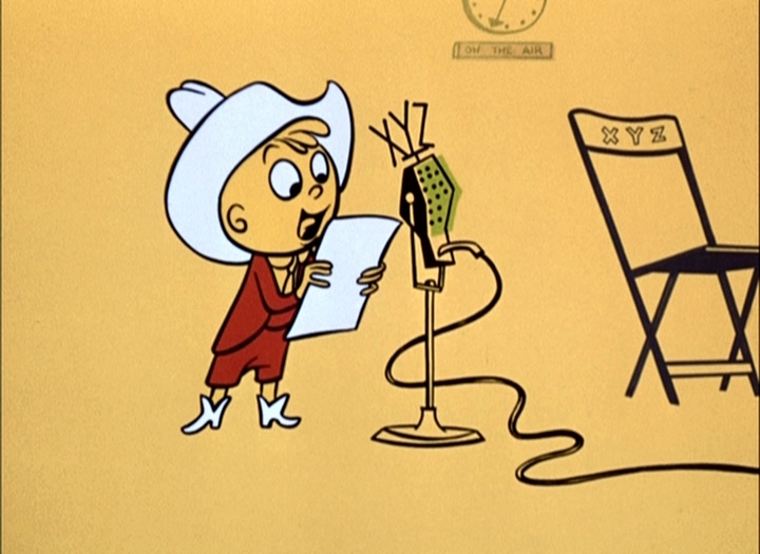 Gerald McBoing Boing (1950). UPA’s Oscar-winning breakthrough film, with a story by Dr. Seuss, was another game changer. It’s the story of a little boy who speaks via sound effects (the original concept was designed for a children’s record), with modern art-inspired design that broke the Disney mold for what a cartoon — heck, what an animated film — could look like. This inspired artists around the world to try animation, now that the notion that it had to look like Disney (or Bugs Bunny or Tom & Jerry) was dispelled. UPA’s design sense worked its way into all cartoons of the decade — including Disney’s — as well as TV commercials and the burgeoning TV cartoons of the late 1950s. This first McBoing Boing film is delightful as it is, but its influence is deep and long lasting. A must-see. 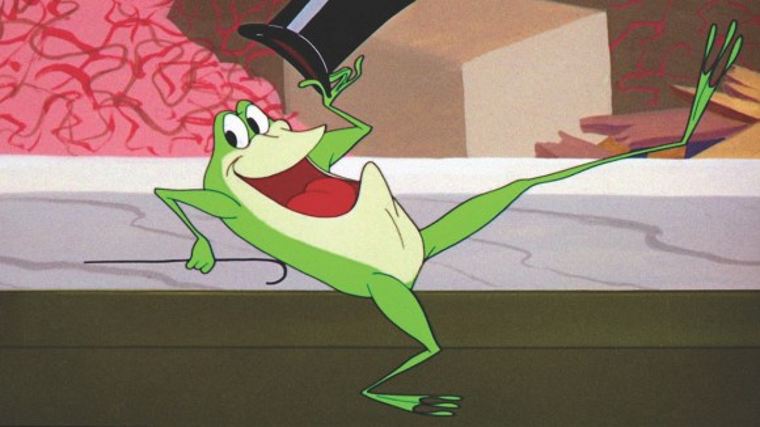 One Froggy Evening (1956). Among the many mini-masterpieces created by Chuck Jones is this film— one which is not known by its title, but simply referred to as “the cartoon with the singing frog.” A construction worker finds a box containing a ragtime-crooning toad and sees him as a key to fame and fortune. Except the frog will only sing for the poor guy when he’s alone. The story (by Jones’ longtime collaborator Michael Maltese) is told without dialogue, with Jones’ comic poses and facial expressions masterfully carrying the show. The Golden Age of the Hollywood cartoon at its finest and the Warner Bros. Cartoon factory at the height of its powers (and that’s saying something). Elegant and sublime. 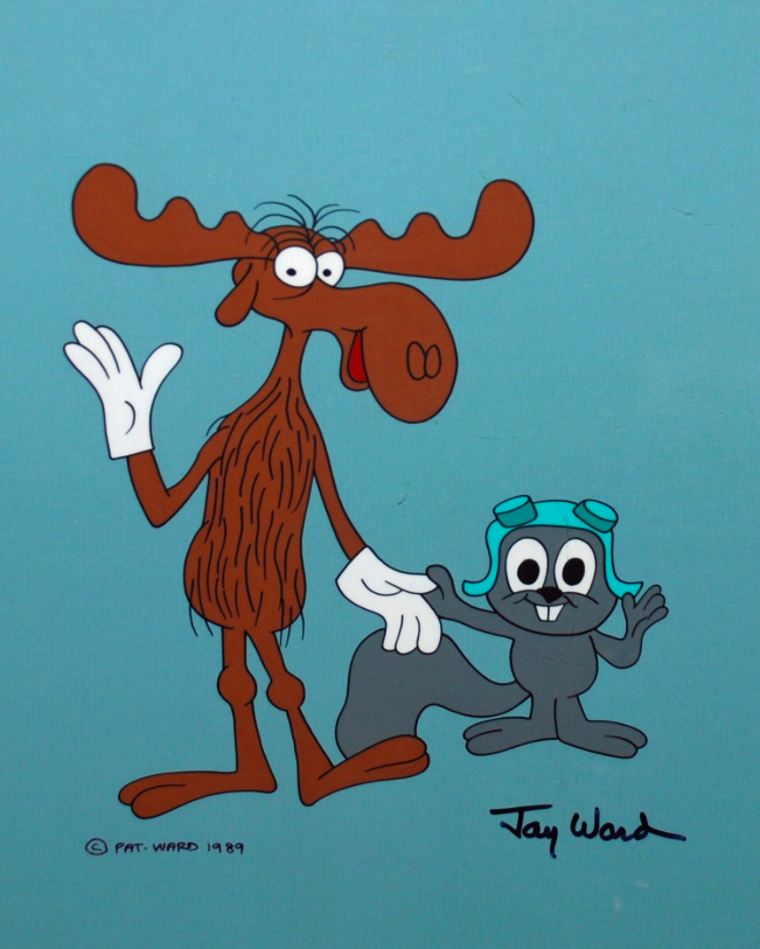 The Adventures of Rocky and Bullwinkle and Friends

The Adventures of Rocky and Bullwinkle and Friends (1959). This may be far afield of my other choices, but I think cartoons made for television back in the ‘50s and early ‘60s deserve their due. The budgets were small, the animation was limited and the animators had to re-invent themselves for this new medium. Hanna-Barbera had blazed a trail and created a new industry — which certainly thrives today. Among their competitors you can discover a few nuggets of gold, none better than the cartoons and characters from the Jay Ward studio. Essentially made up of castaway animators from the brilliant UPA, Ward and his crazy crew — including artists like Bill Scott, Pete Burness, Bill Hurtz and others — came up with Mr. Peabody and Sherman, George of the Jungle, Dudley Do-Right, Super Chicken and many more. Rocky and Bullwinkle were Ward’s signature super-stars, and I show the first episode (“Jet Fuel Formula”) in my classes. The artwork (animated, barely, in Mexico) is all over the place, but that adds to its charm. The voices and dialogue really make it work. What we learn is: funny is funny no matter what your age, or how you animate it. 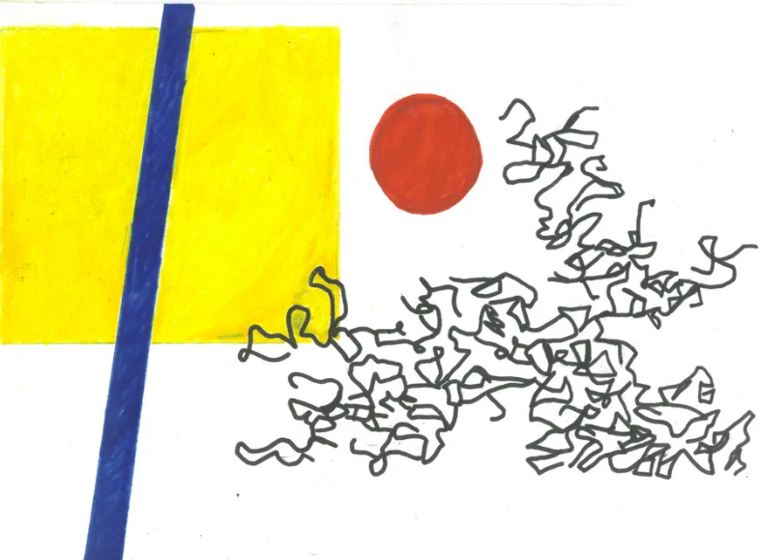 Dot and the Line

The Dot and the Line (1965). Two by Chuck Jones make my list, but this one is completely different from the last — and from most of his output. An adaptation of a clever picture book (by Norton Juster), the film explores the romantic relationship between two geometric shapes, a “dot” and a “line”. This simple little premise is so beautifully executed (and narrated perfectly by actor Robert Morley) it earned Jones an Academy Award. But more significantly, the short shows that getting emotion and humor out of two essentially faceless outlines is achievable and worthwhile — and that experimental animation can be very entertaining. Witty dialogue, gorgeous art direction (by co-director Maurice Noble) and a tasteful score (via Eugene Poddany) complete the package.

That’s not all, folks! There is no room here for me to add the essential work of directors such as Bob Clampett, Osamu Tezuka, Friz Freleng, Frank Tashlin, Ward Kimball, George Pal, John Hubley, Gene Deitch, Bruno Bozzeto, Richard Williams, Ray Harryhausen, Lotte Reiniger, Norman McLaren, Hanna-Barbera or Hayao Miyazaki (and dozens more…). You’ll just have to take my word for it. The history of animation is filled with great works that can inspire the students of today to create the animated masterpieces of tomorrow. This ”top 10” is only the beginning.

Jerry Beck is an animation historian and cartoon producer and former studio exec with Nickelodeon and Disney. He has written numerous books on animation, including The Animated Movie Guide, Looney Tunes: The Ultimate Visual Guide and The 50 Greatest Cartoons. He teaches animation history at CalArts and Woodbury University in Burbank. Beck is also the president of ASIFA-Hollywood and blogs about classic animation at cartoonresearch.com.