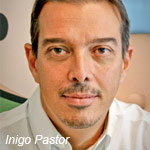 The company behind Pocoyo, Zinkia Entertainment, has named Inigo Pastor as general manager.

As General Manager, former Disney veteran Pastor will be responsible for the day-to-day operations of Zinkia and will also focus on the retail and commercial aspects of the Company’s numerous entertainment brands, including its flagship property, Pocoyo.

Pastor joins Zinkia after nearly a dozen years with The Walt Disney Co.  He most recently served as executive sales director for Spain and Portugal, where he was charged with establishing, developing and executing an integrated sales strategy for the entire Disney product portfolio. Prior to that, he spent five years in executive sales as the trade market & distribution director for Spain for Walt Disney Studios Home Entertainment. He joined The Walt Disney Co. in July.

Based in Zinkia Entertainment’s Madrid headquarters, Pastor’s appointment was was made by Jose María Castillejo, co-founder and chairman of the company.

“Inigo is a hands-on executive with strong team-building and leadership skills,” said Castillejo. “In his role as general manager, he’ll be charged with oversight of our general operation and ensuring that we remain on track to meet our company objectives for the months and years ahead.”

Pastor began his career in retail working in management for ALDEASA, S.A. for four years after earning a degree in law from Universidad Autónoma de Madrid.  Pastor has also earned a master’s degree in digital business from Spain’s ESIC University.