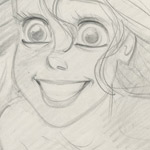 While most Animation Magazine readers will certainly know who he is, Keane more or less is the superstar animator of the Disney renaissance. Credited as the lead animator on characters such as Beast in Beauty and the Beast, Ariel in The Little Mermaid and Tarzan, he along with a team of other lead animators such as Andreas Deja and Eric Goldberg are credited with revitalizing Disney hand drawn animation in the ‘90s after a dry spell in the ‘80s. Prior, Keane had gained respect for his work on the Bear in The Fox and the Hound and Ratigan in The Great Mouse Detective, among other work.

More recently, he dropped out of directing the film Tangled to instead direct the film’s animators on how to give greater expression to the characters in the style of old school Disney. In addition to his work, his numerous appearances in Disney documentaries and his lectures at CalArts have cemented him as a spokesperson for the preservation of the Disney animation style.

The exhibit will include both production art and personal work, as well as collaborative art from his short films Nephtali and Duet, as well as Dear Basketball, on which he collaborated with Kobe Bryant and composer John Williams.

The exhibit runs March 8th to September 3rd, cost free with admission. Members of the museum will be able to see it early on March 7th. More information available here.