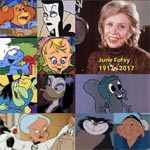 June Foray, known to generations of cartoon lovers for her iconic voice roles like Rocky the Flying Squirrel and Looney Tunes’ Granny, has died at age 99. The news was made public late Wednesday evening. Foray would have celebrated her 100th birthday on September 18.

ASIFA-Hollywood president Jerry Beck stated: “On behalf of ASIFA-Hollywood, of which June was a founder, we are mourning the passing of animation’s best friend. She has touched so many lives: with her voice that of so many classic cartoon character, her efforts to create ASIFA, to maintain the Academy’s Oscar for Best Animated Short and her leadership in crafting the category of Best Animated Feature. She was one of a kind. A trailblazer, a great talent and a truly wonderful person. We will never forget her.”

Foray’s hundreds of acting credits include other popular characters like Natasha Fatale (The Rocky & Bullwinkle Show), Magica De Spell and Ma Beagle (DuckTales), Jokey Smurf, Witch Hazel (Looney Tunes) and Cindy Lou Who (How the Grinch Stole Christmas). Continuing to work well into her 90s, the leading lady of animation reprised her classic roles and took on fresh challenges for a range of projects like The Marvelous Misadventures of Flapjack, The Garfield Show and Disney’s Mulan. She donned the Rocky mantle once more for Gary Trousdale’s Rocky and Bullwinkle short in 2014.

Born June Lucille Forer in Springfield, Massachusetts, Foray started working in local radio dramas as a child, and continued in radio after graduating high school when her family relocated to Los Angeles — in addition to frequent appearances on popular shows, she had her own Lady Make Believe show. Foray also worked at Capitol Records making children’s albums and comedy records.

Foray’s long career in animation began when the Walt Disney studio approached her to play Lucifer the cat in Cinderella, which led to a series of gigs with the studio — mostly uncredited. She had a starring role in the 1952 Donald Duck short Trick or Treat as Hazel the Witch, a name and occupation combination that would prove quite popular in her character roster. Through the 1950s, Foray also worked with animation icons Tex Avery, Walter Lantz and Chuck Jones. Her best known work was in Jay Ward’s The Rocky and Bullwinkle Show, which ran from 1959 to 1964, playing Rocket J. Squirrel and villainous Russian minx Natasha Fatale. Foray also worked on other Ward toons, playing Nell in Dudley Do-Right, Jane in George of the Jungle and Marigold in Tom Slick.

You can watch an in-depth Archive of American Television interview with Foray about her voice acting career here.

In addition to her career as a performer, Foray played a key role in the animation industry as one of the original members of ASIFA-Hollywood, founder of the Annie Awards, and lobbied for 20 years for the creation of the Best Animated Feature Oscar — a goal which finally was met when the first award was bestowed on DreamWorks Animation’s Shrek in 2001.

Foray had been working in animation for about 20 years when the casual group that would eventually become ASIFA began to set up. ASIFA West Coast was founded in the 1960s, comprised of Foray, Carl Bell, Les Goldman, Herbert Kasower, Ward Kimball and Bill Littlejohn. In the early ‘70s, Foray suggested the group host an awards dinner: “I was thinking that there were the Grammys, the Tonys, the Oscars, but nobody recognizes animation,” she said in an interview with Variety. The first event gathered some 400 attendees to honor Max and Dave Fleischer. At the 1995 Annie Awards, she was presented with the first June Foray Award, which was established to recognize “a significant and benevolent or charitable impact on the art and industry of animation.”

Foray received a Daytime Emmy in 2012 for playing Mrs. Cauldron on The Garfield Show, and was honored with a Governor’s Award in 2013. Her many achievements have also been marked with a Walk of Fame star and a Hall of Fame Award from the World Animation & VFX Summit. A documentary about her life and career, The One and Only June Foray was released in 2013. 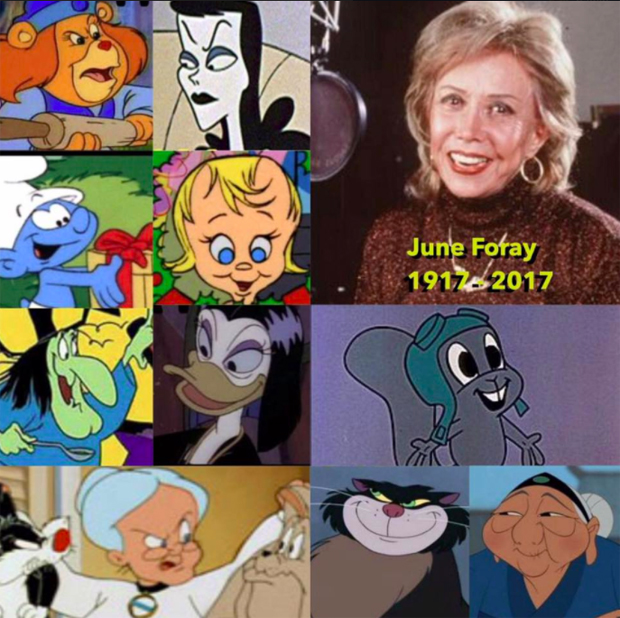