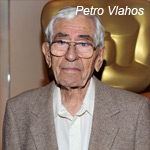 Special effects pioneer Petro Vlahos passed away at 96 on February 10. Vlahos, who improved the composite-image process known as the blue-screen effect for the 1959 epic Ben Hur also set new standards in special effects in the memorable Dick Van Dyke dancing with the penguins in Disney’s 1964 feature Mary Poppins. His contributions to the art form built the ground work for vfx-driven features such as Star Wars and Titanic.

“It’s hard to emphasize the import of his inventions,” Bill Taylor, vfx supervisor noted. “He created the whole of composite photography as we know it.”

He advanced the blue-screen effect in a major way by minimizing a strange side effect — halos that appeared around actors and objects when footage shot against a blank screen was fused with action shots. The process would eventually include green screens.

Vlahos also held a patent for a similar technique called sodium vapor composite photography. His version yielded results that were considered superior to the blue-screen process. The innovation was used in films such as Mary Poppins, The Love Bug, Bedknobs and Broomsticks and The Birds.

In addition, Vlahos held more than 35 patents, including low-cost screen-brightness meters, camera-crane motor controls and a method for detecting distortion in soundtracks. He also founded Chatsworth-based Ultimatte Corp. in 1976 to research and develop composite technology. Two years later, he received an Emmy Award for his work. Vlahos and his collaborators were awarded an Oscar for the composite processes they developed in 1965. He also shared another Academy Award with his son, Paul, for creating Ultimatte’s blue-screen process.