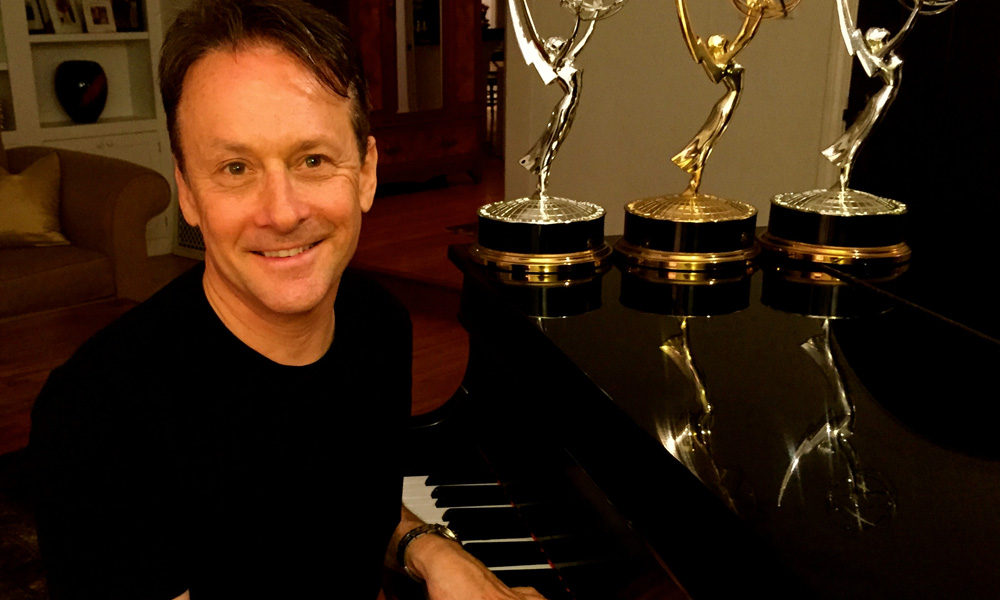 Go ahead – go to YouTube and type in a search for “Yakko’s World but.” You’ll find yourself in an endless slew of fan remixes. Add up the individual views of each video, and it’s possible that “Yakko’s World” is the most replayed song online. But I can’t be certain — I have been scrolling down the list of remixes since I started writing this article, and I have yet to reach the bottom.

The original “Yakko’s World,” a brief musical clip that originally aired in 1993 during the first season of Animaniacs, lists all the nations of world in rhyming verse. It was written by Randy Rogel, who went on to pen most of the songs for Animaniacs (and the follow-up series, Histeria!). We all know that Animaniacs, which aired its final episode in 1998, is being rebooted with original episodes on Hulu (stay tuned for summer 2020). What many fans may not know is that, along with original voice actors Rob Paulsen, Jess Harnell, Tress MacNeille, Maurice LaMarche (Yakko /Pinky, Wakko, Dot, and the Brain, respectively), Randy Rogel has also been tapped to help pen several new tunes. Like before, some songs are a classroom educator’s dream, while others are character-specific.

Other veteran composers include Julie and Steve Bernstein, protégés of the original show’s music director, the late Richard Stone. They’re in good hands with show-runner Wellesley Wild, previously a writer and producer for Family Guy. 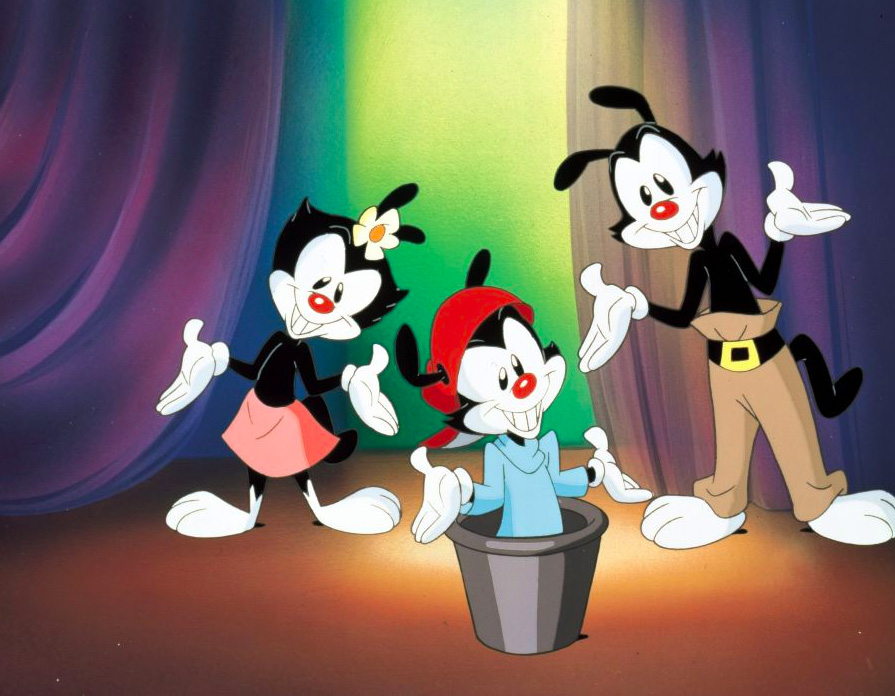 But Rogel’s route to showbiz is more circuitous than most. He was born in San Diego, California in 1954 and broke into local theater at a young age. Before he graduated high school, he had performed myriad professional shows at venerable venues like The Old Globe and Circle Arts Theatre. These hosted national tours starring television stars of the day, including traveling productions of Sid Caesar’s Show of Shows, Borscht Belt comedian Jan Murray, and Bob Hope contemporary Marilyn Maxwell. The impact was undeniable. “I got my training and my exposure to great material of the old classic Broadway style, which is now the style I write in,” says Rogel.

He then decided to put theater on hold. “For some reason that I can’t explain, the military academies appealed to me.” His application was accepted to both West Point and the Air Force academy. “I chose West Point because it seemed the more prestigious to me. I left musical theater to pursue an education and to see the world as a military officer.” Rogel had no misgivings about West Point. Each year the senior class writes and performs a campus musical called The Hundreth Night Show. Rogel wrote the show for his class. “It was a resounding success and I thought, hey, maybe I’m good at this writing thing,” he says.

An Officer and a Thespian

Rogel was among West Point’s graduating class of 1976, the cohort which produced more appointed U.S. generals — the officers who led the charges into Iraq and Afghanistan — than any other in American history. Following graduation, Rogel was posted to Italy as a field artillery officer in the combat arms. “I did my graduate work while I was in Europe and took a degree in International Relations — basically political science — from Boston University. Including West Point, that gave me a total of 10 years of military service.” When he graduated, he went corporate. “Corporations love junior military officers because they all know about chain-of-command and lines-of-communication, and we weren’t used to working for a lot of money. Procter & Gamble hired me and moved me to Seattle.”

There he was working in sales, but he also started auditioning. “I was cast pretty quickly in several shows and I soon began working non-stop as an actor; it started getting in the way of my regular job.” Soon Rogel asked himself, “Twenty years from now, what will I want to have done with my life? I knew that I wanted to work in film and television.” Rogel had already earned a couple promotions before he quit, drove to L.A., slept on a friend’s couch, and auditioned while submitting writing samples. He landed a job at Warner Bros. in early 1991 writing for the acclaimed Batman: The Animated Series.

Under the guidance of showrunner Alan Burnett, the series was an instant hit. Down the hall, Steven Spielberg’s team led by executive producer Tom Ruegger was wrapping up Tiny Toon Adventures and developing Animaniacs. Rogel told them that he should work on the new Animaniacs show. “They told me, ‘No, you write that dark sh*t, and Animaniacs is a comedy!’”

Rogel’s mother had bought his young son a globe for his birthday. “I sat with him, showing him the countries of the world — here’s the United States, Canada, Mexico, Panama — when it occurred to me that this might make an interesting song. When I was auditioning to write for Animaniacs, I thought that song about all the countries might be fun for the show, so I submitted it to Tom Ruegger. He liked it and showed it to Steven Spielberg. He liked it and they had me write another one listing all the states and their capitals. They liked that one, too, and next asked me to write a song about the entire universe. I thought, ‘Jeez guys, we can do more than list songs,’ so I began to write other songs like ‘I’m Mad’, ‘Variety Speak’, ‘I’m Cute’, et cetera.” 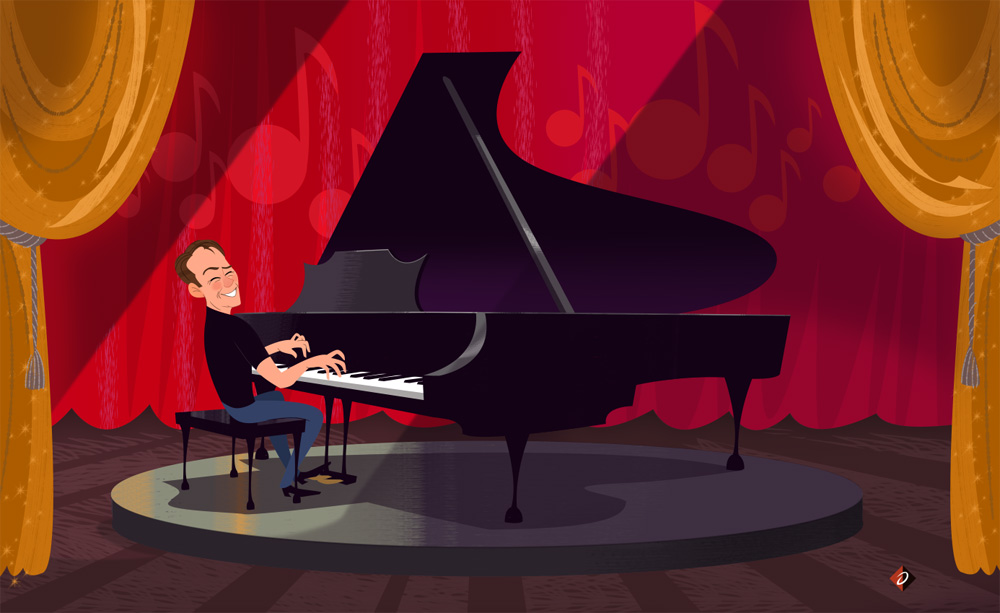 So how does he go about crafting a song? “I try to ask myself, ‘What’s the heart of the song?’” Rogel explains. “And that basically gives you a hook. That hook begins to suggest a rhythm to me, and then I go down that track. Maybe it will begin to suggest the beginning of a melody. At that time, I probably have lots and lots of lyrics in my head as I’m writing down little clever things. I go back and forth between the rhythm and the melody, and I ask myself, is this funny? Is this a good piece of work? You have to be brutally honest with yourself, because if it doesn’t work for you, it’s definitely not going to work for anybody else.”

He uses familiar, public domain melodies for informational songs, and original melodies for the others. After all, it’s far more clever to fit the list of the U.S. presidents into the well-known measures of the “William Tell Overture” than to write a melody around the list. Sometimes, though, he makes exceptions. One of his songs for Animaniacs about the deadly earthquake of 1994 was put to Schumann’s The Merry Farmer — just for ironic contrast.

Occasionally there was push-back from network execs. “They said, ‘These songs will be over the kids’ heads, and we should be writing more like Barney,’” recalls Rogel. “I remember saying, ‘No, no, kids are a lot smarter than you think they are, and we should write up to them.’ Tom Ruegger and certainly Stephen Spielberg really supported that idea.” Combine that with the timeless influence of golden age Broadway, and you have a show with a soundtrack that never grows old.

Rogel went on to win three Emmys (10 nominations): two for his work on Animaniacs and another primetime Emmy for his writing on Batman. He has also won two Annie Awards: one for the Batman & Mr. Freeze: Subzero and one for his music on Histeria! He received a Peabody Award for his work on Animaniacs. In addition to writing and composing, he continued performing – Rogel has played Cosmo in 26 different productions of Singing in the Rain. He continues to work in animation, and has written for a wide variety of shows, including Disney’s The 7D, The 99, 1001 Nights and, most recently, Big Bad Boo’s acclaimed Hulu show The Bravest Knight.

For the last few years, Rogel has also been touring with Rob Paulsen in a show aptly titled Animaniacs in Concert, performing songs from his cartoon oeuvre. It’s not to be missed (this writer has seen it three times and counting). He is currently balancing all that with the development of an original off-Broadway stage musical.

But the real question is—what does Rogel think of the countless remixes of “Yakko’s World”? He responds, “I’m blown away, especially by the one that uses clips from different movies. That one deserves an Emmy of its own.”

Jake S. Friedman is New York-based author, teacher and artist. His book on the Disney Afternoon cartoons will be released in 2020. You can find out more at JakeSFriedman.com. 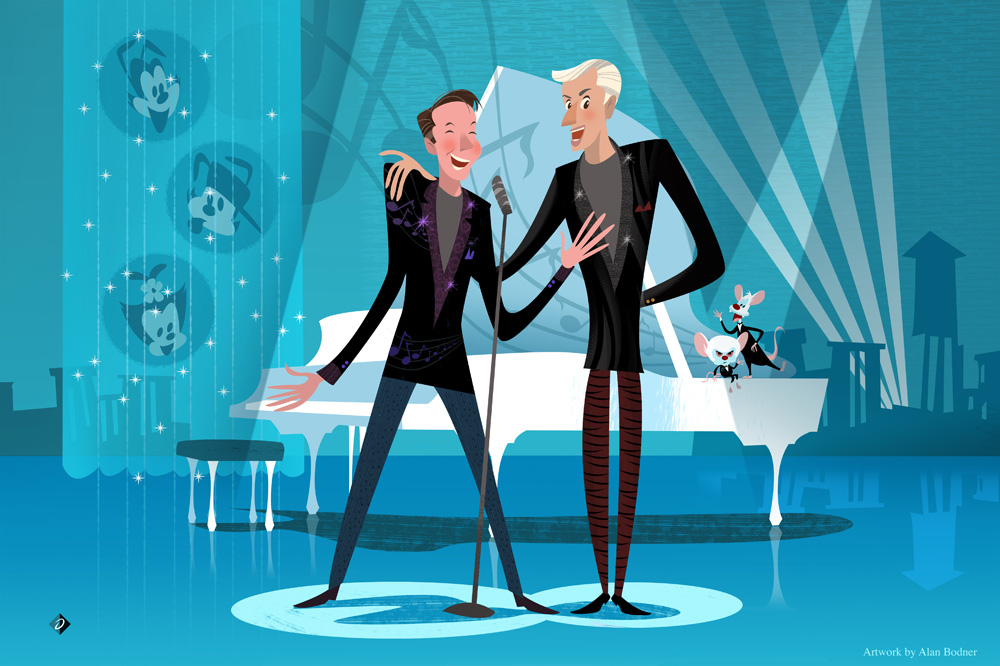