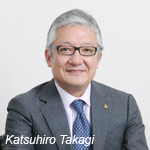 Takagi joined Toei over 30 years ago. In 2001, he was named Director of Character Licensing Dept. in which role he helped forge licensing partnerships on behalf of Toei Animation’s major animated brands. In 2006 he was promoted to Managing Director, then to Senior Director in 2011.

As President, Takagi will continue to build the studio’s international partnerships and expand the animation house into new markets with its expansive catalog of toon properties and its slate of new programming.

“As we roll-out several new and exciting titles before the end of the year, I look forward to working with our committed team,” said Takagi. “Toei Animation’s tremendous international appeal stems from the hard work and incredible talent of our creators, animators and staff, who every day, bring their passion and imagination together to create decades-lasting brands that speak to a global audience.”