Michiyo Yasuda — a widely respected animator and color artist whose four decade career included a span at Studio Ghibli from its first feature (Castle in the Sky, 1986) to Hayao Miyazaki’s last feature (The Wind Rises, 2008) — has died at age 77.

Born in Tokyo in 1939, Yasuda’s career began before her 20th birthday, in the ink-and-paint department at Toei Doga (now Toei Animation). The young artist honed her skills working on TV series and commercial projects before adding the feature animation department to her rounds.

While at Toei, Yasuda met future Studio Ghibli founders Isao Takahata and Hayao Miyazaki on the production of Little Norse Prince (1968). She first worked with Miyazaki as a color designer on the 1976 series 3000 Leagues in Search of Mother.

Yasuda would spend most of her career creating color designs for these two legendary animation directors. Her formidable credits list includes pre-Ghibli films like Future Boy Conan (1978) and Nausicaa of the Valley of the Wind (1984) as well as the studio’s Oscar-winning masterpiece Spirited Away (2001) and Howl’s Moving Castle (2004). Yasuda announced her retirement after Miyazaki’s Ponyo, but rejoined the studio to work on The Wind Rises.

“What I like best is when I am building up the colors in my head, thinking of how to get the tone worked out,” Yasuda told the LA Times in a 2009 interview about Ponyo and her career. “Color has a meaning, and it makes the film more easily understood. Colors and pictures can enhance what the situation is on screen.”

VIZ Media is releasing The Art of Castle in the Sky on Oct. 18; Yasuda served as color designer on the film. 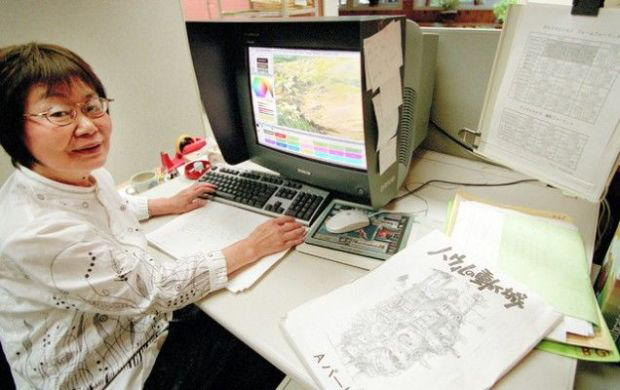 You may also like...
Related Topics:3000 Leagues in Search of Mother, Castle in the Sky, Future Boy Conan, Hayao Miyazaki, Howl's Moving Castle, Isao Takahata, Little Norse Prince, Michiyo Yasuda, Nausicaa of the Valley of the Wind, Ponyo, Sprited Away, Studio Ghibli, The Art of Castle in the Sky, The Winds Rises, Toei, VIZ Media