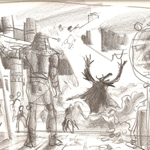 Veteran storyboard artist John Dorman died Saturday at the age of 58, according to a post on The Animation Guild blog. The cause of death has not been revealed.

Dorman began his career in 1974 as an assistant animator on The Nine Lives of Fritz the Cat. Within a few years, he was working regularly as a layout artist on animated TV series such as Tarzan, Fantastic Four and Plastic Man and a segment in the animated feature Heavy Metal.

In the 1980s, he worked as a story director on such series as Thundarr the Barbarian, Goldie Gold and Action Jack, Rubik the Amazing Cube, Mister T and Foofur.

Dorman’s credits as a storyboard artist include The New Adventures of Batman, Smurfs, Tiny Toon Adventures, The Ripping Friends and the 2005 animated feature Valiant. He also designed characters for several projects, including an animated Police Academy series.

The images in this story are from Dorman’s blog, which you can find at http://johndorman.wordpress.com.