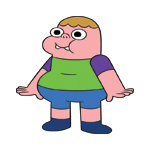 For the April 2014 issue of Animation Magazine, we caught up with first time show creator Skyler Page and creative director Nelson Boles to get the scoop on their upbeat new show Clarence, on Cartoon Network. Read more about it in the print magazine!

Animag: How did you come up with Clarence?

Skyler Page: Me and Nelson had been thinking about it before I started working at Cartoon Network [writing/storyboarding for Adventure Time and Secret Mountain Force Awesome] and then I found out they were looking for new content. That’s when I started adding new characters and rounding it out a little bit more so I could pitch it. But, we had been thinking about it at CalArts. The original idea didn’t come from a person, but a lot of the side characters are based on real people — the bully is based on Nelson, he’s named Belson — but Clarence is too pure and too good of a character to be based on anyone I know. I don’t know anyone that naive and positive.

How long were you in development?

Page: It was pretty quick. I left Adventure Time and started working on the short full time with this sort of stationary crew they have … They gave me a lot of time to work on the pilot, then I pitched it around, rewrote a bunch of stuff. Then I was given a small crew of two or three people to finish it as far as animation and art direction. I was so excited at the time, I was like, everything looks awesome! This is amazing! And then it got greenlit —

Nelson Boles: And then it was like, oh yeah, we can actually make it look how we want!

What sets Clarence apart from other animated comedies?

Page: I think our show is pretty clearly sort of striving to be realistic … keyword “striving.” When we were making the show it seemed like the market was pretty flooded with fantasy and random humor, and I remember a lot of shows when I was growing up that were more poignant and relatable to situations I was in as a kid. They had real characters who can’t use magic to get out of their problems. I felt like there was a need for that and that was our focus driving the show. So, we’re the little taste of reality in a sea of fantasy and non-realism.

So it’s more of a slice-of-life show?

Page: Everyone gets tired of reality, we get enough of it in real life! So there’s some fantasy in our show, too. One thing I like is we can do both and show the incongruity of the two — for example, showing a character’s ideal version of a situation and then what’s actually happening.

There’s a lot of variety in the character design, is there a Clarence “look”?

Boles: With all the characters, it’s almost like the inconsistency is the consistency. Some look like Muppets, some look like they’re from Steven Universe, but the art direction ties it all together. The way we justify it to ourselves is, the world is full of different looking people. On Bob’s Burgers and The Simpsons it’s like, oh, we have to find this one style so that everyone looks alike … I have a bunch of character designs on my wall right now and looking at it now makes it pretty clear that every character is very different.

Colin Howard [another CalArts student] did a lot of the designs very early on for the short and we stuck to a lot of them. A lot of personalities are based on his drawings.

Page: Another thing we do is we try to treat the background characters like they’re the star of their own movie. Whenever they’re on screen, they’re the focus. And we want to give them their own stories.

Boles: We’ve already decided to do that with some of the background kids. Another thing we’re trying to push with the show is there’s not just three main characters and everyone else is just there for a joke. Everyone has a chance to hang out … the world gets bigger and bigger.

Clarence’s friend Sumo kind of looks like Ghandi from Clone High — are you big Phil Lord and Chris Miller fans?

Page: I guess I have some of the DNA of that show in it because I drew another character and people were like, “Oh, that looks like Abe from Clone High!” But I swear I’ve never seen it! And those guys are like my animation heroes right now with The LEGO Movie. Sumo’s based on one of the guys here named Ryan. And also named after one of my cousins, too — this skinny, weird animal-kid, his nickname was Sumo.

What are your other major influences?

Page: When Nelson and I first met at CalArts we bonded over Ren & Stimpy. We had just got to CalArts, and they were doing this kind of Kumbaya circle where they worship Walt Disney and light a candle to him … and I was like, jeez, come on. So I stood up and said, “I’m going to go watch Ren & Stimpy, who’s coming with me!?” And that’s how we met.

Boles: We look at lots of live-action stuff, too.

Boles: [Laughs] Yeah a lot of YouTube videos. Also trying to pick up on the weirdness of people. That type of humor that makes you laugh but you don’t know why.

Page: A problem of mine with hollywood animation is for some reason we feel like promoting the prettiest, most perfect people. So we go the opposite way and find the ugliest, most messed up people.

What has been the biggest challenge of producing your first show?

Page: That it never stops! Once you do an episode, and it’s really good and you’re proud of it, you have to start over. Every time. It’s exciting, but it’s very challenging to keep that pace going. I wouldn’t say we have a shortage of ideas, it’s just a lot of man hours that go into each one.

Our episode turn-around is something like four or five months … on a good day.

Do you have a favorite scene from the first season (so far)?

Page: There’s a lot of great clumsy, physical comedy moments with Clarence. There’s one scene that doesn’t sound like much when we describe it, but he’s sneaking around and thinks he’s being very sneaky, and he knocks over this pile of CDs in [his friend] Jeff’s room.

Boles: And he’s wearing dinosaur pajamas, so he has dinosaur feet and he’s tip-toeing over everything with these big feet.

Page: One of my favorite parts of the show is I love when characters are talking about one thing and doing something completely unrelated … There’s a scene where Sumo and Clarence are talking about Jeff’s sort of obsession with neatness, and absentmindedly leafing through this cabinet and taking out boxes of cookies and trying one and tossing the box on the floor. Then Jeff comes in and starts absentmindedly putting them away. That’s the group dynamic: I’m the one that wrecks things and you’re the one who picks everything up.

Boles: The little things are what I think are funny a lot of the time. We try to add little subtle touches of people not being perfect at things.

Do you have any advice for other young animators who want to get their own show?

Boles: OK, OK … If you have a vision you really like, don’t let other people change it. Because down the line, changes will be made anyway. 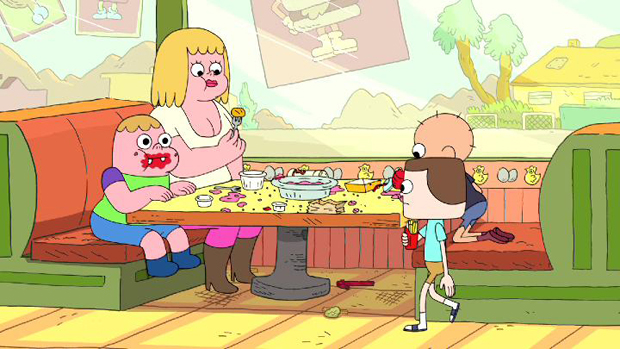 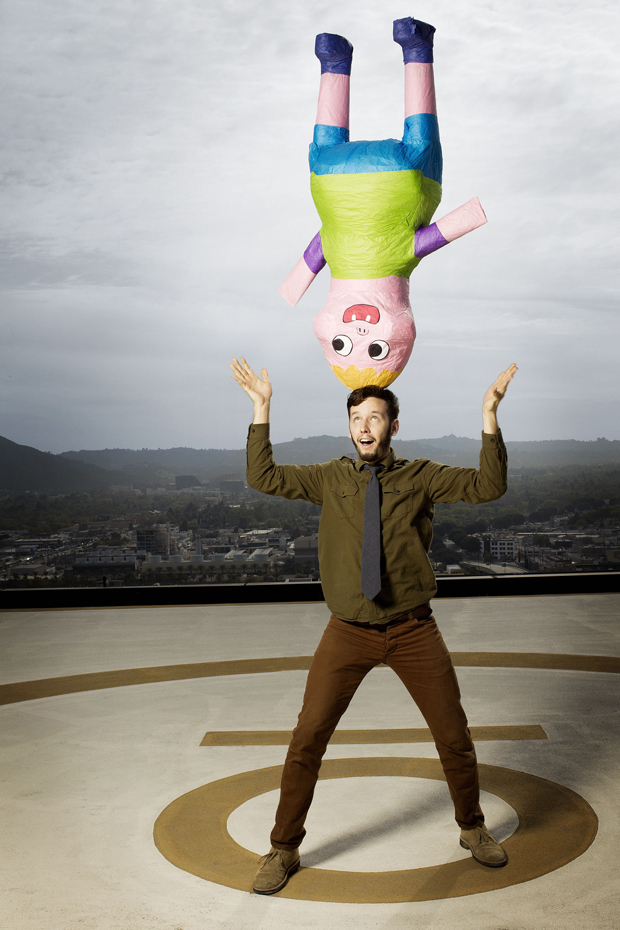