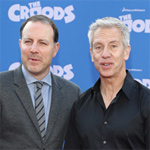 The opening night party for the World Animation & VFX Summit not only offered industry professionals from around the globe the chance to meet, reconnect and swap stories against the backdrop of the beautiful Pacific Ocean: it also served as an awards ceremony honoring major contributors to our favorite artform. In addition to honorees Stoopid Buddy Stoodios (Breakout Studio), Tapaas Chakravarti, John Knoll and June Foray (Lifetime Achievement), two of our favorite directors of the year took home the Original Vision Award for their creative storytelling and artistic approach to DreamWorks’ The Croods: Chris Sanders and Kirk DeMicco.

To celebrate (and learn more about their creative process), here is a Q&A with the talented twosome, part of which appears in our December Oscar Preview issue:

Animag: What was the key moment of inspiration for the movie?

Kirk DeMicco: Well, seeing that The Croods started in 2004 when John Cleese and I began writing it for Aardman and DreamWorks, i’d have to say that there have been a few different “moments of inspiration” along the way, but I think the moment that most informed the finished film was when Chris and I decided that Grug was going to use his brute strength to throw his family to safety at the end of the film. We wanted to say that while change is good and inevitable, there are somethings that should never change — like a father’s love for his family. You can’t improve on that love, it doesn’t need to change or be modernized. It is perfect, and that’s what Eep comes to realize.

Chris Sanders: A key moment of inspiration for The Croods would be the day Kirk and I visited the American Museum of Natural History in New York. We were in the city on a mission to find voices for the film, and had a little time to kill, so we dropped by the Early Man section of the museum. We were passing through an exhibit of meteorites when we heard a great commotion ahead of us. Rounding the bend, we came to the gallery we had been looking for — there was case upon case of skeletons, plaster castings of foot prints and detailed reconstructions of early humans. There was a group of school children on a field trip packed around a model of Lucy: Australopithecus afarensis. The kids were positively glued to that case — and every other case in the hall. Kirk and I ended up staring into those displays for quite a while as well. We were all feeling the same thing — a magnetic draw that those creatures exude. Everyone loves cavemen. Kirk and I vowed at that moment never to underestimate the universal attraction they have.

What was the toughest part of making the movie?

DeMicco: Finding the world. The Croods‘ universe is one completely created from the minds of the artists here at DWA. We couldn’t take a reference trip to prehistory. Not even Jeffrey [Katzenberg] has a time machine… yet. Anyway, creating a world set in a fictional prehistory meant we could do ANYTHING we wanted, and the tough part with a completely blank canvas is figuring out where to start. It took a long time to find the tone of that world. But our artists manage to build a world that was both wondrous but grounded enough so we could feel there were stakes.

Sanders: It was by far the building of their world. Even the interiors were exteriors — all natural shapes. The amount of surfaces was staggering, and we owe a great debt to the surfacers and matte painters, who are in a lot of ways the unsung heroes of the production.

How did you get into animation?

DeMicco: I was working at Warner Bros. as a screenwriter on live-action films when they asked me to do some rewrites on their first animated feature, Quest for Camelot. That project introduced me to the storyboard process and working with story artists. It’s a process I loved from the start, and still do.

Sanders: I got into animation because of my grandmother. As I was nearing graduation from high school in Colorado, I hadn’t thought much as to what I wanted to do with myself afterward, and hadn’t imagined that there was any possible future for me that would include drawing and making movies, which my friends and I did with our super-8 cameras pretty much non-stop through the winter and summers. My friend even converted one room in his house into a miniature sound stage where he built a reproduction of the bridge of the Starship Enterprise. I, in turn, persuaded him to do an action sequence in my own movie where he’d release the brake of his Volkswagon and chase it down a hill where he’d jump in the open door and pull the emergency brake before hitting me and my camera. We did that twice so I could have it from different angles. We then made the mistake of showing that footage to his parents.

Anyway, one night my grandmother read an article in the Denver Post about an animation school in Southern California, CalArts, that was teaching kids to be animators with an eye toward replacing the dwindling population of artists at Disney Studios. She changed everything by cutting out that article and later driving me to California to visit the school. CalArts was the one and only college I applied to. I was accepted, by the way, and spent four very fulfilling years there.

What is the best filmmaking advice anyone ever gave you?

DeMicco: “Know your theme.” It’s the lens through which you make all decisions on the film.

Sanders: The best filmmaking advice I ever received was from Alan Silvestri, during the making of Lilo & Stitch. Dean [DeBlois] and I were reviewing the story reels with Alan, which is one of the earliest steps in the scoring of the movie. At this point we are just discussing the style and placement of music throughout the film. Alan was very complimentary of the story, but had one question: he had somehow missed the moment when Stitch made the change from bad to good? Dean and I confessed that we hadn’t actually placed a shot in the reel for that particular change in character, as we weren’t sure how to accomplish it. We had tried to show a change in Stitch’s nature through dialogue and/or actions, but came up feeling mightily unsatisfied or uncomfortable with the results. It was too profound a moment to satisfyingly capture in the story reels, so we had opted to let it happen off-screen.

Alan said, “Put it on screen and I’ll do it.” Turns out, Dean and I had been so engrossed in our storyboards and script, we had completely forgotten the most powerful storytelling tool of all: music. I’ve never forgotten that advice — music does the heaviest lifting in a story. And it is almost unassailable, accomplishing turns in a story with a power so universal and profound it might as well be magic. 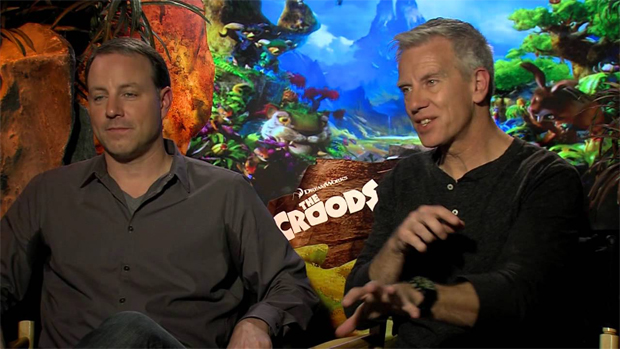