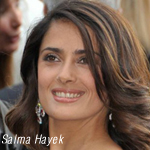 Award-winning actress Salma Hayek and her company Ventanarosa Productions are reportedly joining a project to make an animated feature based on the classic poetry collection, The Prophet, by Kahlil Gibran.

The project is being produced by Clark Peterson and Ron Senkowski, with Hayek’s producing partner Jose Tamez and co-financier Steve Hanson serving as executive producers.

The producers are in discussions with additional filmmakers and with private equity financiers to complete the financing of the film.

The Prophet is one of the bestselling books of all time, having sold more than 100 million copies since its original publication in 1923. Gibran, a Lebanese-American, is the third most-read poet in history, after Shakespeare and Lao-Tzu, and has been translated in to more than 40 languages.

The rights were obtained by a group led by Hanson in an agreement with the Gibran National Commmittee in B’Sharre, Lebanon, the representative of Gibran’s estate.