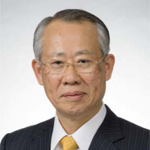 Former Mitsubishi executive Ryoichi Ueda has assumed the post of President of national pubcaster NHK (Japan Broadcasting Corporation). He is taking over for Katsuto Momii, whose three-year term ended this week.

NHK offers a variety of programming, including anime. The channel has debuted popular series like Bakuman, Cardcaptor Sakura, Nadia: The Secret of Blue Water and Princess Nine. It is currently home to long-running kids’ anime Nintama Rantaro and Ojarumaru.

“As president, I will devote constant attention to the fair and efficient management of public broadcasting; am firmly resolved to protect autonomy and independence and furnish public broadcasts which all of our viewers and listeners will trust”, Ueda told a press conference at NHK’s headquarters. “Further, in this globalized world, the public broadcaster also has the great mission of displaying Japan’s presence in the world. NHK has declared in its corporate plan that it will provide broadcasts and services of the very highest quality in 2020, the year of the Tokyo Olympic and Paralympic Games.”

Ueda, age 67, was previously a member of the NHK Audit Committee as well as its Board of Governors, joining following his resignation from major Japanese trading company Mitsubishi Corporation in 2013. He joined Mitsubishi Corp. in 1973, and during his career held the position of EVP for the Americas and later Senior EVP of the company.

Born in Nagasaki, Ueda earned a BA from Hitotsubashi University’s Faculty of Law in Tokyo and later an MBA from INSEAD in Fontainebleau, France.