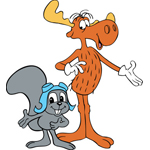 Alex Anderson Jr., creator of such iconic characters as Dudley Do-Right and Rocky & Bullwinkle, died Friday in Carmel, Calif. He was 90.

Born in Berkeley, Calif., in 1920, Anderson had cartoons in his blood as the nephew of Terrytoons chief Paul Terry. After serving in World War II, Alexander went to work for his uncle at Terrytoons and proposed the idea in the late 1940s of doing a project similar to a comic strip for the then-new market of TV. When his uncle passed on it, he took it to his childhood friend Jay Ward and together they produced the idea as Crusader Rabbit, a series of shorts that ran on NBC and in syndication.

After that series was not renewed, Anderson came up with Rocky & Bullwinkle as part of a larger concept for a multi-segment animated show that would parody current TV series. But Anderson didn’t want to move to Los Angeles, and so declined to be involved in production of the series. Anderson signed on as a consultant to get the deal done, then Ward headed to Hollywood and produced the classic show that gave the world moose and squirrel.

Anderson later filed a lawsuit against Jay Ward Productions over the characters, which Ward had copyrighted in his name alone. The case settled and Anderson is credited as the creator of the characters.

In addition to working in animation, Anderson worked in advertising on campaigns for such major American brands as Skippy peanut butter and Smucker’s.

You may also like...
Related Topics:Anderson, Creator, Dies, Rocky & Bullwinkle