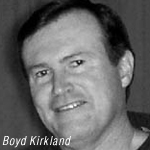 Boyd Kirkland, a prolific director of animated shows including Batman: The Animated Series and X-Men: Evolution, died Friday while awaiting a lung transplant, according to a post on The Animation Guild’s blog.

Kirkland was born in Utah in 1950 and graduated from Webet State College. He began his animation career in 1979 as a layout artist on the Hanna-Barbera series Jana of the Jungle and Scooby’s Laff-a-Lympics. As a layout artist, he worked on many of the most population action-adventure animated series of the early 1980s, including Thundarr the Barbarian, Spider-Man and his Amazing Friends, Mister T and G.I. Joe.

In the late 1980s, in addition to continuing to work on various series, he was a story artist on a number of animated short films about the Mormon faith. Kirkland researched and wrote a number of articles about Mormon teachings and doctrine for Mormon magazines.

In the 1990s, he became a producer on the animated series Attack of the Killer Tomatoes and Bucky O’Hare and the Toad Wars before moving on to Batman: The Animated Series, on which he was a writer, producer and director.

He also co-directed the 2009 direct-to-video feature Happily N’Ever After 2.

The TAG blog reports services are scheduled for tomorrow, Feb. 1, at the LDS Church Building in Canyon Country, Calif. A viewing is set for 10-11 a.m., with a ceremony to follow from 11 a.m. to noon.