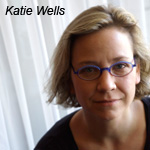 Wells will manage the company’s ongoing expansion and work closely with visual effects supervisors and producers, as well as commercial clients. Her work will involve tailoring Proof’s services to define and enhance creative content, define the technical needs of highly complex live-action sequences, and create efficiencies in the application of production and post-production resources.

Wells began her career in commercials, landing a job at Ridley Scott Associates and working as a line producer and unit production manager for such top directors as Ridley Scott, Joe Pytka, David Fincher, David Lynch and Jake Scott. She subsequently worked on staff at Propaganda Films, managing a roster that included David Kellogg, Michael Bay, and Anthony Hoffman.

Recruited by Digital Domain, Wells became its head of commercial production, moving from live-action to animation and visual effects. After leaving Digital Domain, Katie established a reputation as a business performance specialist, working as an executive for live-action and visual effects companies undergoing expansions or turnarounds and helping to maximize their potential. She served as executive producer and managing director for Backyard Productions, 525 Studios, and CREO.

Wells also was executive producer for the Quebec based FX Cartel, helping productions use tax-credit strategies to package individual and boutique vendors and managing the combined entities to deliver VFX for films including Stay, Cursed, Across the Universe, Mr. Magorium’s Wonder Emporium and Bolden. She has also worked as a consulting visual effects producer for films such as Immortals, the upcoming Riddick 3, and as a 3D production consultant on Smurfs.

“Her deep understanding of the A-Z process of visual effects and pre-vis, combined with her live-action experience, will be invaluable to Proof as technologies continue to blur the lines between production and postproduction,” says Ron Frankel, Proof ‘s founder and creative director.