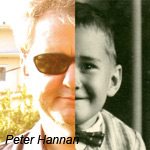 It’s always cause for celebration when one of our favorite animation creators has a new show out. This week, CatDog creator Peter Hannan launched his new toon called Really Freaking Embarrassing on SMOSH’s Shut Up! Cartoons YouTube channel. We caught up with the talented writer/director/animator/musician/jack-of-all-trades to get the details about his latest adventure:

Animag: So please tell us about your new show and how it all came about?

Peter Hannan: I started developing it last winter. I heard about Shut Up! Cartoons through the grapevine. I called my agent, had a meeting with Barry Blumberg–who I knew from his time at Disney. I’d made an animated pilot called “Wanda West”—about a girl living like Annie Oakley in present day…cursin’, spittin’, ridin’ her pet goat to school—during his tenure. But anyway, it was fun to think about an older, snarkier audience. I brought him a couple of ideas. One was “Really Freaking Embarrassing” Catchphrase: True Stories. Real People. Total Humiliation.” He said yes.

It started as a man-on-the-street thing and some of the stories came to me that way. I also approached friends to see if they had any deeply humiliating experiences they wanted to share. And they did. The actor Andre Royo (who play “Bubbles” on “The Wire”) tells the story of his first sexual experience. Hilarious. One story came from an animation writer friend, another from an old friend from Chicago. His story, called “Tilt-a-Hurl!” is something I actually witnessed, so I’m in it as a secondary character. The kids in that episode are his daughter and my son. Then, there were some people with great stories who were too shy to actually speak them into a microphone. I enlisted the help of Maria Bamford (comedian and voice artist) to voice one woman’s skinny-dipping nightmare. Jill Talley (Mr. Show) voiced another. Jill and husband Tom Kenny (SpongeBob, CatDog, and obviously many more) did lots of secondary voices. I did a lot of other voices and contributed a horribly embarrassing story of my own. Dru Hardy, my wife, also did secondary voices. So it was kind of a friends, family, acquaintance, total stranger affair. I mostly just traveled around L.A., recording people on the street and in their houses, collecting rude and crude tales of embarrassment. 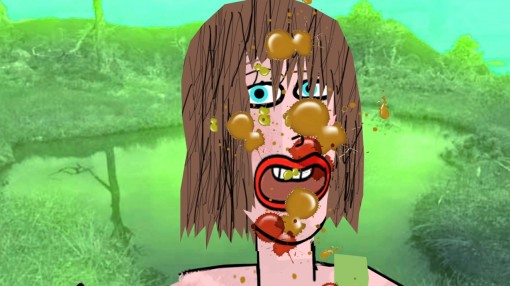 Where is the animation done? What’s the process like?

Hannan: The animation is being done at the end of my fingertips. It’s all just an unholy amalgam of drawing, Photoshop, After Effects, Final Cut, photography, and video. I also used the iPad app called Brushes (it’s the program my friend Jorge Colombo uses to do New Yorker covers, so I was inspired by him), which can play back actions created while drawing. So I made lots of little Quicktime movies that way that were added to the mix. I was going to use—what do you call it?—oh, yeah, a crew, but I realized when I started getting into it, that I wasn’t even sure what I wanted it to be exactly, so I pretty much decided to do almost everything everything myself. It’s super down and dirty. Nick Jennings (art director on CatDog, SpongeBob, now Adventure Time) helped out. He got a Resident Genius credit. So did Dru. I also wrote the theme song (if you can call it writing…it only has four words) and performed it with Dru. I used some music library stuff, but did most cues myself on ukulele and guitar. 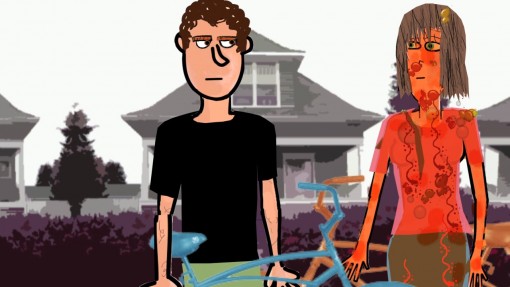 What do you love about the new show?

Hannan: I love how rough and raw it is. I used to work as an illustrator, cartoonist, art director for magazines and newspapers, and this felt a bit like that…decision-making at hyper-speed. Need a background? How about that storefront? Or that dumpster? Most of the backgrounds are photos I took with my phone. These are true stories, so, except for me and the street kids who repeatedly berate me in the opening sequence, there aren’t recurring characters. So there were a ton of new characters in each episode that needed to be drawn. I drew some by hand, some on my iPad, some on the computer. I like imperfect art. I loved not caring about everything looking perfect and moving smoothly. I tend to like rough drawings better than final ones anyway. In Really Freaking Embarrassing, the roughs are the finals. 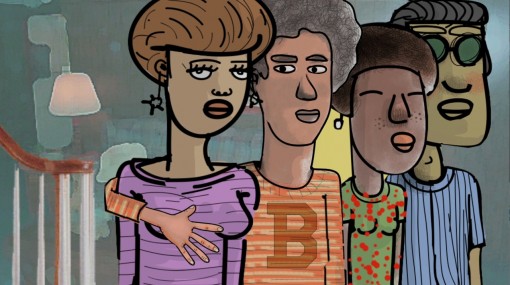 What is the toughest part of the job?

Hannan: It was just a lot of work. I had some other projects going simultaneously. I’m writing and illustrating a new middle-grade humorous book for Scholastic. I also wrote two pretty crazy adult novels in the past year, under a pseudonym (which I cannot divulge. Really. Contractually.), and a couple of other things. So I’ve been immersed in several distinctly different sensibilities…sort of weird parallel worlds. I love that…creating material for wildly divergent audiences.

Hannan: There are ten episodes and they are very short…3 ½  to 5 minutes long. 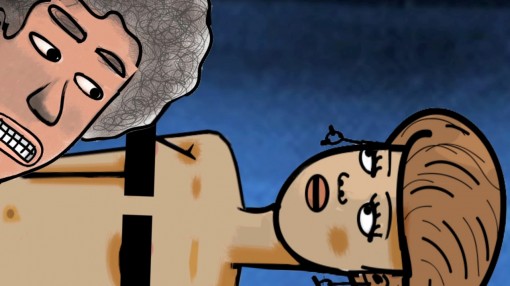 What’s your take on the whole doing-animation-for-the-web business model?

Hannan: I love it. I mean, I don’t know a lot about creating stuff for the Internet, really. The Smosh guys, Ian and Anthony, do. They bring a big audience along to Shut Up! Cartoons. This is the first show I’ve done for the web, but I think it’s a good time to do it, since all media seems to finally be having the urge to merge. In the early 2000s, I was taking meetings all over town with people who were super giddy about the web boom…that it was just like the early days of Hollywood, and all that. And then—well, you know what happened then—the boom went bust. Slightly used Aeron chairs were suddenly so much more affordable! But everyone knew it would happen eventually and apparently, eventually is now. 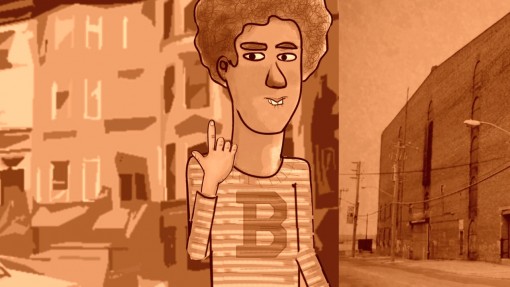 We, at Animag, are still crazy about CatDog…why do you think fans will never stop caring about your show?

Hannan: Oh, thanks. I appreciate that. I don’t know. I know I’ll always love that time. And that crew. And that idea. And believe, me, the song will always be stuck in my head. I wrote and recorded the rough version in my basement in Chicago about fifteen years ago and I don’t think a day goes by that it doesn’t run through my head at some point. It’s an illness, really. I might have to become a patient of Oliver Sacks to dislodge it.

Hannan: I like it all. I also paint and occasionally show my work. At some point I want to just make art crazy multimedia art shows using all this stuff. 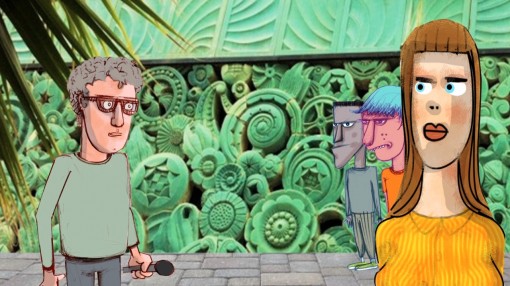 What kind of advice would you give animation creative types who want to break into the business?

Hannan:  Well, going to one of a couple handfuls of schools—CalArts, RISD, SVA, USC, Ringling, etc—is probably as close as you’re going to get to a sure-fire path to animation. I got in through the backdoor…through my work in books, single-panel cartoons, and illustration. My trajectory has been linked more to my wacky ideas and life experience, so there’s no one way. Mainly draw, write, read, watch movies…fill up on stuff. And honor your personal interests. The unique amalgamation that is you is what sets you apart. It’s not a coincidence that Steve Hillenburg [creator of Spongebob] studied oceanography and animation.

Do you think it’s tougher now to make it in animation than say 15 years ago?

It’s just different. The traditional model is probably tougher. But, on the other hand, now it’s possible to bypass the normal studio route and still make a splash. 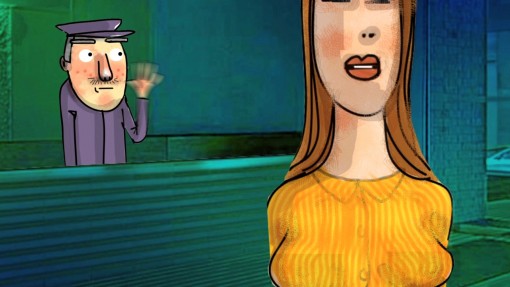 In another life I helped run a repertory movie house in Chicago and if there’s one thing movie lovers like to do it’s make lists, so this is a can of worms we shouldn’t open. But things I will always watch: Chaplin, Keaton, Laurel and Hardy, Touch of Evil, Dr. Strangelove, Once Upon a Time in the West, Out of the Past, Strangers on a Train, His Girl Friday, Rear Window, Gun Crazy, Sunrise, The Girl Can’t Help It, The Godfather, Some Like it Hot, Sunset Blvd, The Apartment, Raging Bull, Take the Money and Run, The American Friend, Aguirre Wrath of God, The Wizard of Oz, Dr. Strangelove, In a Lonely Place, Bonnie and Clyde, Chinatown. Relatively recent comedies: Flirting with Disaster, The Big Lebowski, Office Space, and Election. This year so far I think my favorite movies are Beasts of the Southern Wild and Beauty is Embarrassing.

TV: I love old comedies, like Car 54, Where are You?, The Honeymooners, stuff like that. Louie is my favorite current comedy. Also Daily Show and Colbert. I love Curb Your Enthusiasm. I recently went back and watched all of The Wire, which is incredibly good. I confess I don’t watch TV animation very much, but I like a lot of it, like SpongeBob, Adventure Time and The Regular Show. 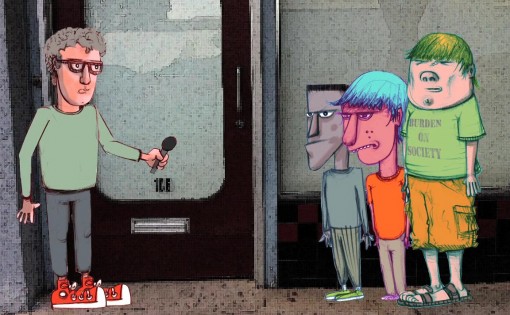 When did you know you wanted to create cartoons?

I’ve dreamed about it since I was little kid. But I had a lot of dreams and it took a while to get around to that one.

You can check out a new episode of Peter’s new show every Wednesday here:

And find out about all his amazing activities at www.peterhannan.com. 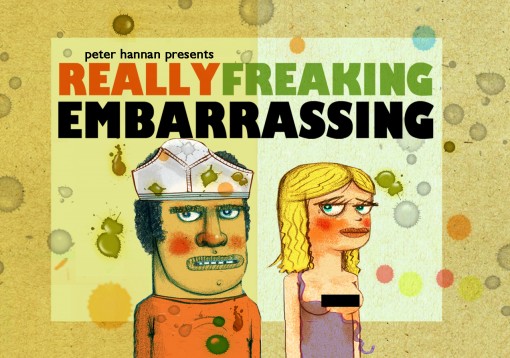