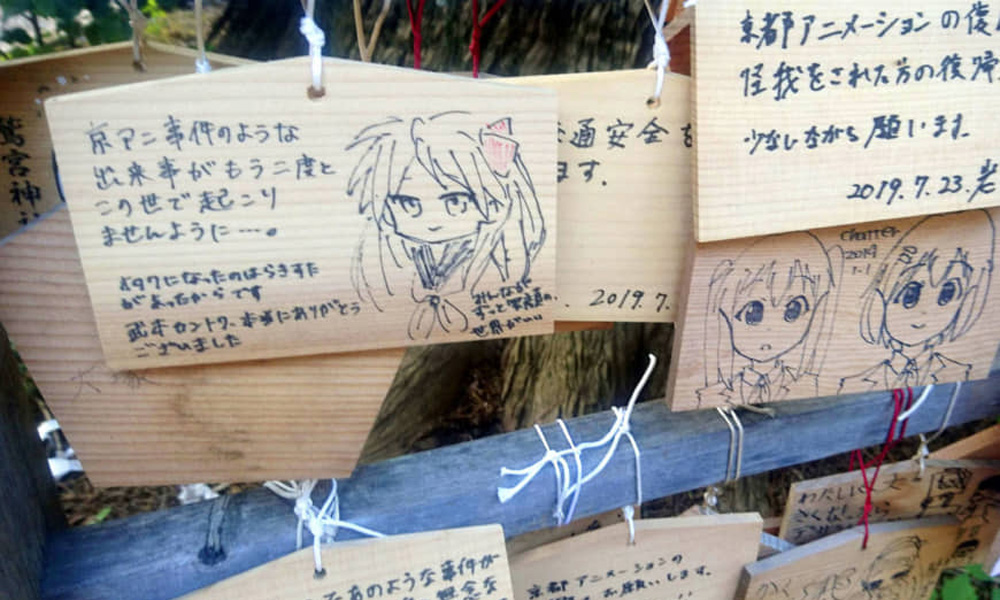 Kyoto Prefectural Police Headquarters has made public the names of 10 of the 35 victims who were killed in the arson attack on Kyoto Animation studio on July 18. All of the deceased have been identified, but names are being withheld pending consent of the victims’ families. The announcement was made by chief investigator Ryoji Nishiyama, who told reporters Friday that the families are in deep shock, and that the studio has been opposed to releasing the victims’ names.

Outside the police conference, the family of Naomi Ishida disclosed her death.

Over the weekend, fans began setting up and visiting memorials at “holy sites” — real-world locations featured in KyoAni’s works, such as the area of Kishihara (reflected in Beyond the Boundary), Kyoto’s Demachimasugata shopping street (Tamako Market) and Washinomiya Shrine in Kuki (Lucky Star).

Joining the outpouring of financial support from fans and colleagues around the world, rock band X Japan frontman Yoshiki has donated 10 million yen (about $94,000 USD) to the dedicated victims and survivors support fund, through his own Yoshiki Foundation America charity branch. Yoshiki, who travels to many anim/Japanese pop culture conventions around the world with X Japan, posted to Twitter:

“I am in the United States and I learned about the Kyoto Animation fire on the local news. My heart aches. Japanese anime, and each one of those creators, is a treasure of the world. I hope they recover as soon as possible. I’m always doing tours around the world. No matter where I go, animation fans come to my concerts and support my global activities. I’m always grateful to them. And I always want to contribute to the development of Japan’s anime culture, which I consider one of the world’s treasures. I truly share the pain of those who lost their families. I really hope this will assist the bereaved, and also hope that the circle of support around them will expand.”

Fans in North America can contribute to the Help KyoAni Heal GoFundMe campaign organized by Sentai Filmworks. The campaign has raised $2.3 million in just over two weeks.