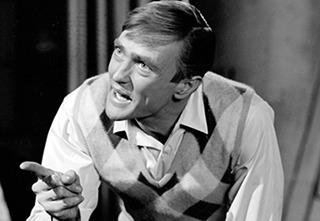 Jered Barclay (pictured center in 'Alfred Hitchcock Presents') provided voices for '80s toons including 'The Transformers,' 'The Dukes,' 'The Smurfs' and "Trollkins'

Twentieth century stage and screen actor Jered Barclay, who provided voices for popular animated series of the 1980s, died July 23 in North Hollywood at age 91 from MDS leukemia. News of his passing was shared by Barclay’s longtime friend, Myra Turley. 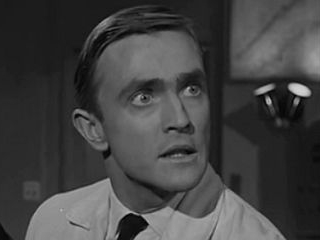 Jered “Jerry” Barclay in ‘War of the Satellites’

Barclay got a very early start in his entertainment career. Born November 22, 1930 in Seattle, he sstarted on the vaudeville stage at just three years old, performing with stars like Shirley Temple, Judy Garland and Sammy Davis Jr. By age six he was working in radio, and by age 12 he was travelling with the circus.

Often billed as “Jerry Barclay,” he started his screen career in the 1950s, with an uncredited role in The Man with the Golden Arm (1955) and guest spots on Alfred Hitchcock Presents, Cheyenne. He appeared in Roger Corman’s War of the Satellites and a number of 1960s Western TV series before relocating to New York for stage work. He went on to direct and choreograph Sextet (1974) for Broadway, Rosebloom and Scandalous Memories. Barclay voiced the villain Dr. Gregory Swofford in ‘The Transformers’

In the 1980s, after four decades in showbiz, Barclay began a new phase as a voice actor for animation. He delivered performances for cartoons like Scooby-Doo and Scrappy-Doo, Trollkins, The Little Rascals, Richie Rich, Foofur, The Dukes and Paddington Bear, and tackled multiple roles for the hit series The Smurfs and The Transformers — including Cerebros, Dr. Swofford and Sinnertwin.

During the ’80s, Barclay also began working as an acting coach, working with many stars he met in the theater, including Liza Minelli, Rue McClanahan, Lily Tomlin, Patrick Swayze, Josh Brolin and Johnny Depp. While he continued to take some film and TV roles into the early 1990s, by the middle of the decade he decided to swtich up his career again, this time becoming an international photojournalist. Travelling to 108 countries across all seven continents, Barclay was notably the only Western journalist invited to cover the royal wedding of Bhutan’s King Jigme Khesar Namgyel Wangchuk and Queen Jetsun Pema in 2011.