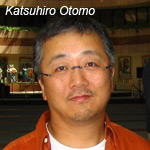 Killer news for anime fans: Katsuhiro Otomo, the legendary director of Akira (for which he also wrote and illustrated the original manga), is set to make his first U.S. public appearance since 1990 at the Platform International Animation Festival, where he will be presented with a Lifetime Achievement Award on Saturday, October 27 at 9:30 p.m. The evening will begin with an exclusive screening of Otomo’s new short film Combustible, followed by a discussion with animation historian Jerry Beck, and then the award ceremony.

“It is an incredibly great honor for PLATFORM to welcome Katsuhiro Otomo to the United States after so many years absence,” said Festival Director Irene Kotlarz. “We are delighted to present him with our first Lifetime Achievement Award in honor of his unique and original contribution to the art of animation. In recognizing an artist whose origins are deeply rooted in manga, PLATFORM continues its polemical mission to break boundaries into other art forms and embrace a concept of animation that represents the widest possible range of influences.”

Katsuhiro Otomo is internationally recognized as one of the leading creative forces in Japanese anime and manga, as well as a huge influence on modern day Hollywood filmmakers like Sam Raimi, Chris Nolan and the Wachowskis. Otomo began his career writing and drawing manga in thes 1970s before beginning his animation career as a character designer in the early ’80s. His Akira manga was published from 1982-88 and then adapted as a feature in ’88, which Otomo wrote and directed. The Akira film became a game-changer for Japanese animation and has become a classic example of the art form and the science-fiction genre.

Several of Otomo’s short films can be seen in the compilation features Robot Carnival and Neo-Tokyo. He wrote the screenplay for Osamu Tezuka’s 2001 animated version of Metropolis, and directed several live-action movies. While continuing to work in comics, he went on to direct the animated features Memories (1995), Steamboy (2004) and this year’s short Combustible–which is set in 18th century Edo and explores a childhood friendship that has blossomed into a frowned-upon romance.

PLATFORM, which is put on by CalArts and the Roy and Edna Disney/CalArts Theater (REDCAT) will take place Oct. 26-28 in Los Angeles. Visit www.redcat.org for tickets and platformfestival.com for more information.