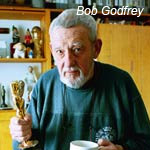 We were saddened to hear of the passing of influential British animator Bob Godfrey on Friday (Feb. 22). The 91-year-old animator was best known for creating the  popular animated series Roobarb (with writer George Calveley) and for award-winning shorts such as Kama Sutra Rides Again (1972) and Great (1975).

Born in Australia and educated in the U.K., Godfrey was known as “The Godfather of British Animation”. He began his career as a graphic artist in London in the 1930s before gaining work in the film industry.

Filmmaker Stanley Kubrick admired his short Kama Sutra Rides Again so much that he screened it with A Clockwork Orange in U.K. theaters. Godfrey also worked with Monty Python’s Terry Gilliam, and made fun of orthodoxy and the hypocrisy of the ruling class and common morality. He retired in 1999.

In addition to Roobarb, which centered on the adventures of an inventive purple dog and a green cat, Godfrey was well known for a wide range of animated children’s shows, including Henry’s Cat (1983-84). His death came only a few days after the death of veteran actor Richard Briers at 79, who narrated Roobarb and also voiced Brunel in Godfrey’s Great.

In a 2001 interview to The Guardian, Godfrey said he regretted that he hadn’t been able to work on a feature-length movie.

“I’d love to have done a full-length feature but I can’t seem to stretch myself to that length,” he said. “When you look at my films, they appear to be a series of 30-second commercials cut together. I’m a short- distance man whether I like it or not.”

“Dear old Bob Godfrey is no more,” tweeted Aardman founder Peter Lord on Friday. “A great influence and inspiration to me and my generation of animators. Also a lovely bloke.”