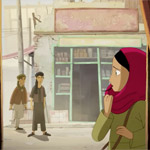 A first round of film programming picks for the 2017 Toronto International Film Festival was announced during a live-streamed press conference Tuesday, with Cartoon Saloon’s upcoming third feature The Breadwinner set to be the animated standout amidst the 14 Galas and 33 Special Presentations. The film will make its World Premiere at TIFF, which runs this year from September 7-17.

Directed by Nora Twomey (co-director, The Secret of Kells), The Breadwinner centers on a young girl named Parvana, living under the Taliban regime, who cuts her hair and disguises herself as a boy in order to provide for her family after her father is imprisoned. The empowering tale is adapted from the young adult novel by Canadian author Deborah Ellis, and adapted by Anita Doron.

An Ireland-Canada-Luxembourg co-production, The Breadwinneris being produced with the participation of Telefilm Canada & The Film Fund, the Irish Film Board, Film Fund Luxembourg, The Harold Greenberg Fund, Shaw Rocket Fund, the Ontario Media Development Corporation and the Broadcasting Authority of Ireland along with Gaia Entertainment and the Artemis Rising Foundation.

See the initial batch of films announced for TIFF here.