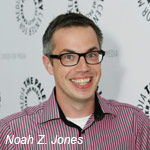 We recently had the good fortune of catching up with the talented and super nice Noah Z. Jones, the creator of Disney Channel’s hit animated series Fish Hooks. The colorful show, which will begin its second season on Friday (Nov. 4) at 9:30 p.m, will continue to follow the adventures of best fish friends Bea, Milo and Oscar as they tackle everyday tween life and navigate tricky situations like dealing with giant lobsters, babysitting an ornery catfish and learning to ride a bucking scorpion.

Animag: We hope you can tell us a bit about the second season of your show. How is different from your freshman year?

I think we’ve really hit our stride, we know what works for the show. During the first year, you’re trying to figure things out and need to find out how to balance the different ingredients of the show. Now, I think the sense of humor, the tone has been been really crystalized. The animation studio we’re using in Ottawa, Mercury Filmworks, has been really fantastic and do amazing work. They use Toon Boom’s Harmony to deliver the animation.

When we last spoke to you, the show was just about to launch on Disney Channel. Since you came to the show from the world of children’s books, how did it change your life?

Jones: It’s funny. I really can’t believe it’s been a year. The show has surpassed all my expectations. I think we are doing solid, funny work.  It’s amazing. I meet kids and when they find out what I do for a living, their heads explode. I always wanted the show to resonate with kids and for people to care about the characters. It’s also been great to have the show on Disney. They really know how to launch a show. They have it down!

Then there’s the whole perk of getting to witness the voice cast at the recording sessions. We have all these great personalities with these crazy voices acting off of each other, bouncing jokes…it’s really fun to see. Then, Comic-Con this past summer was amazing. I’d never gone before, and we had a lot of fun, filling up a 3500-room for the panel. It was so nice to get that love from the public, because we all go to work in this non-descript building in Glendale. So you are really working in isolation, until you get that kind of reaction from the viewers. 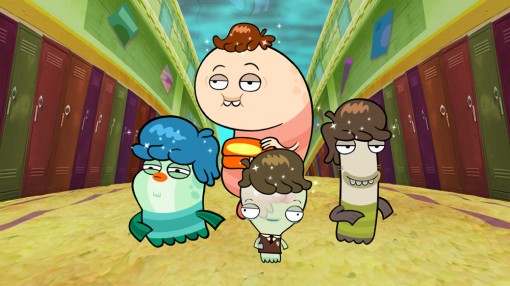 You recently moved out of  the Burbank studio?

Jones: Yes, we are in Glendale, only a few miles away from where we used to be. We’re in the same building as Tron: Uprising, Gravity Falls and Phineas and Ferb. If feels like a college for artists, it’s a really tight animation community. We’re also next to the Disney Toon Studios, the folks who do the direct-to-DVD projects like the Tinker Bell movies and the Planes videos.

What are some of the lessons that you’ve learned this past year about producing an effective animated series?

Jones: One thing we learned is that to get the story to work you have to really be clear about each character’s story. Then once you know that, you can layer on top of it. But if you start with a wacky premise that doesn’t connect to anyone else, it will be less watchable. We have a more streamlined, collaborative way of working that allows the board artists to be involved from the very beginning. When storyboard artists are actively involved from the beginning, they’re more invested in the story and know which ideas were tossed around and are aware of the missteps that we could have taken. Each episode takes about six to eight months to produce, but at any time, we have 15 episodes or so at various stages of completion. It’s surprising to see a finished episode, because it seems we just worked on it. 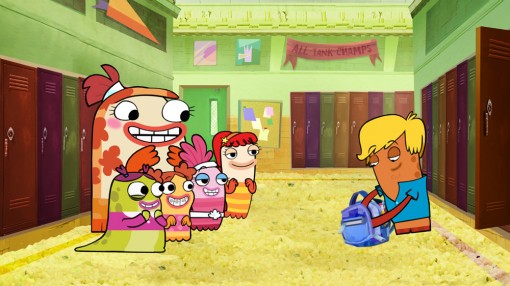 Can we notice any changes between the first and second season of the show? Do you have any favorite episodes?

Jones: The characters are a bit looser than the first season. There are more wacky pushed poses. We send the fish to different parts of the pet store, and we actually get to see outside the store in one episodes.  I think our Christmas episode is going to be amazing. I also love the first episode of the season, where Bea is shooting a commercial and has to learn how to ride a scorpion. The animation is great and sets up the second season. There’s also the talent show episode in which fish get to dance on inflatable legs. I promise it makes sense when you see it!

So now, looking back, why do you think the show became a success?

Jones: Well, it’s different from other cartoons both tonally and visually. We are going to stay true to the kind of humor that we like, which seems to be connecting with the kids. The voice actors we have play a huge role in the success of the show. They are such a likeable lunch. In Season Two, we continue to build our supporting cast. For example, we have Jennifer Coolidge plays Ms. Lips, and every time she opens her mouth, it’s hysterical. 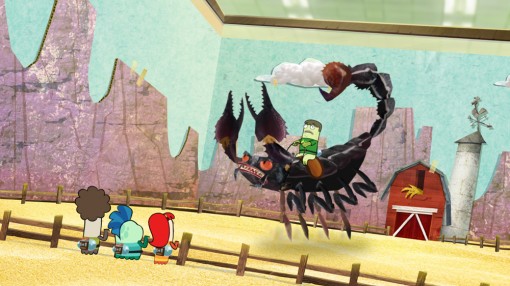 You must be one of the few people in children’s animation who have two shows in production at the same time. Your other series Almost Naked Animals is also attracting lots of attention on Cartoon Network and YTV in Canada. How does that experience compare with Fish Hooks?

Jones: I’m very pleased because it’s also doing well. 9 Story Entertainment is producing that show in Canada, and they’ve signed all kinds of licensing deals for the show. I couldn’t have imagined these characters having a life of their own like that. Of course, I am not as hands-on as Fish Hooks. I moved to Los Angeles, and they are producing the show. It’s fun to see how different they are and how they have both grown in their own way.

Are your kids old enough to enjoy the shows?

Jones: My son is four and my daughter is two-years-old, so my son kind of gets it. When I come home, my wife says they know that you are working at Disney. They also know that I draw fish for a living. I have to tell you that it’s been a wonderful experience. We are going to ride this out as long as can. We have voice actors who call our talent department and want to be on the show. We recently won an Environmental Award and they showed a clip of Fish Hooks, and Ozzy Osbourne and Justin Timberlake were there. It just made me so proud! As we joked at Comic-Con, we’ve got storylines planned out through Season 17. 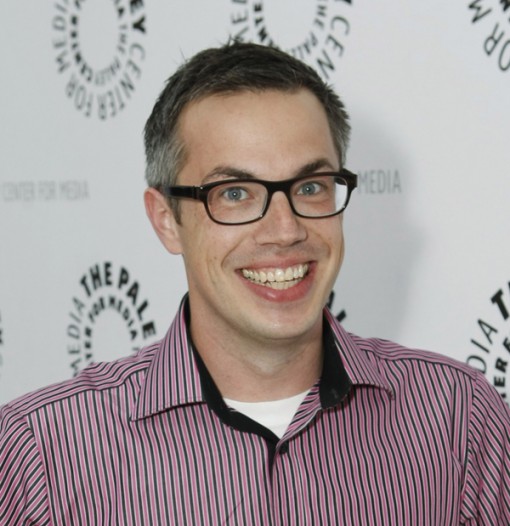 Created by Noah Z. Jones, Fish Hooks was developed for television by Alex Hirsch (Gravity Falls, The Marvelous Misadventures of Flapjack) and Bill Reiss (Chowder) and is executive-produced by Jones and Maxwell Atoms (The Grim Adventures of Billy & Mandy).  The new season premieres on Disney Channel on Friday (Nov. 4) at 9:30 p.m.