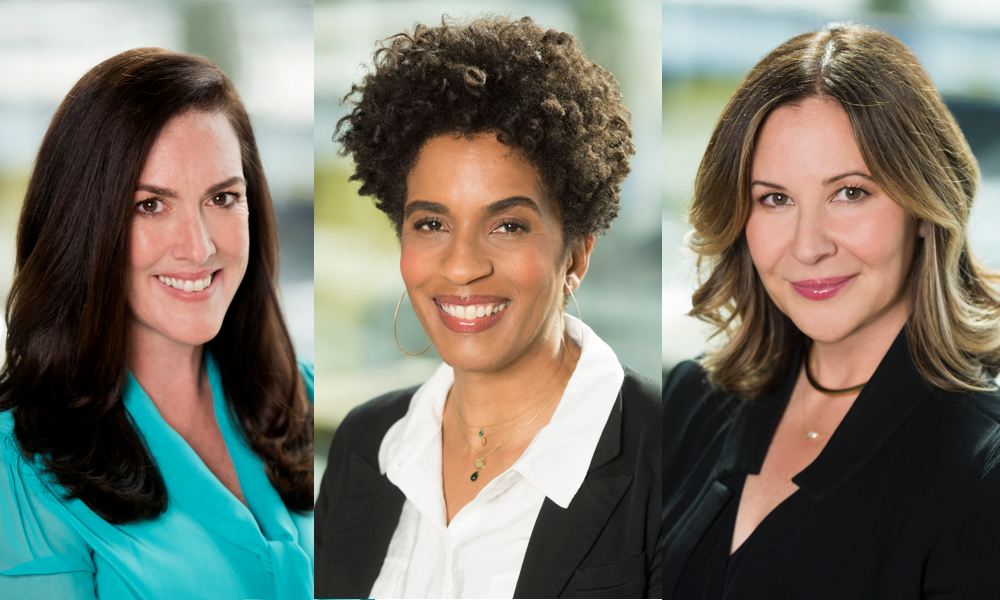 Nickelodeon has named three executives to newly created senior positions in its animation studio headquarters in Burbank, as the network continues to steadily increase its development and production slate. The new hires are:

The announcement was made today by Ramsey Naito, Executive Vice President of Nickelodeon Animation Studios, to whom they will report.

“Nickelodeon Animation is focused on three vital elements to drive our business forward — building the culture, developing talent and creating great animated content for kids and families everywhere — and Darlene, Liz and Camille are the perfect leaders to bring our creative-lead mission into the future,” said Naito.

In these newly created roles, Caamaño Loquet will oversee Nickelodeon’s movie business, building and managing a slate of content for features and SVOD services. Paulson will run animation casting and talent development for the animation studio, which will include development and current series productions, movies and short form content; and Eden will lead the recruitment for the animation studio, finding and placing new talent that will help develop a growing slate of series and feature productions.

Caamaño Loquet recently served as Vice President of Production at Fox Animation, where she brought in and packaged several projects including National Book Award winner The Girl Who Drank the Moon, the New York Times Bestselling trilogy Zita the Space Girl, as well as Eisner Award-winning graphic novel Nimona, currently in production at Blue Sky Studios, on which she also served as producer. Prior to joining Fox Animation, Caamaño Loquet served as President and COO of NALA Films, producing notable projects The Bling Ring; Decoding Deepak, Casa de Mi Padre, In the Valley of Elah and Dan in Real Life. Caamaño Loquet began her executive career at DreamWorks Animation / Patchwork Productions.

Paulson has spent the past 20 years in the field of casting, discovering emerging talent and aligning high-end talent in the television arena. Most recently, she served as Senior Vice President of Casting at 20th Century Fox Television, overseeing scripted and animation television projects, including American Horror Story, 9-1-1, Empire, Bob’s Burgers, Bless The Harts and Fresh off the Boat, among others. Paulson began her career in the commercial landscape and is a founding partner of Mel & Liz Casting, a commercial casting company that works with a variety of high-profile television and feature directors. In October 2015, Variety honored Paulson as one of Hollywood’s New Leaders.

Most recently, Eden oversaw the recruitment and outreach strategy at Walt Disney Animation Studios. Her credits include Frozen 2, Ralph Breaks the Internet, Moana, Zootopia, Big Hero 6, Frozen and Wreck-It Ralph. In 2004, Eden joined DreamWorks Animation on their first CG feature, Shark Tale. The following year, she transitioned from production to talent acquisitions/talent management working at Sony Pictures Imageworks recruiting for visual effects and animated features, as well as, spearheading efforts for satellite offices in Bristol, England, Albuquerque and Vancouver. In 2006, Eden joined Framestore, London to oversee recruitment for their first feature, The Tale of Despereaux, as well as The Quantum of Solace, The Golden Compass, Harry Potter and the Order of the Phoenix and Wanted.