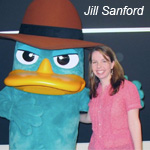 “Jill’s creative expertise and proven track record of overseeing animated hits makes her a terrific addition to the Nickelodeon animation team,” said Boyd. “Her keen eye for identifying unique ideas and talent will be a huge asset as we continue to grow our hit Nick animation brand.”

In her new role, Sanford will research and develop show ideas, will oversee scripts, creative, legal, casting and staffing for pilots. Additionally, she will help oversee the comedy shorts program and partner with our short form development team to find and shepherd the next generation of animated hits.

Prior to joining Nickelodeon, Sanford held several positions during her nine year tenure at The Walt Disney Company, where she most recently served as the director of original series for Disney Television Animation. She was the lead current series executive for Disney Channel’s animation series Phineas and Ferb, Fish Hooks and other projects in development. Prior to moving to Disney Television Animation in 2008, Sanford worked in both development and current series for live-action and animated series for Disney Channel.