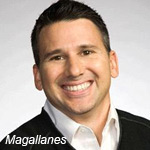 Rich Magallanes has been promoted to the job of senior VP of current series at Nickelodeon Animation.

Magallanes’ new job calls for him to oversee production as the executive in charge of the series Teenage Mutant Ninja Turtles, SpongeBob SquarePants, Kung Fu Panda: Legends of Awesomeness and The Penguins of Madagascar. He previously had been VP of animated current series.

A veteran of the studio, Magallanes will report to Nick Animation president Brown Johnson.

“During his 15 years with the company, his creative imprint has touched everything from SpongeBob SquarePants to Teenage Mutant Ninja Turtles,” said Johnson. “He embodies the perfect combination of creative chops and executive leadership necessary to drive our animation business forward.”

Magallanes began his career at Nickelodeon in 1997 as a freelance story consultant working on shows such as Rugrats, The Wild Thornberrys and Angry Beavers. He has also been instrumental in launching some of Nickelodeon’s biggest current animated hits, including SpongeBob SquarePants, The Fairly OddParents and The Penguins of Madagascar.

He also has managed the Nickelodeon Writing and Artist Fellowship Programs at the Burbank Animation Studios, which helps advance the careers of talented writers trying to break into the business. He also co-developed and managed the production of Nickelodeon’s highly-anticipated re-boot of the iconic Teenage Mutant Ninja Turtles franchise set to debut in 2012.

Prior to Nickelodeon, Magallanes worked in production on several motion picture and independent films, and as a staff news writer for KSDO AM 1130 in San Diego. He is a graduate of San Diego State University with a bachelor’s of arts degree in journalism.