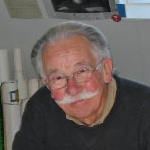 Dick Bruna, the Dutch children’s author and artist who created the internationally popular character Miffy the bunny, died Thursday, February 16 in his hometown of Utrecht, The Netherlands. He was 89 years old.

Over his six-decade career, Bruna wrote and illustrated 124 pictures books, including 32 featuring Miffy. The little bunny’s sweet-natured, everyday adventures were first published in 1955 and have since been translated into over 50 languages and sold more than 85 million copies worldwide. The character, known as Nijntje in Dutch, has a statue and public square named for her in Utrecht.

Born in 1927, Bruna began his career as a freelance graphic designer for the family publishing house run by his father, A.W. Bruna & Zoon. Reticent to follow in the same business, Bruna traveled to London and lived for a time in Paris, falling under the spell of pioneering 20th century painters like Picasso, Leger and Matisse. After a brief stint at the fine arts academy in Amsterdam, Bruna decided traditional painting was not for him.

Bruna first came up with Miffy (originally a little boy rabbit) in 1955, when he made up stories for his young son about a rabbit they had encountered during a family holiday. In addition to his prolific output of children’s picture books (also featuring characters Farmer John, Hettie the Hedgehog and Lottie), Bruna has undertaken design work for charities such UNICEF, World AIDS Day and Amnesty International; and illustrated over 2,000 book covers and over 100 posters for the family business.

Miffy has notably crossed into the world of animation, most recently in Miffy’s Adventures Big and Small — a CGI series from Blue-Zoo Animation and Mercis BV which premiered on Tiny Pop (UK) in 2015. The stop-motion series Miffy and Friends from Big Tent Ent. (2003-2007) also remains popular. The first Miffy the Movie debuted in the Netherlands in 2013, rolling out in key territories worldwide. Her first TV appearance was in the traditionally animated short-form Miffy series in the 1990s.

Bruna officially retired in 2014, having published his final Miffy book in 2011. In 2015, Utrecht’s Centraal Museum converted its Dick Bruna House (a recreation of his studio and retrospective of his work) into the kid-friendly Miffy Museum. Bruna was named the recipient to the triennially awarded Max Velthuijs Prize for illustration just last year. He is survived by his wife, three children and six grandchildren. 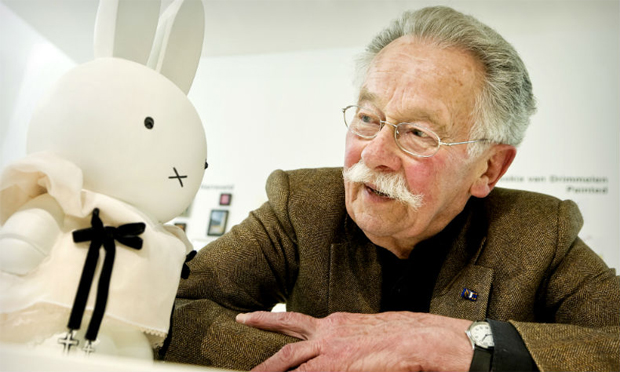