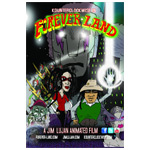 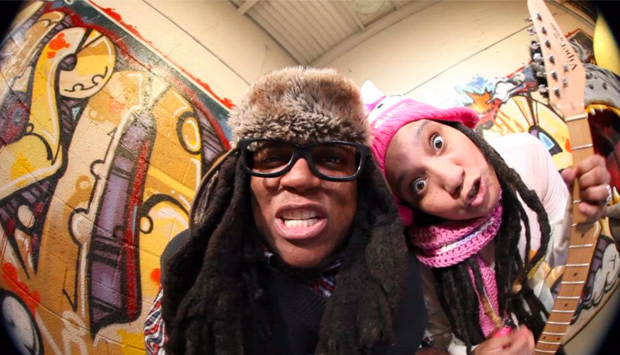 We caught up with indie animator Jim Lujan and Cleveland rap sensation Deacon Burns (who with partner Kaya Rogue is best known as Kounterclockwise) to talk about their bizarre, animated sci-fi musical adventure. You can also read our story on the film in the April/May 2014 issue.

Animation Magazine: You had previously collaborated on music videos for Kounterclockwise — how did the concept for the film develop?

Jim Lujan: We did three music videos; that’s how I met Kounterclockwise. I loved it — they gave me carte blanche to do what I wanted. They were fans of my work and said, whatever you see fit, just do it. They gave me the opportunity to just go crazy, and a lot of those ideas ended up in Forever-Land. After the first video we started saying it would be great to do a movie — I had heard that Outkast had at one point talked about doing a fantasy movie and it fell apart. I said, you guys should be the ones to do that! It was kind of always in the back of our heads. After the second video it just snowballed.

Where did you find inspiration for the film?

Lujan: When I started doing the first video, Kounterclockwise … they’re such a striking visual representation. Deacon’s in the chair, Kaya’s there, they look almost like superheroes. I thought, their music is so spacey I’m going to let their music take me to whatever world we need to get taken to. I’ve never done sci-fi but have always been a big fan. And if I’m going to do sci-fi, I have to put my mark on it — make it weird and funny.

How did the production process work with Jim in L.A. and the band in Cleveland?

Lujan: The movie was kind of built four minutes at a time. If we had a scene and we needed something I would just shoot them an e-mail like, hey, can you say this, or say something like this — it worked fine, we just pieced it together. I felt like they were in the next room! It was an exciting use of technology for us.

Deacon Burns: It’s weird, I’ve worked with people face to face for years, and I’ve accomplished more with Jim across the States than I have with people right in front of me!

Lujan: It comes down to being on the same page. We both have the same work ethic, and once we hit the ground we’re moving at full speed. It cuts out a lot of nonsense and distractions. We were really focused on this, and the keyword is we had fun.

Burns: We [Kounterclockwise] have complete faith and trust in Jim, there’s no doubt. It’s like, OK, Jim is drawing the scene, we know it’s going to be golden.

What kind of animation techniques or programs did you use?

Lujan: The method was really pretty easy. It was a real learning experience too, because I normally did all my cartoons or art by hand and then scanned them in and move them around in Flash. With Forever-Land, when I started in March 2013, I got a little Wacom stylus and slowly over the production of Forever-Land I started using that stylus more and using less and less paper. But primarily, about 60% of the movie is hand-drawn and scanned in. And as simple as it sounds, I edited it in iMovie!

When people ask me about getting into animation, I tell them you’re concerned about telling a good story. Concentrate on the story and make the production process as simple as possible. It’s about entertaining people, it’s not about ‘Ooh look at the fog, look how good the fog looks.’ Or the smoke. Or whatever effect. It’s about making people laugh and keeping them interested.

How did you guys hook up in the first place?

Burns: I’m a really big animation geek, I love all things animation. I always wanted to work on an animated video. It’s been a dream of mine to be involved in animation, make a movie or do voice-over work. I was on YouTube and came across one of Jim’s videos. I loved it instantly, it was so original and different. I sent him an e-mail like, yo, I’m in a group, you ever done a video before? I sent him a few songs and within two weeks half the video was done! I’ve never been in a situation where I could just rely on someone to do something for me.

Jim, you had a lot of other projects going on during the film production — how did you stay motivated and balance everything?

Lujan: That’s a good question! When Forever-Land first came up, I had just finished a cartoon called Unchained Fists — they hit me up and I didn’t have anything on my plate. I thought, I’m going to treat this like a painting, like I’m going out to the garage and painting a little bit each day, and I figured this movie is going to take as long as it takes. Whenever it’s done, it’s done. A few weeks later we had a big turnaround — I’d do night time sessions, an hour or 30 minutes here or there — really quickly we had like 15 minutes done.

We were really hitting our stride and right in the middle of production I got a deal with Titmouse Studio and Six Point Harness for their Rugburn channel for a series based on Sanjourno Must Die. And they did the same thing, gave me total freedom. So I created 10 episodes — I didn’t stop production on Forever-Land, but slowed it down. Then, at the same time, I started working on MasterFreak Theater for TV. Once I finished those I jumped right back into Forever-Land and finished it almost a year to the day after I started.

Is all the music in Forever-Land original?

Burns: Basically it’s 99% original music. The only song we had prior was “Hide and Seek,” when they go to see Madame Mesmerelda and she tells them about The Glove and Forever-Land and starts everything. We had wanted that song to be a video as well, but the idea basically got put into the movie. But all the other songs were original. We would go back and forth, sending beats to Jim or he would send us some guitar and sounds and we would send a beat back. Or I would see a scene and get inspired — it was a lot of give and take, back and forth.

Besides the website (forever-land.com), how are you getting the film out there?

Burns: We’re having it screened in Cleveland on April 24th, at the Atlas Theater. (The Greater Cleveland Film Festival is sponsoring it.)

Lujan: I’m working on getting some screenings out here in LA. We have a couple colleges that are going to play it.

Burns: … And it’s going to be out in San Francisco. CripHop — an organization for artists and rappers with disabilities — is showing it at the end of next month. And in Toronto we have a show with CripHop and they’re gonna show the film on April 11th and then we perform on the 12th. We’re also getting ready to hit up a mini tour around the U.S., and London in November. We’re going to show the whole film, then we’re going to come out and perform the songs and we’re going to have the characters dressed up on stage and in the crowd, like a hip-hop Rocky Horror Picture Show.

I’m hoping that during the summer we’ll air it in Cleveland again and have Jim come out here so we can actually meet in person!

Lujan: Other than screenings we’re looking at getting distribution, it will definitely come to DVD, we dream of getting it on iTunes and Netflix. We want to get the word out, give everyone a full taste of it, create a buzz and then get it out there officially. We’re good on our end, we know what we want from it. Now we’re looking at what people are bringing to us to show this.

Anything else you want our readers to know about Forever-Land?

Lujan: I just wanted to mention how good we feel that this movie features a person who’s in a wheelchair, but it’s not a sad “Oh, pity this poor guy,” thing. You talk about equal representation — this is a perfect example because we don’t even make an issue of it. Deacon is Deacon. It is about empowerment. You don’t get a fair shake, you just take it and run with it. One of things that attracted me to Kounterclockwise. what sold me on them was the music. He could have been an eight-foot tall albino giant, it didn’t matter. The music speaks for itself.

Burns: It was a blessing finding Jim. I broke my back in 2007. I was destroyed for a long time. For close to five years, I thought it was over, I’m just going to lay down and die. Kaya [Rogue] lifted me up, told me to embrace my music, embrace being in a wheelchair. As soon as I embraced it, that’s when things started happening.

Lujan: I believe that Kounterclockwise and myself, we have the talent and skills to be up there with the people who already have huge success, and I believe the way you get there is you take a step forward and you be real about it. People kind of thought we were crazy putting [the film] out for free right now, but that’s how you get the eyeballs. When people see this, it will speak for itself. The ultimate judge of this project is having people see it.

You can watch Kounterclockwise in Forever-Land at forever-land.com or follow the film’s page on Facebook for screening announcements. 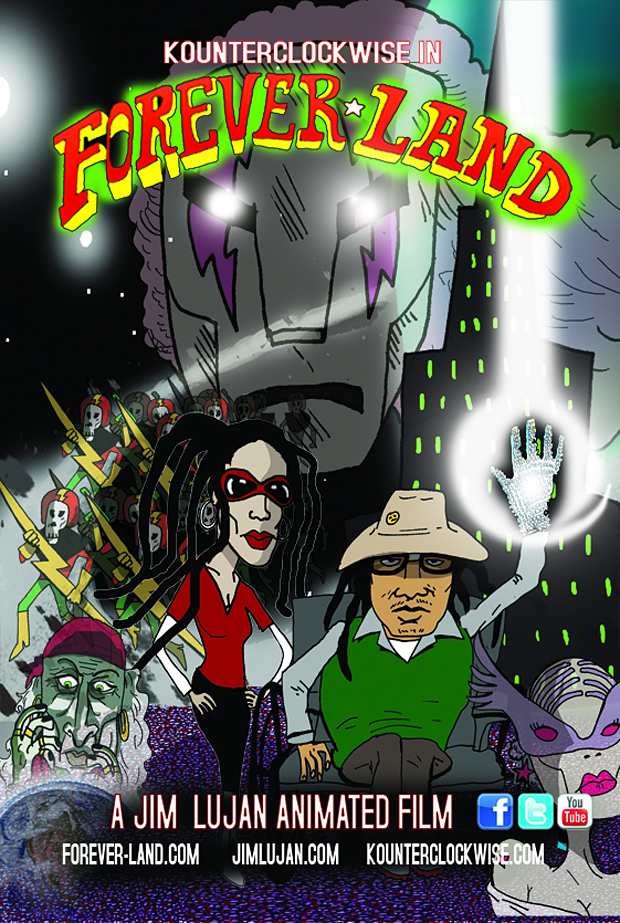