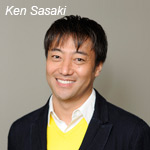 Ken Sasaki has been named the new president and CEO of San Francisco-based manga and anime distributor VIZ Media. Sasaki will succeed Hidemi Fukuhara as as of April 1st, 2012.

Sasaki joined VIZ Media in February of 2008 and most recently served as senior VP and general manager, where he led the company’s digital content distribution strategy for animation. Sasaki was a driving force behind developing relationships with industry leaders for the digital distribution of anime.

“We have spent the last few years preparing VIZ Media for its digital future,” said Sasaki. “I look forward to expanding our digital distribution channels even further, making manga, graphic novels and anime even more accessible to fans across North America.”

Fukuhara is to be elevated to Vice Chairman for VIZ Media at the end of the month, leaving the day-to-day operations to his successor. For more information, visit www.viz.com.

The Most Deliberately Forgotten Man in Animation
‘A Poem Is…’ Debuts New Episodes on Disney Jr.