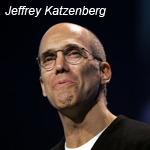 It looks like Jeffrey is going to stay at the Shrek House for at least another five years. An article in the Hollywood Reporter revealed that the CEO of DreamWorks Animation Jeffrey Katzenberg has extended his contract through 2017. Under the terms of the deal, his salary will increase from $1 million a year to $2.5 million. (Woo ha!) He will also be eligible for annual cash bonuses of $4 million. He will also be eligible for long-term equity incentives of $4.5 million. Under the new terms, if DreamWorks Animation undergoes a change of ownership, Katzenberg would receive his compensation for the rest of the existing contract or for two years, whichever is longer.

Planet Nemo Scores Sales for ‘Groove High’
And Now, For Something Completely Different…