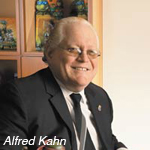 Michael Goldstein will serve as interim chairman while the company searches for a new CEO.

“After almost 25 years, I have reached the point in my career where I want to relinquish my responsibilities at 4Kids,” said Kahn in a statement. “The last several years have been particularly difficult and demanding with the business of 4Kids being buffeted by the financial crisis. After helping steer the company through challenging times, I have decided that it is the right moment for me to retire. I believe that going forward, Michael Goldstein and the team of experienced 4Kids executives will do an excellent job for our clients and for our shareholders”.

4Kids also is continuing to explore a variety of strategic alternatives, including a review of the capital structure of the business and a possible sale of all or a portion of the company’s stock or business.

“We have an exciting year ahead with a Yu-Gi-Oh! 3-D movie scheduled for release in the U.S. in late February 2011,” said Goldstein. “We are encouraged by the performance of our five-hour Saturday morning block of Japanese animation, called ‘Toonzai on CW 4Kids,’ our website 4Kids.tv and our new video portal ‘Toonzaki.’ 4Kids is also negotiating for merchandise licensing rights and television broadcast rights to a number of promising new properties which we hope will create future revenue streams for the company.”

You may also like...
Related Topics:4Kids, Alfred Kahn, Michael Goldstein